I’m fairly certain the title of this post leaves little to the imagination about this “mysterious” BIG, HUGE announcement. So without further ado, I’m so, so happy to announce that my husband Zach and I are expecting a little baby girl in January!!

Here she is, folks. 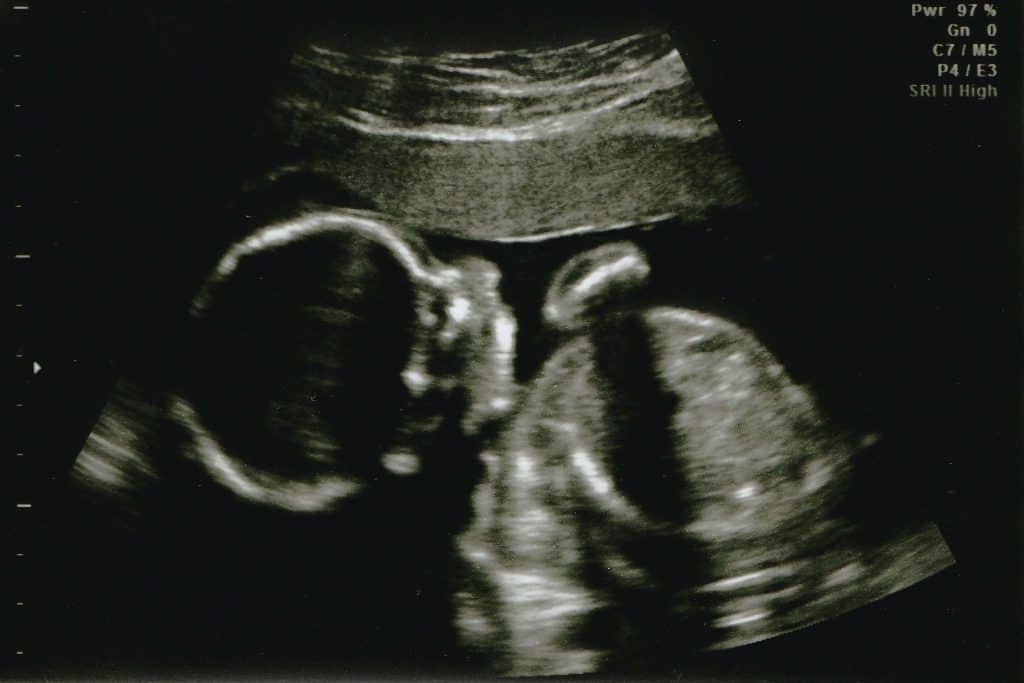 I’ve been dying to tell y’all. First of all: because it’s SO EXCITING! Second of all: because being pregnant has created some interesting situations with food blogging. I haven’t had many food cravings (although the other day, I woke up NEEDING a brownie in the worst way, so I made a brownie in a mug– a dangerous game indeed). Rather, I’ve had tons of food aversions, especially when I was in the first trimester. It’s all a bit fuzzy, but I spent most of June and July on the couch hating any and all food. I know… right? ME? Hate food?!

This was especially difficult as I had just quit my full-time teaching job in order to become a full-time food blogger who all of a sudden HATED food (and yes, this was part of the plan… I’m so excited to be able to work from home with a flexible schedule so I can stay home with my little girl!). I went through about a month and a half of despising chicken in all forms (thankfully, that’s over). I still won’t go near garlic (what?!) and I don’t like spicy foods (SERIOUSLY?!). Pre-pregnancy Elizabeth would have scoffed at my delicate palate and newly developed love for Annie’s boxed macaroni and cheese, but pregnancy will do some really weird things to you. REALLY weird things.

So for a time, I was posting less frequently than usual and only when I could drag myself off of the couch to the kitchen and computer and whip up something that didn’t make me nauseous (and this ginger tea helped immensely!). I skipped my last income post (but will bring another one to you soon- promise!). But I’m back in the game ready to bring you all kinds of yummy, healthy things :-)

But first, this cake. 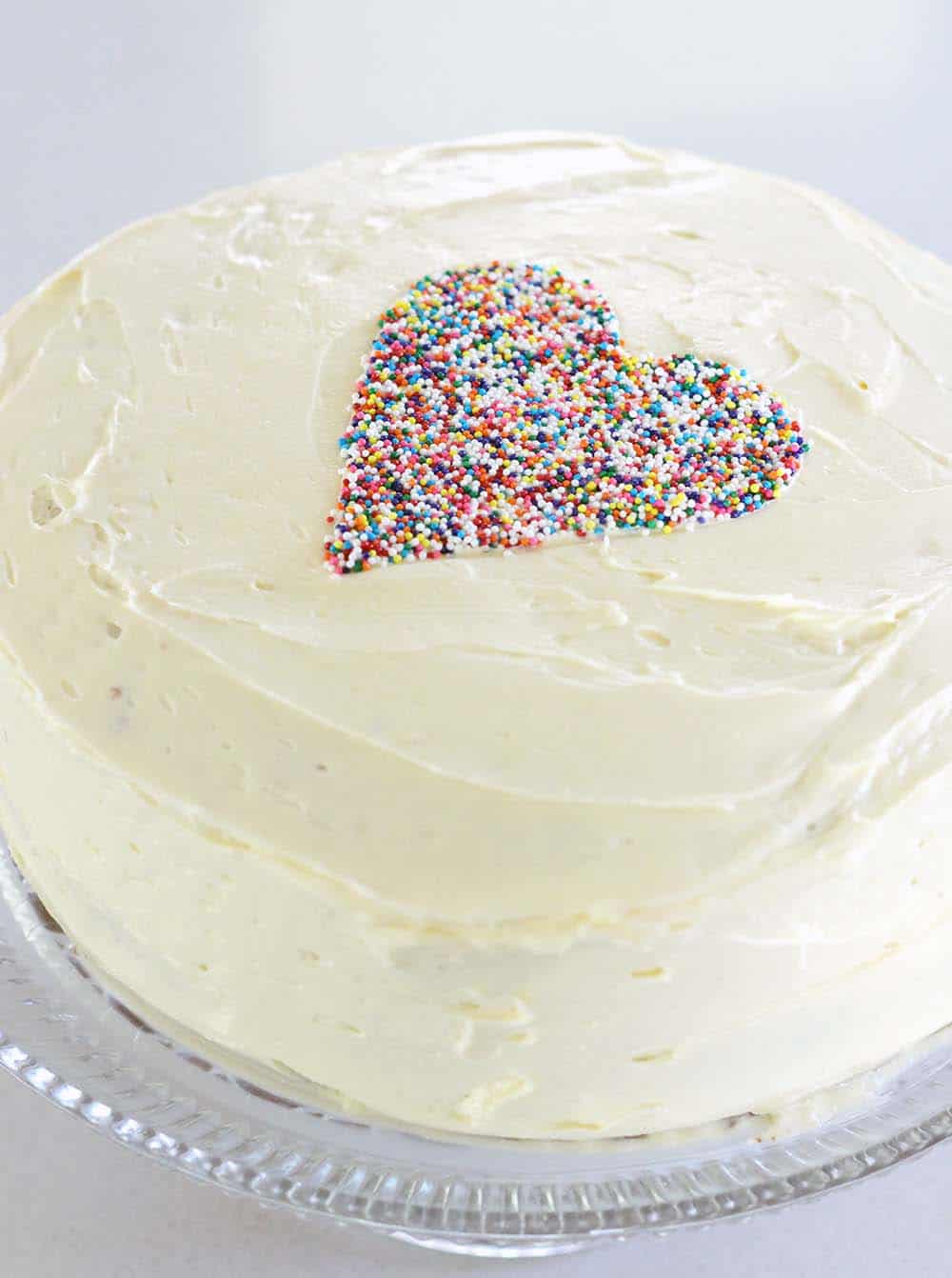 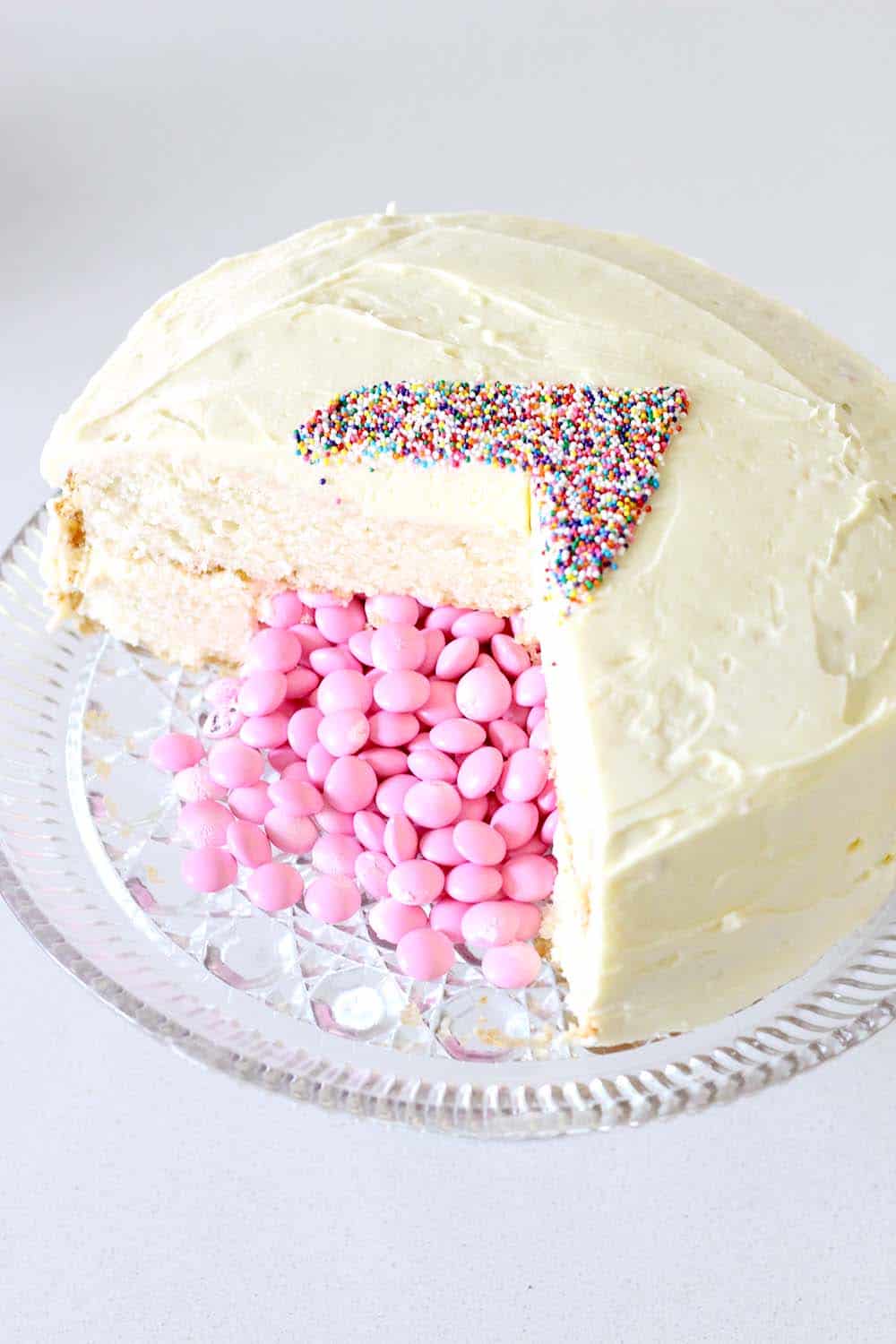 And you thought the ultrasound picture was adorable!

This is your typical, delicious, sugar-filled white cake with buttercream frosting… but with a twist. It’s filled with pink chocolate covered candies (similar to M and Ms) to reveal the gender of our little baby. No “real” food here, folks. Not for this special occasion!

Spritz cookies are another easy way to reveal gender.

Zach and I found out about the gender a little less than two weeks ago, and somehow kept the secret from our families until Sunday, when we had an official gender reveal. Our moms both cut the cake together (and my dad and sister video chatted in) to find the inside filled with pink. It was 10% cheesy and 90% awesome :-)

The cake was actually very easy to put together. I put together a step by step photo tutorial for y’all. Here it is! The instructions are written out in the recipe card below, and the image is there as well so if you print it, it should show up. 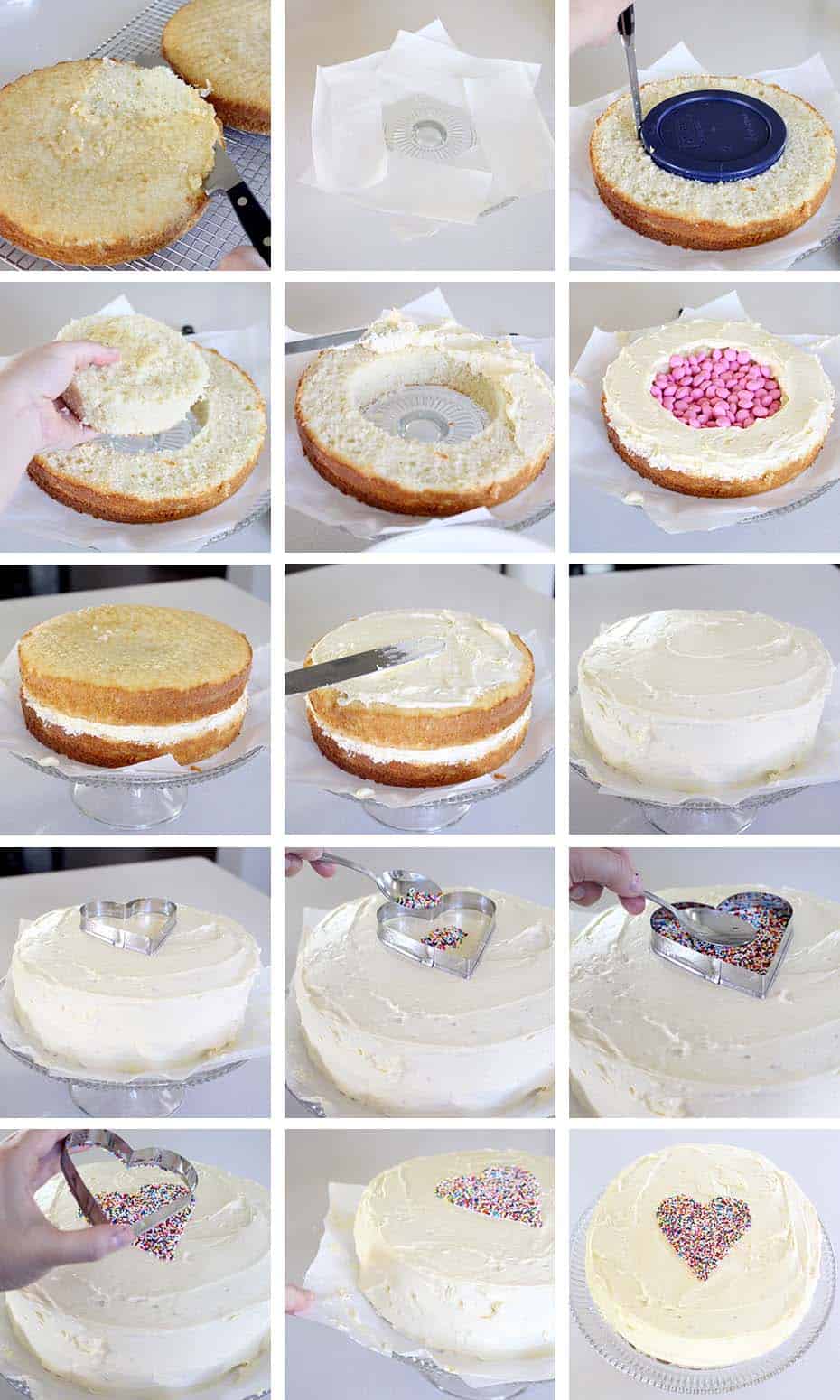 This isn’t a recipe for the cake or the frosting- just the tutorial. I used the Cook’s Illustrated’s white cake recipe, which makes two layers and came out absolutely perfect. It has both vanilla and almond extract in it, giving it an extra sweet richness. If you choose a cake with three layers, just adjust it so you cut a hole in the bottom two layers, rather than just the one bottom layer.

I made vanilla almond buttercream frosting. I wanted as white of a cake and frosting as possible so the color of the M and Ms and the sprinkle heart would stand out, but you can use whatever kind of cake and frosting you like. I won’t judge you if you use a boxed mix, either. 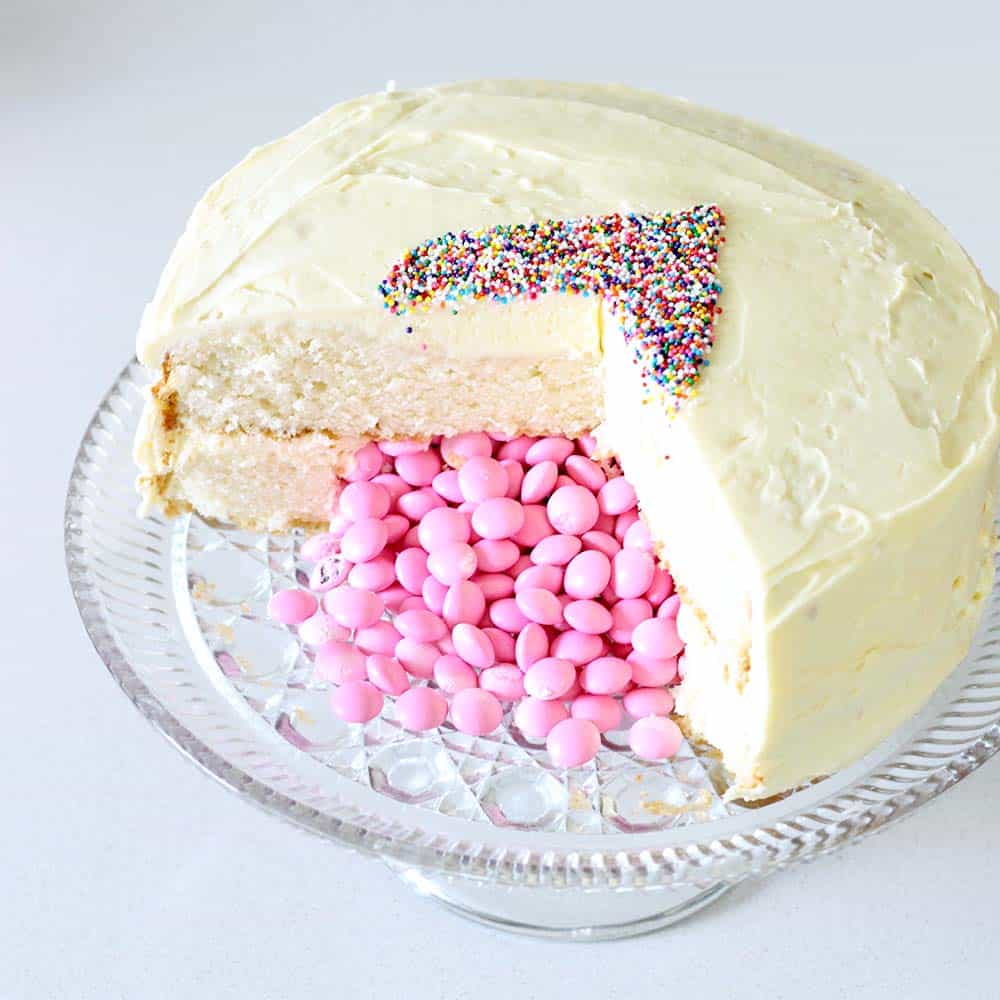 One final thing- when cutting into the cake, make sure you have your camera ready, someone taking a video, and instruct the cutter(s) to make a large wedge, so it’s easy for everyone to see the candy on the inside.

So there you have it! Phew, it feels good to get that off my chest. Now if you’ll excuse me, this baby wants some of the leftover cake that’s lingering in our fridge and I’m not about to deny her it. I love her too much. 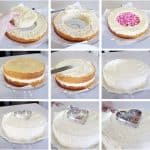 As an Amazon Associate I earn from qualifying purchases. DISCLAIMERS
925shares
925shares