Unless you live under a rock, you’ve likely heard about crispy smashed potatoes. Small potatoes are boiled, then smashed, then baked. They’re delicious, and they’re even BETTER when they are seasoned with everything bagel seasoning!

These Everything Bagel Crispy Smashed Potatoes are a yummy gluten free side dish that’s perfect for breakfast, lunch, or dinner. 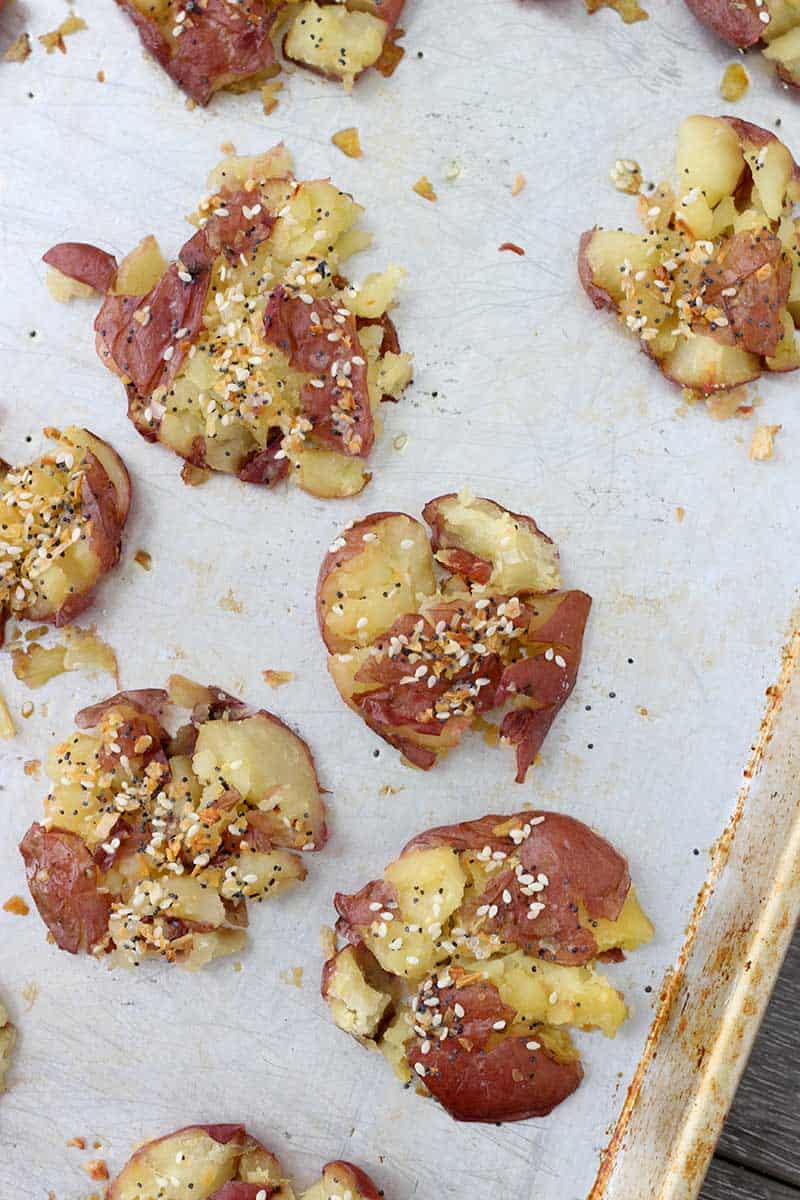 There are a few tricks to getting these puppies extra super crispy, which I’ll share with you.

First, use very small potatoes. The smaller the potato, the shorter time it will take to cook to a crisp in the oven (and, in general, this will save you time).

Second, use uniformly sized potatoes. I bought a two pound bag of baby red potatoes at the store, and sorted out about half of them that were the same size, since many of them were significantly smaller or bigger than the others.

This will ensure that the potatoes will all cook at the same pace, without some burning up while others are underdone. 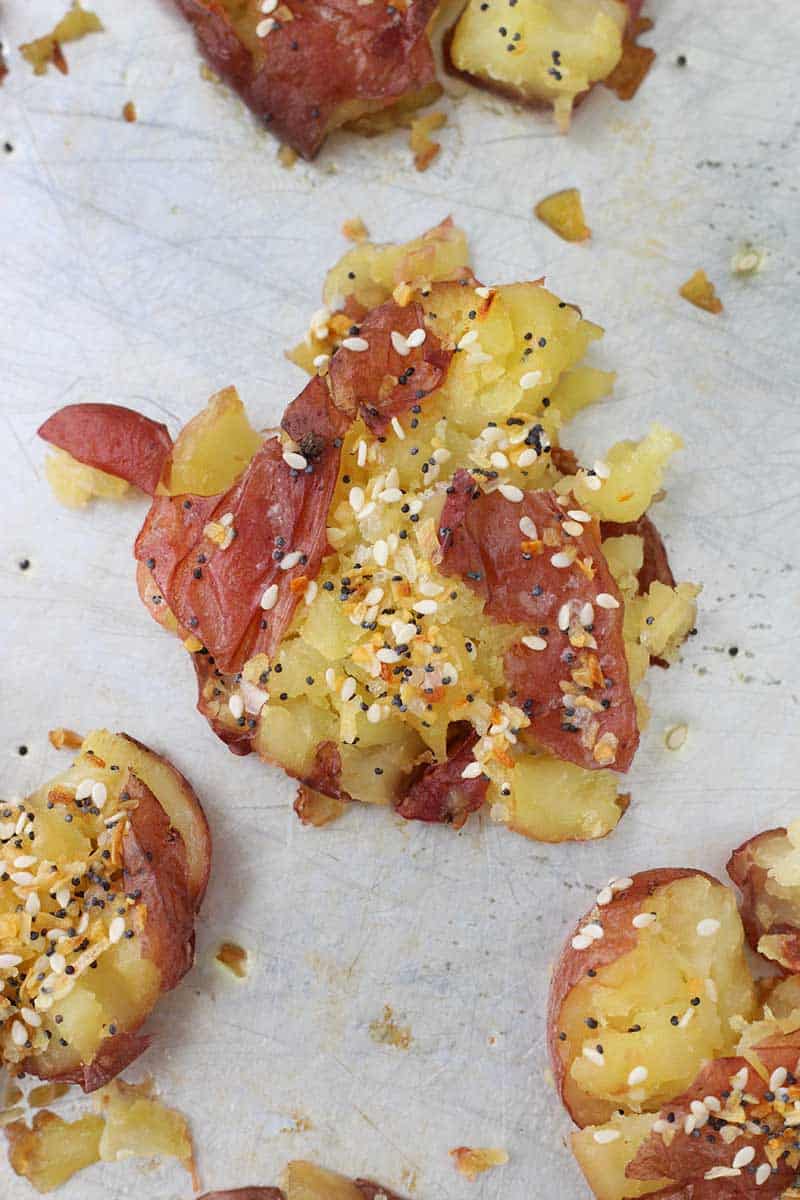 Here’s another trick I learned from Nagi at Recipe Tin Eats: after smashing them, allow them to cool for a bit before cooking. This will allow much of the steam to release, and thus the moisture, creating a dryer surface with which to add the oil and butter.

And speaking of oil and butter: use both. Butter helps create a deep golden color, while oil helps create crispiness. Both are ideal for this recipe.

Salted butter works best for this recipe. Potatoes need a LOT of salt, since they are so bland. The everything bagel seasoning will have some salt, but the salted butter adds just the right amount of extra salty taste.

I also melted the butter and mixed the everything bagel seasoning into it, before brushing it on the smashed potatoes. This helped coat the spices, which helped them to toast perfectly during roasting without burning. 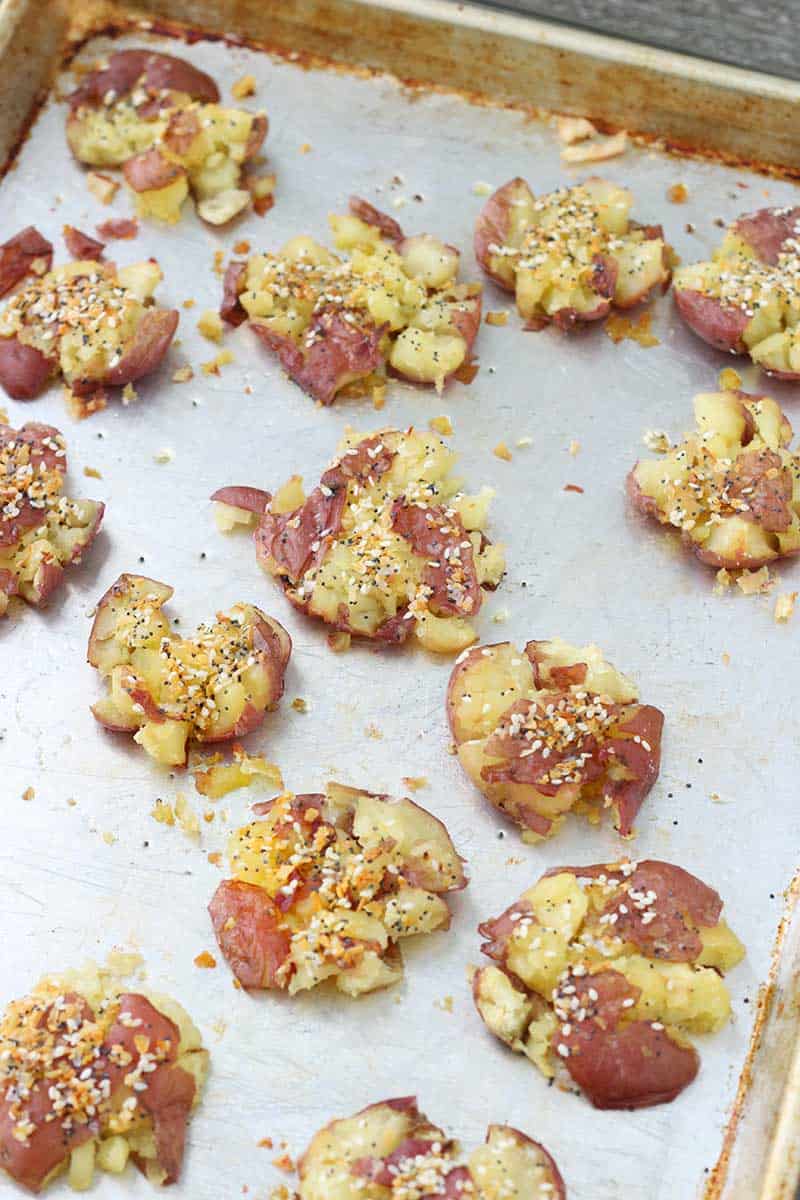 When you actually smash the potatoes, it can be a bit tricky. They will want to fall apart, and it’s totally fine if they do – they will still taste fabulous. But ideally, try to keep them in one piece.

I recommend using a potato masher to smash them, as it will create more nooks and crannies for the butter and spices to cling to.

However, it can be a bit challenging to use a potato masher, since parts of the potatoes come through the parts and it can fall apart more easily.

If you want an easier smashing tool, use the flat bottom of a drinking glass, such as a pint glass. Bear in mind, however, that this will create a flatter surface with fewer nooks.

You can also use a fork (a la peanut butter cookies). 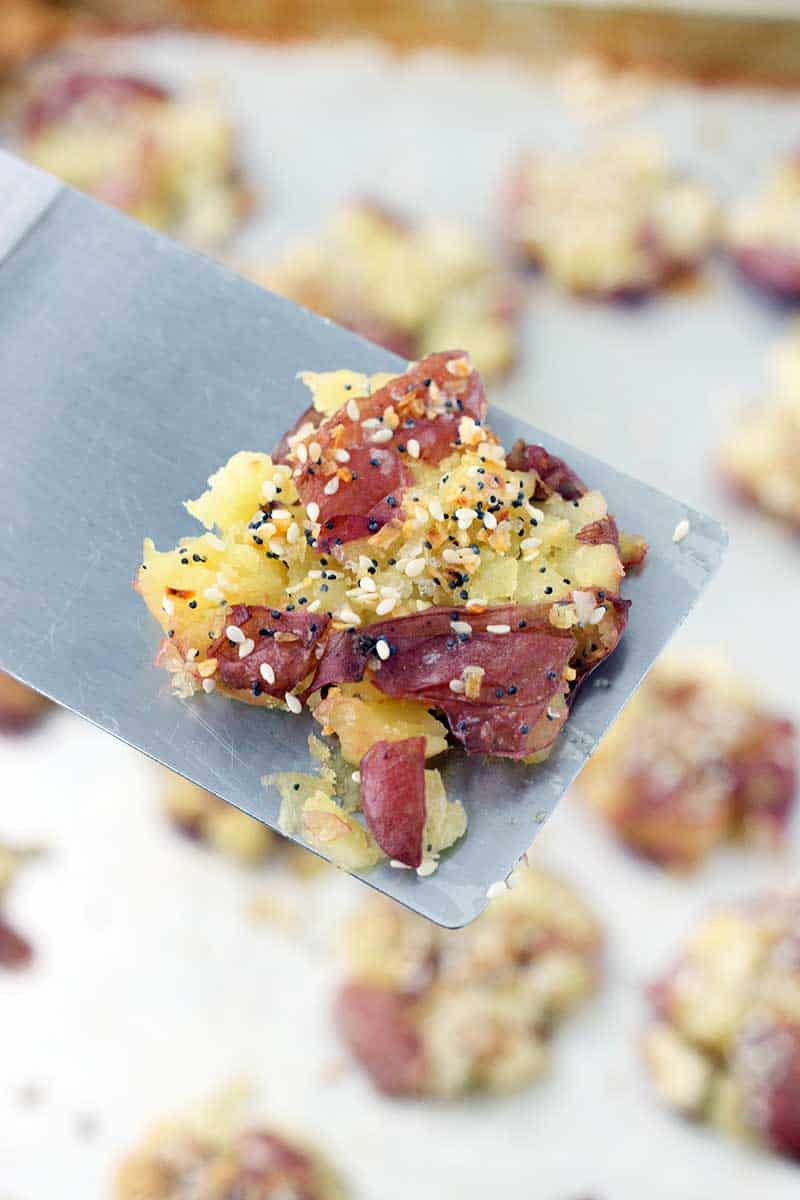 If you like these Everything Bagel Crispy Smashed Potatoes, you’ll love these Roasted Potatoes and Onions with Rosemary and Mustard, these Mini Hasselback Potatoes with Creamy Dill Dip, these Mashed Potato Cakes, and these Twice Baked Potatoes.

You can probably get everything bagel seasoning already mixed at your grocery store (Trader Joe’s has it for sure), or you can make your own. 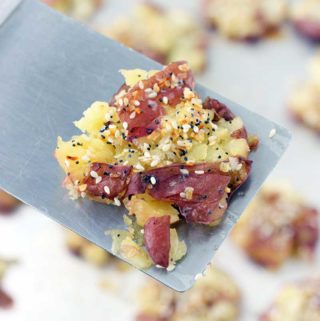 As an Amazon Associate I earn from qualifying purchases. DISCLAIMERS
734 shares
734 shares