Cooking cornbread in a skillet is a staple in Southern cooking, and in my opinion, the ONLY way to cook it. This honey skillet cornbread is only slightly sweet, it’s moist, and it has amazing caramelized edges from contact with the high heat of the cast iron. Topped with a pad of butter and drizzled with extra honey, it’s an amazing side for chili, soup, or BBQ. 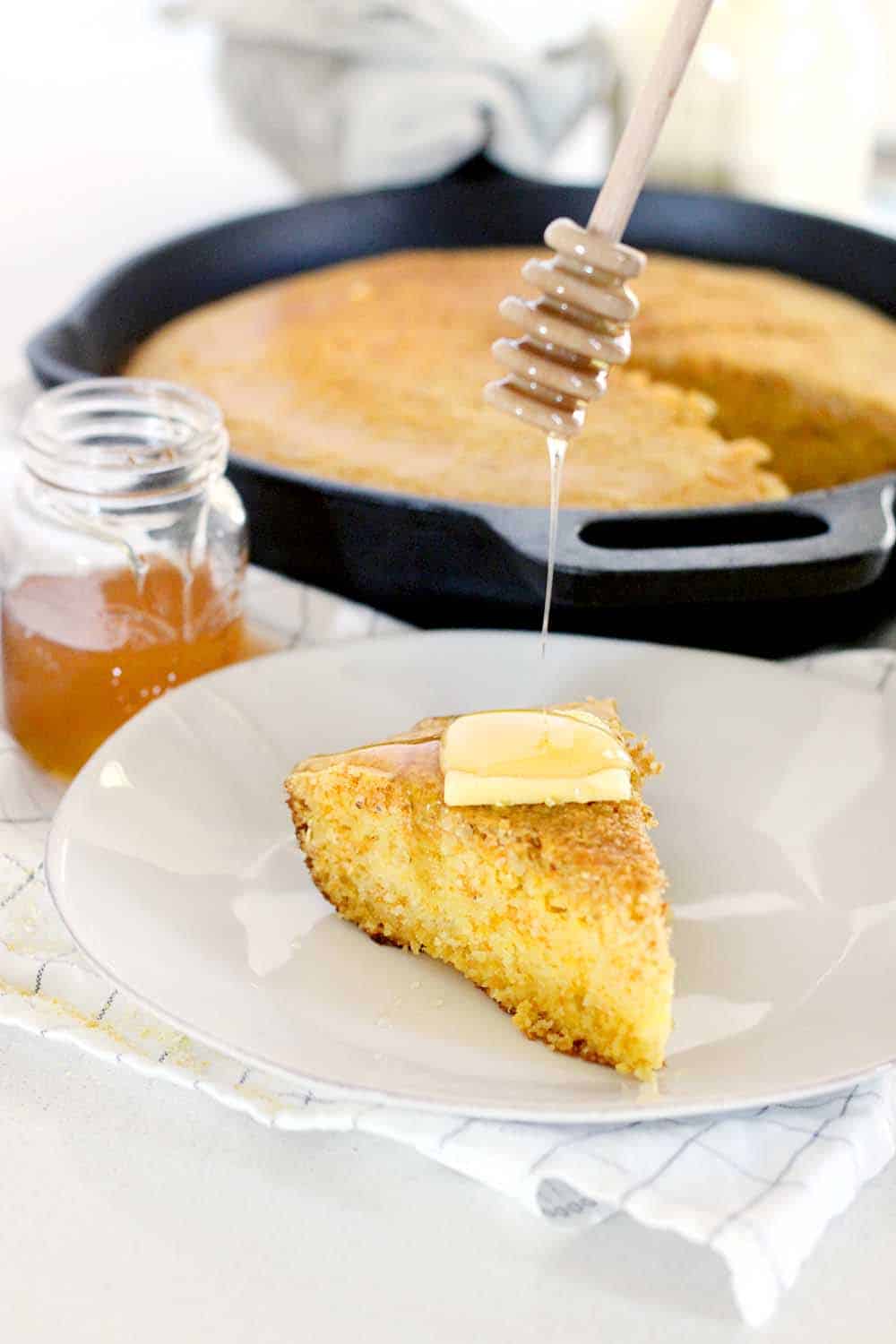 Oh and I should tell you… I used bacon grease to cook this. So, EXTRA yum! (I included a vegetarian alternative in recipe below, although I highly recommend using bacon grease for that true Southern cornbread experience.)

I’ve been trying to keep, and use, bacon grease more frequently. Why? Well, the biggest reason is that I hate wasting good food. If you’re cooking bacon anyway, saving the bacon grease is a great way to preserve a free ingredient. In addition, it adds amazing, smoky depth of flavor to your recipes- soups, casseroles, or even salad dressings! Finally, I feel better about using a natural fat from meat that responds well to high heat than some other highly processed alternatives (like vegetable oil). 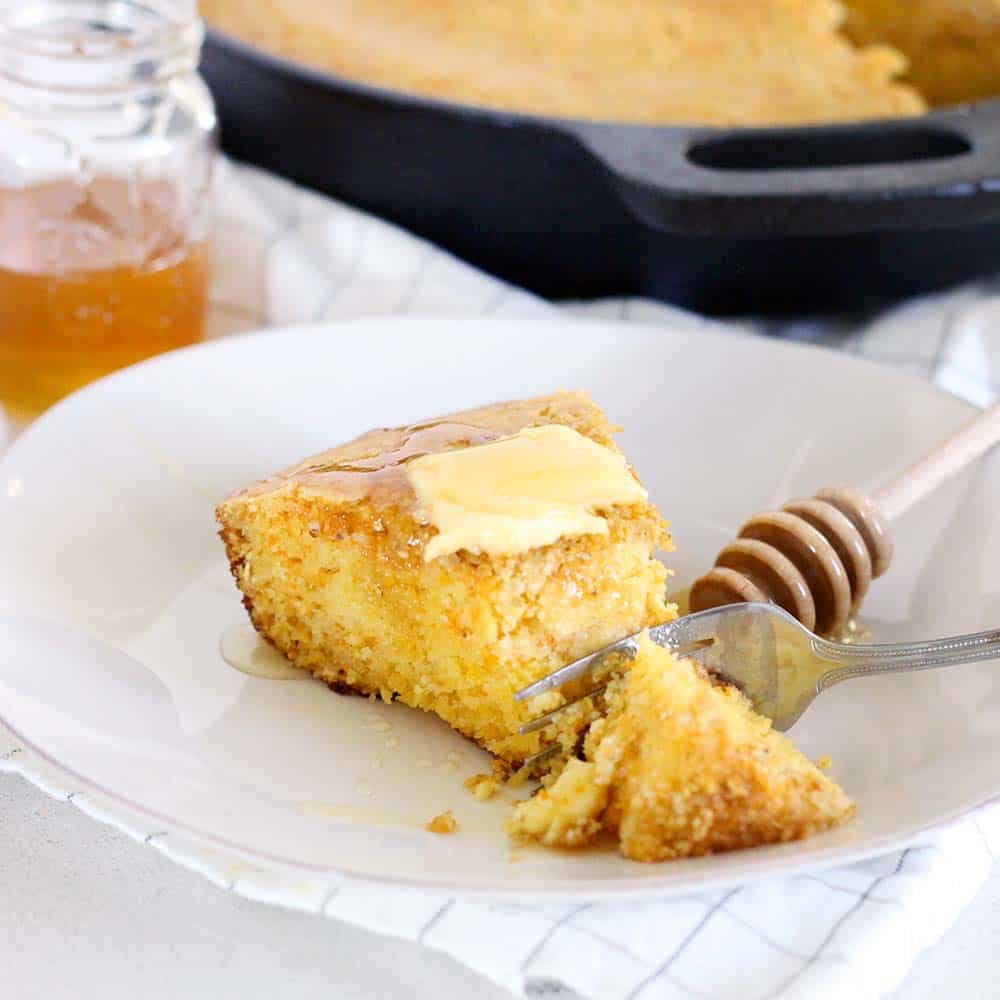 I just keep a mason jar in the fridge with a piece of cheesecloth folded over itself twice in between the jar and the lid. When I cook a batch of bacon, I pour the grease through the cheesecloth into the jar. This helps filter the solids and burned pieces from the usable fat. Then, whenever I need to use it for a recipe, I just grab the jar from the fridge and measure what I need!

Where I live (Texas), there’s a bit of a controversy as to whether you should include sugar in your cornbread. In The Homesick Texan (where this recipe is adapted from), the author Lisa Fain argues that Texans never, ever add sugar to their cornbread. It seems to be as big of a deal as not adding beans to chili.

But I like beans in chili (gasp!). I don’t want to stop just because I HAPPEN to live in Texas. And I like my cornbread only a little, teeny bit sweet. So I chose to add just a little bit of honey – only 1/4 cup total – to this recipe to find that balance. If you have it with spicy chili or bbq, the sweetness will help balance out the flavors a bit. And if you like your cornbread REALLY sweet, you can add more honey to the batter or drizzled on top. 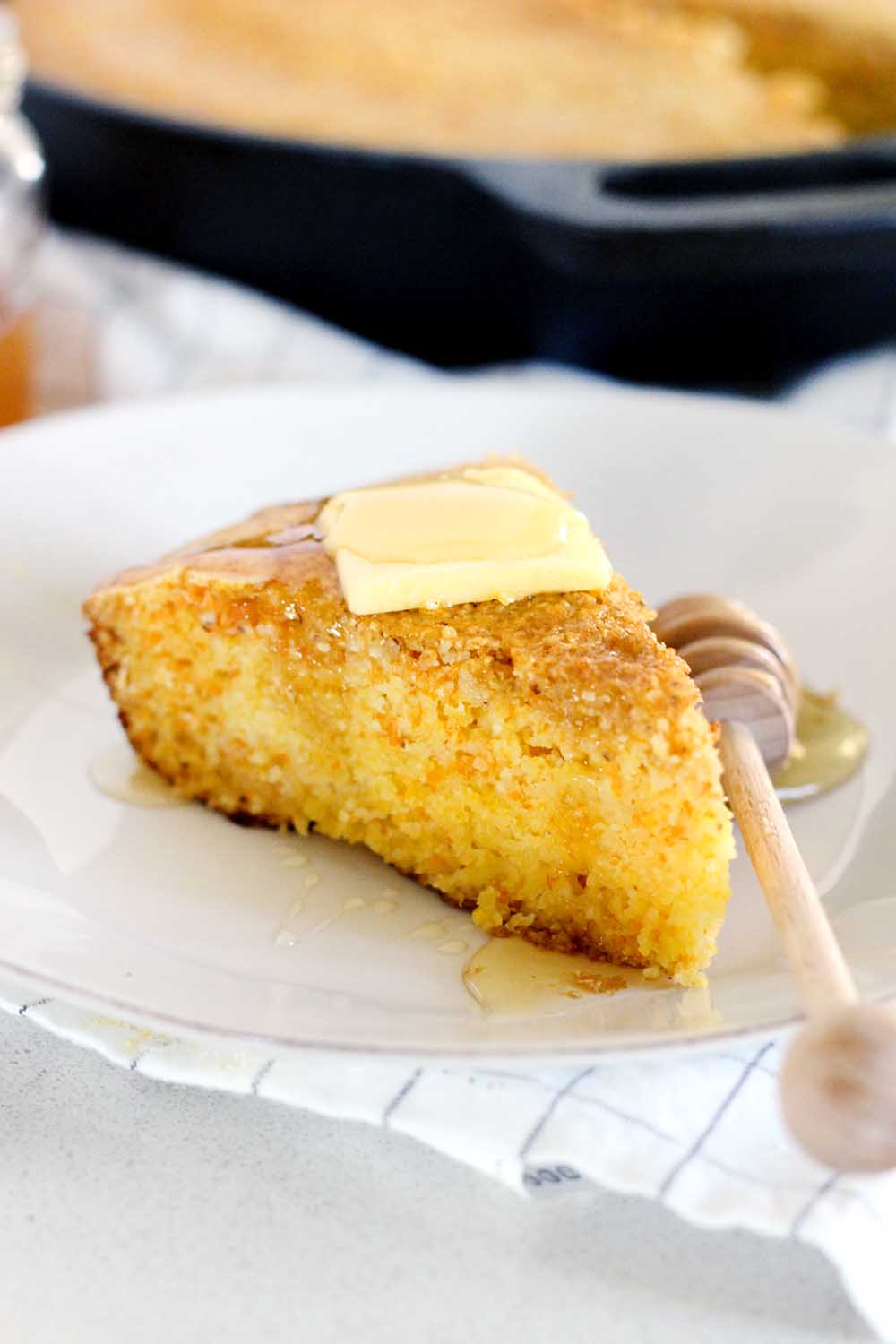 Here’s the basics of cooking cornbread in a skillet.

First, you’ll preheat the skillet in the oven while the oven warms up, WITH the bacon grease or oil in it. When the oven is heated, you’ll pour the grease into the batter, and then you’ll pour the batter into the skillet. It makes the most awesome sizzling sound when you do this, and because the cast iron is already so hot, it begins to cook and crisp up the edges of the cornbread immediately. Then, you’ll just bake it like normal until it’s cooked. It’s really very easy.

If you don’t already own a cast iron skillet, I HIGHLY recommend getting one. I think it’s the best cookware on the planet, especially considering how affordable it is. If you use it properly and season it correctly, it creates a natural nonstick surface that is so effective, you can even fry an egg on it without it sticking (here’s a post where I go into detail about how to use, season, and care for a cast iron skillet). Because they are so heavy, the iron retains its heat and disperses it evenly throughout the pan, making food cook more evenly. It gets VERY hot, so it’s able to create a perfect sear on important things like steak. You can use it on the stovetop or in the oven, or both. You can use it to make pizza. And although it’s heavy and can be somewhat intimidating if you aren’t used to it, I assure you that the pros outweigh the cons.

In summary: get one!

Recipe for honey skillet cornbread below. You might also like this sweet and spicy Jalapeño Cornbread. Enjoy! 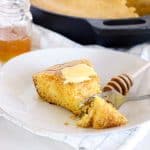 As an Amazon Associate I earn from qualifying purchases. DISCLAIMERS
157shares
157shares