Jump to Recipe - Print
5 from 5 votes

This Maple Cinnamon Pudding takes 10 minutes to make and tastes just like a snickerdoodle cookie in pudding form! It’s refined sugar free, sweetened only with maple syrup, and is a perfect gluten-free make ahead dessert. It comes out luxuriously thick and creamy every time and is so easy to make from scratch!

I originally shared this recipe in June, 2015 on my blog with a big announcement: that we were moving from Salem, MA to Austin, TX. And so it only seemed appropriate to revamp this post with new photos, improved instructions, and a similar announcement…

We’re moving back to New England! More specifically, to Rhode Island. In March! We’ve been busy packing, our house is being listed this week, and things have been generally a bit crazy over here. But we are over the moon excited to bring our little family up to the land of seasons and stuff our faces with as much seafood as possible.

And what better way to celebrate a New England homecoming than with a recipe heavy on pure maple syrup? You’re going to LOVE this easy maple syrup dessert recipe that tastes just like a snickerdoodle cookie!

How to make Maple Cinnamon Pudding

I’ll be honest: I usually just use store-bought whipped cream to top homemade puddings. But it’s actually very easy to make your own whipped cream from scratch, and healthier because you can control the ingredients in it.

I recommend making a vanilla whipped cream to go with this maple cinnamon pudding dessert. Just beat together 1 cup of heavy cream with 1 teaspoon of vanilla extract until stiff peaks form. It won’t be very sweet- if you prefer sweeter, you can add 1-2 tablespoons of sugar or maple syrup as well.

How can I make this pudding dairy free?

Just use a plant-based milk and skip the butter (or use a vegan/dairy free substitute like ghee) stirred in at the end!

Can I make this pudding vegan?

I’ve never made a vegan pudding and I’m not sure about a substitute for eggs. You might want to check out this recipe for vegan vanilla pudding for some more information.

Can I make it paleo?

Yup! Use almond milk, ghee instead of butter, and arrowroot powder instead of corn starch.

How long does this stay good for in the fridge?

This Maple Cinnamon Pudding will stay good for about a week in the fridge covered in an airtight container. You may notice some liquid separating out on the surface after a while – you can just pour it out or stir it back into the pudding before serving.

I tend to keep things mostly recipe-focused on my website, but if you want to see more about our move to New England please make sure to follow me on instagram where I share personal updates more frequently! 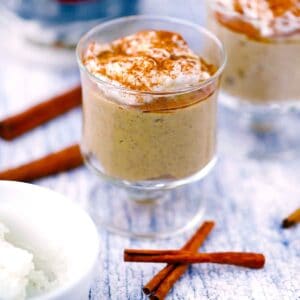 This post originally appeared on Bowl of Delicious on June 9, 2015. It has been republished with new photos, improved recipe instructions, and more pertinent information.

« Cranberry, Goat Cheese, and Pecan Salad
Norwegian Heart Waffles (Vafler) »
Did you make this recipe? I'd love to hear how it went! Comment and rate it below :-)