Jump to Recipe - Print
No ratings yet

Before you flee in terror at the word “fennel,” hear me out.

I am one of the few people under the age of 82 who loves the taste of licorice. I’m the one that jumps at the black jelly beans when no one else will eat them, and I LOVE Good and Plenty. Hey! Stop looking at your computer screen with that look of disgust.

That being said, the majority of the population, my husband included, hates the taste. In fact, I came across these particular fennel bulbs because my friend got them in her CSA box and pawned them off on me (along with some excess potatoes) since she, too, hates the taste (YAY for me! It’s like the black jelly bean of sustainable produce!). Because fennel and anise have a licorice flavor, many people avoid them. And even though I love the taste of it, I also love my husband, so I set out to experiment with how to make something he and I would both like from my surprise new gift of fennel and potatoes. 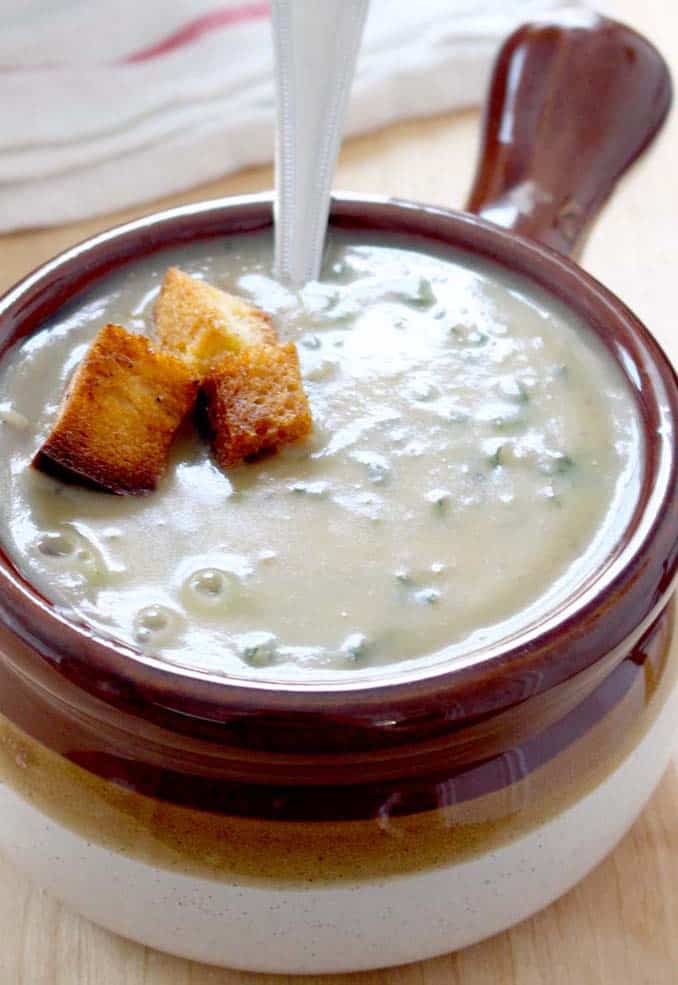 The solution for minimizing the licorice flavor? Just cook the fennel for a very, very long time- long enough to caramelize it.

This soup was the result of the fennel and potatoes and also a forgotten bunch of kale that I had meant to use last week but did not. The result: this creamy soup that’s 100% vegan and 100% delicious. 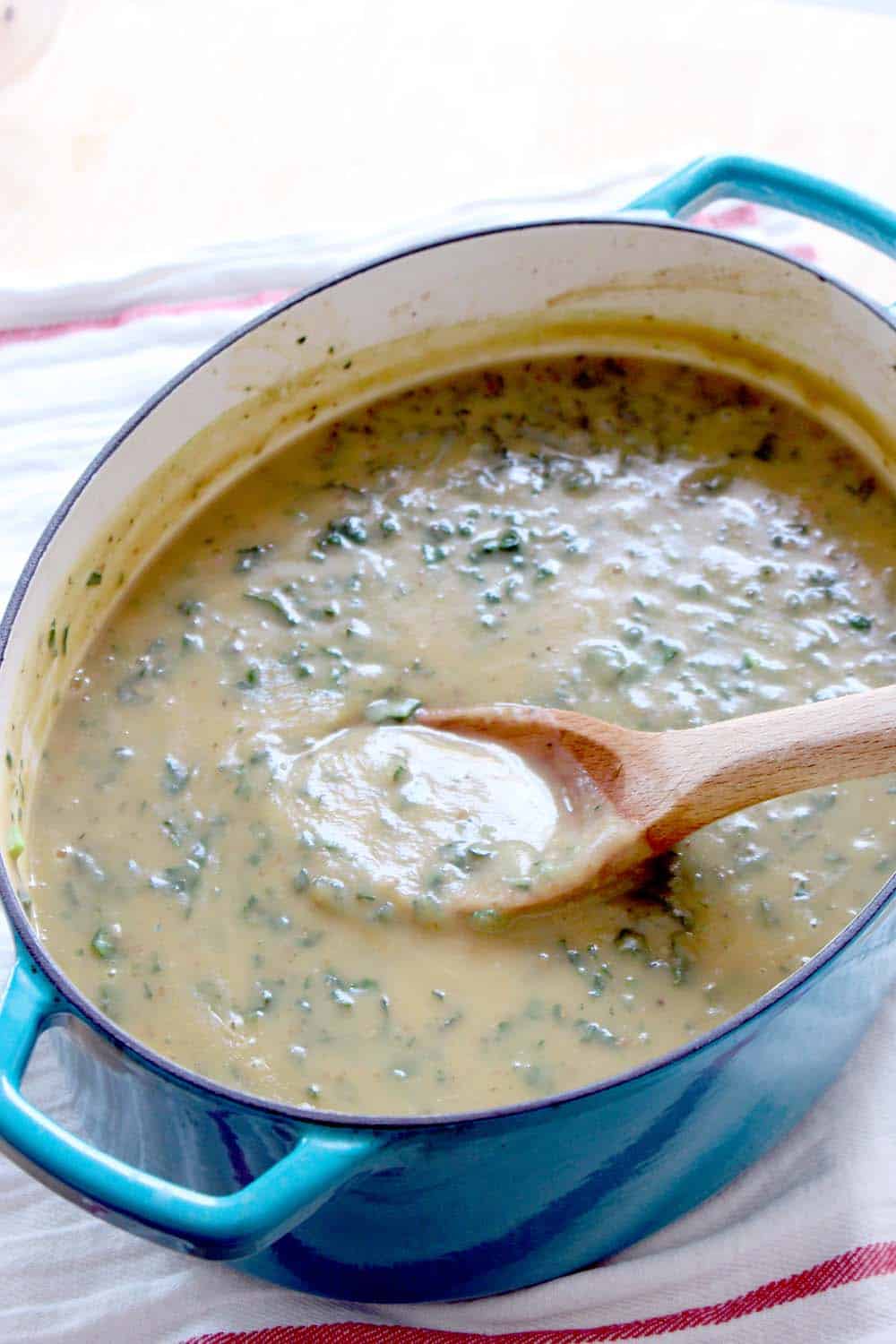 The first step is to caramelize the fennel with some onions. This is one of those tasks that takes quite a long time but requires very little effort- something that you can do when you have a few hours and can get some household chores done or catch up on the latest episodes of The Pioneer Woman (love her).

To caramelize the fennel and onions, use a heavy pot with a thick bottom. I used my blue Cuisinart enameled cast iron dutch oven (which I LOVE, especially for making whole roast chicken). Heat 2 tablespoons of olive oil over medium heat and add the sliced fennel and onions. The most important part of caramelizing: do not use high heat. It may seem like there are a lot of vegetables, but because the liquid in them will slowly evaporate, they will shrink down considerably. Stir the vegetables around to coat in the oil, then leave alone for 15 minutes. Come back to the pot, stir, and if starting to stick, add a couple tablespoons of vegetable stock or water to the pot. Allow to sit for another 15 minutes, and repeat. It should take about an hour for them to caramelize properly- you will know you are done with the vegetables turn a deep brown color and reduce in size significantly. 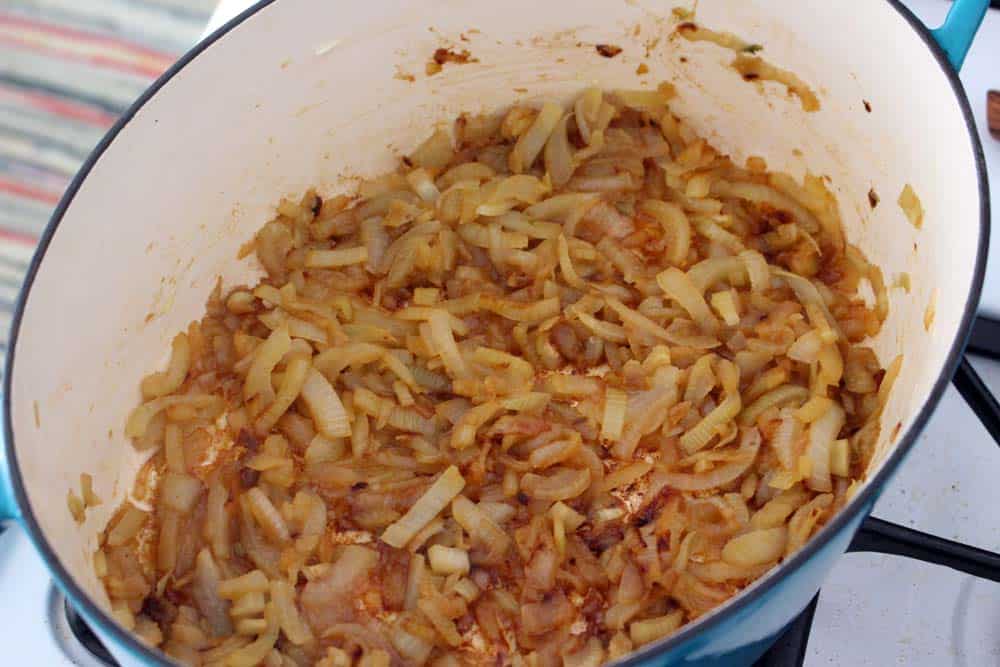 Once the fennel and onions were caramelized, I added some garlic, vegetable stock, diced potatoes, and plenty of salt and pepper. When the potatoes were cooked, I blended the soup using an immersion blender (one of the most handy, awesome kitchen tools you can have!). You can also use a regular blender, or just mash the veggies with a potato masher (this will make it more lumpy, but still tasty!). The potatoes will thicken the soup to a creamy texture, so you don’t need to add milk or cream to make it have a creamy consistency. That being said, if you want to add some cream or whole milk to the soup, now would be time time :-) 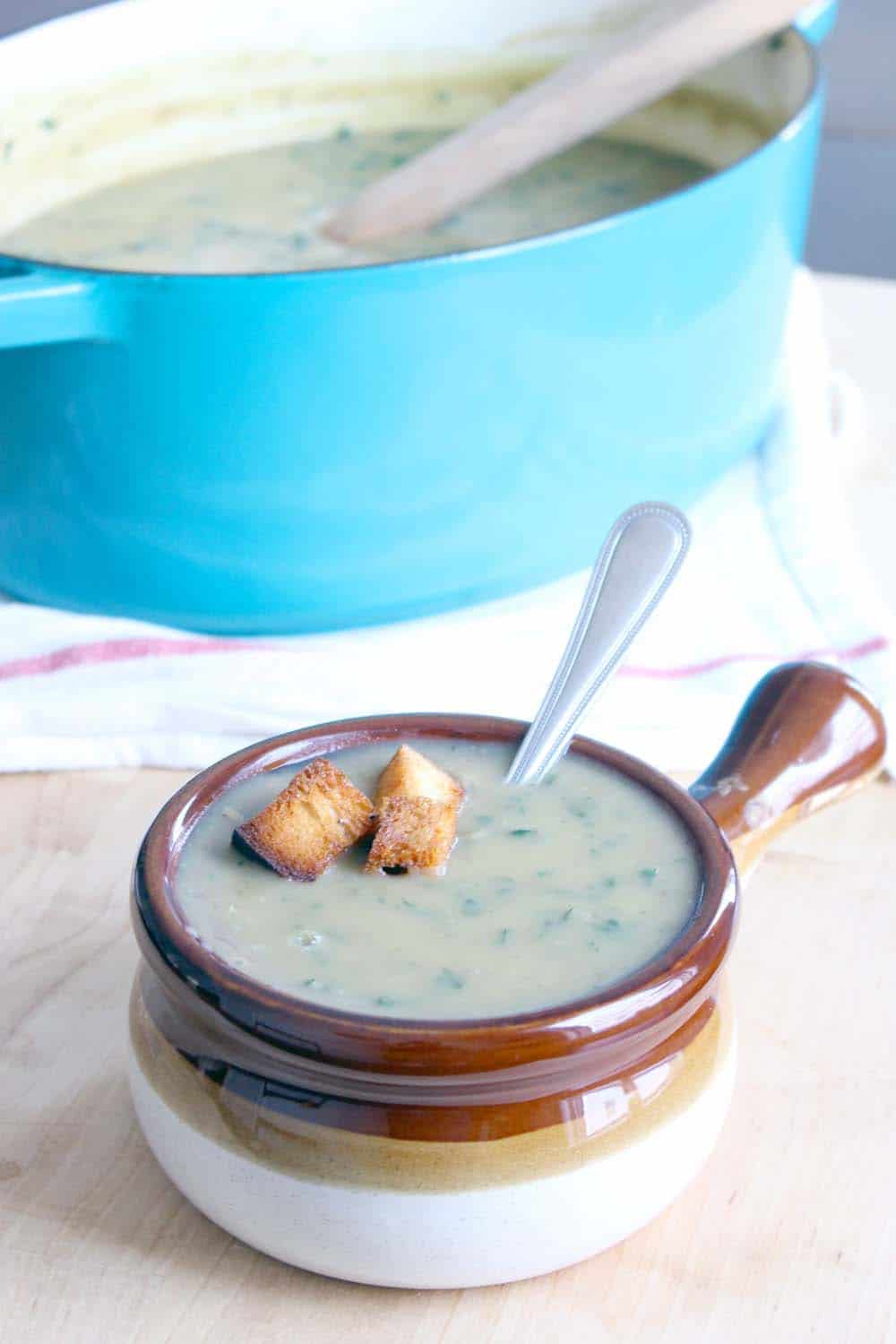 After that, I added chopped kale and allowed the heat of the soup to wilt it. You can theoretically use any chopped green you want- spinach would be awesome, or chard or turnip greens.

Make in advance: Make this soup on the weekend in advance, allow to cool, and store in your refrigerator directly in the pot you cooked it in. When you are ready to eat, just remove the pot from the fridge and heat up for a quick meal!

Freezer directions: This soup is freezable in an airtight container for up to 6 months. When you make it, divide the soup in two, freeze one portion, and eat the other portion, so you have a meal for the future ready to go! 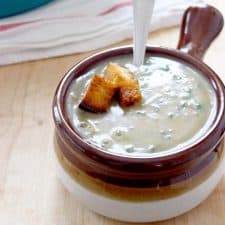