This. This is going to change my life. An Easy Chicken Tikka Masala recipe from the comfort of my own home? In only 30 minutes? Yes, please!

And it’s guaranteed to be healthier, and cheaper, than your favorite Indian restaurant, without sacrificing taste!

Don’t be scared because you’ve never made it before- it’s SO EASY to make. Promise.

Indian food is one of my favorite things to eat, but living in a small town, we have to drive at least a half an hour to the closest Indian restaurant.

This easy recipe for chicken tikka masala, which is always my go-to order, helps me satisfy the craving without packing up the the whole family to go out to dinner.

What spices are in Chicken Tikka Masala?

The thing that makes this recipe extra super easy (and extra super yummy): garam masala. It’s a spice mixture that you can buy or make yourself, consisting of all kinds of yummy aromatic spices like cardamom, cumin, coriander, and ginger.

When you already have the spices mixed, it’s easy to grab a tablespoon of it from the pantry to flavor this entire meal, along with cayenne pepper for some spice.

True, authentic Indian cooks often toast whole spices in a skillet before crushing it themselves using a mortar and pestle.

While this can introduce complex and delicious flavors you otherwise wouldn’t get, I’ll choose the pre-mixed, pre-ground garam masala almost every time just to make my life easier.

A happy compromise is achieved in this recipe by adding the spices to the onions and letting them toast for a while before adding the tomatoes helps bring out that extra level of toasty flavor.

Where did Chicken Tikka Masala originate?

Chicken Tikka Masala is actually a curry, consisting of Chicken Tikka (chicken marinated in yogurt and spices, then cooked in a tandoori grill), served with a creamy, tomato-based sauce over rice.

Actually, there’s some speculation that Chicken Tikka Masala originated in the UK, rather than India. Chicken Tikka is authentically Indian, but it’s thought that putting it in the creamy sauce was developed by Indian immigrants to the area to satisfy the desire of British people to have their meat served in gravy.

The sauce is often bright red or orange in color- this is achieved by adding spices like turmeric, or in some cases, food dyes.

This recipe isn’t as brightly colored as those I’ve seen in restaurants, kind of like this egg drop soup, but it’s still delicious.

How do you make Chicken Tikka Masala?

First, you’ll marinate the chicken in a simple mixture of Greek yogurt, garam masala, salt, and pepper. It’s good to let it sit for at least 20 minutes, but ideally let it sit overnight.

If you don’t have time to do this step or forget, fear not. It will still be delicious. You can even use leftover cooked chicken from another meal or a store-bought rotisserie, if you want to keep things really simple.

Then, brown the chicken in some butter. No need to fully cook it- you’re just trying to get it some color.

Remove the browned chicken and add some onions to the pot, along with some more butter. You want to soften the onion a lot, but avoid browning it.

I find the flavor a bit better if I let the onions sweat, rather than brown. It takes a little longer but I think it’s worth it.

Then, add ginger, garlic, spices, crushed tomatoes, and the chicken back into the pot. Simmer until the chicken is fully cooked, and stir in some heavy cream.

You can also use regular milk, or even coconut milk instead.

I like serving this over cumin-scented basmati rice. I add whole cumin seeds to basmati rice while it cooks- see recipe notes for more on how to do this.

After a quick garnish of fresh cilantro and some sliced fresh jalapeños (or not, whatever floats your boat), the chicken tikka masala is ready to eat. Don’t forget the naan to mop up the delicious sauce!

As a bonus, this recipe is a great thing to make in advance- it reheats beautifully for dinner later in the week or to take for meal prep lunches all week long.

And you can freeze it for up to 6 months in an airtight container!

If you like this recipe, you’ll love this Curried Chicken Salad with Apples and Raisins, this Oven-Broiled Tandoori Chicken (which you can use in this recipe, if you prefer), and this Red Lentil Dal with Poached Eggs and Cucumber Yogurt Sauce.

Here’s the printable recipe for this Easy Chicken Tikka Masala! 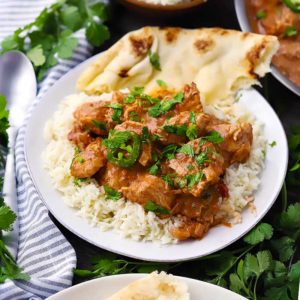 As an Amazon Associate I earn from qualifying purchases. DISCLAIMERS
926 shares
926 shares