This Panzanella (Italian Bread and Tomato) Salad makes great use of stale bread! Toasted to crispy perfection in a skillet with olive oil, the bread soaks up the delicious juices from the tomatoes and easy macerated onion vinaigrette.

Panzanella is an Italian (specifically, Tuscan) salad made of stale bread and juicy tomatoes, with plenty of extra-virgin olive oil. Leave it to the Italians to know how to make old, stale bread into something magical and delicious! I’ll NEVER be tossing old bread again.

This panzanella recipe also includes cucumbers, fresh basil, and capers. It’s tossed with a simple vinaigrette made with macerated red onions, to take their raw bite out. And it only takes about 10 minutes to whip up!

Read on to find out how to toast the bread to perfection in a skillet, how to macerate red onions for the vinaigrette to bring out their natural sweetness, and how to turn this salad into a complete meal by adding protein.

Toasting the bread for Panzanella

A couple of weeks ago, I was fortunate enough to dine at Erin French’s restaurant in Freedom Maine, The Lost Kitchen. More on that at another time.

While I was there, I picked up her cookbook. I borrowed her method of toasting the stale bread in a skillet with olive oil for this panzanella bread salad, rather than baking it in the oven. It’s faster, it doesn’t heat up your house, and it ensures crispy outsides but chewy and soft insides.

Simply heat up a couple of tablespoons of extra-virgin olive oil in a large, heavy skillet. I used cast iron, but any kind will do. Then, add pieces of torn (or cubed), stale bread, tossing it around a few times in order for it to absorb the oil and brown to golden perfection on all sides.

This is a great way to whip up some simple croutons, too!

You can also skip making the croutons and just use leftover crunchy crostini (like the ones from this strawberry bruschetta with homemade crostini recipe).

Making the vinaigrette with macerated onions

Another tip I took from Erin French’s cookbook was to make a vinaigrette with macerated onions. She uses shallots to make a shallot vinaigrette; I took the same concept and applied it to sliced red onions for this panzanella salad.

Macerating the onions is as simple as letting them soak in vinegar and salt for a few minutes or up to 24 hours. The vinegar draws out the natural sugars in the onions, softening them and taking out that raw onion flavor. It’s the perfect way to prepare the onions to be part of the salad, while at the same time infusing their flavor into the vinaigrette.

(You could also use pickled red onions for this recipe, if you like.)

Just add some red wine vinegar (or rice vinegar) to some sliced red onions along with some kosher salt. Let it sit while you prepare the rest of your ingredients (like peeling, seeding, and slicing the cucumbers) and toast your bread, stirring them around occasionally.

Then, just before mixing the panzanella salad together, stir some extra-virgin olive oil into the onion mixture. You’re going to love how simple and easy this vinaigrette is, and how much it enhances the flavors!

How to make Panzanella Salad

Once you have the bread toasted and the vinaigrette mixed, making panzanella is as simple as tossing everything together in a big bowl.

Tomatoes are the other star of this recipe: I recommend using super juicy ones. I used cherry tomatoes from my garden, but this is a great opportunity to use any tomatoes that are almost too ripe for any other use.

Toss the tomatoes, along with seeded and sliced cucumber (peeled, if you prefer- I like “half peeled” so some color remains) and some drained and rinsed capers (optional) in a large bowl with the toasted bread and the vinaigrette. And don’t forget the fresh basil- here’s a tutorial on how to cut it into a perfect chiffonade.

Then, season to taste with more salt and pepper. THAT’S IT! Told you it was easy.

It’s best served within 20 minutes or so. Any longer than that and the bread will become soggy. See recipe notes below for how to prep this in advance.

Make it a meal

This panzanella is a great side dish to almost anything, such as pan-fried sea bass, grilled chicken skewers, or steak.

But if you want to keep things really simple, I recommend adding some protein directly to the salad to make it into a complete meal, such as:

And feel free to experiment! This salad is great with other added veggies too, such as baby arugula or spinach, bell peppers, zucchini, summer squash, etc. As long as you have bread and tomatoes and the yummy vinaigrette, you’re good to go.

And if you have any extra tomatoes, this roasted red pepper and tomato soup is a great way to use them up!

What kind of bread to use

I recommend a good, crusty artisan loaf for this. Here’s my favorite recipe for no knead Dutch oven crusty bread.

Did you make this Panzanella Salad Recipe? Please comment below and Rate this Recipe! 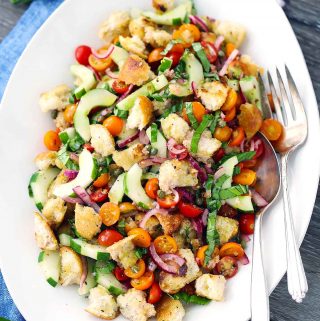 This Panzanella Recipe, or Italian Bread Salad, is such a great way to use up leftover bread, which soaks up the juices from the tomatoes and simple vinaigrette.
5 from 2 votes
Print Pin Rate
Course: Salad, Side
Cuisine: Italian
Prep Time: 10 minutes
Total Time: 10 minutes
Servings: 4 servings
Calories: 301kcal
Author: Elizabeth Lindemann


Tried this recipe?Mention @BowlofDelicious or tag #BowlofDelicious!
« Easy Mexican Lasagna
Pasta e Fagioli (Italian Pasta and Beans) »
Did you make this recipe? I'd love to hear how it went! Comment and rate it below :-)