Jump to Recipe - Print
5 from 7 votes

Holy Moly. This pie is delicious and DECADENT. In true southern style, it’s certainly not for the faint of heart (meaning, if you’re looking for a heart-healthy dish, this is decidedly not it). I usually cook much lighter, healthier fare, but I’m on vacation so I figured why the heck not. As always: everything in moderation :-) 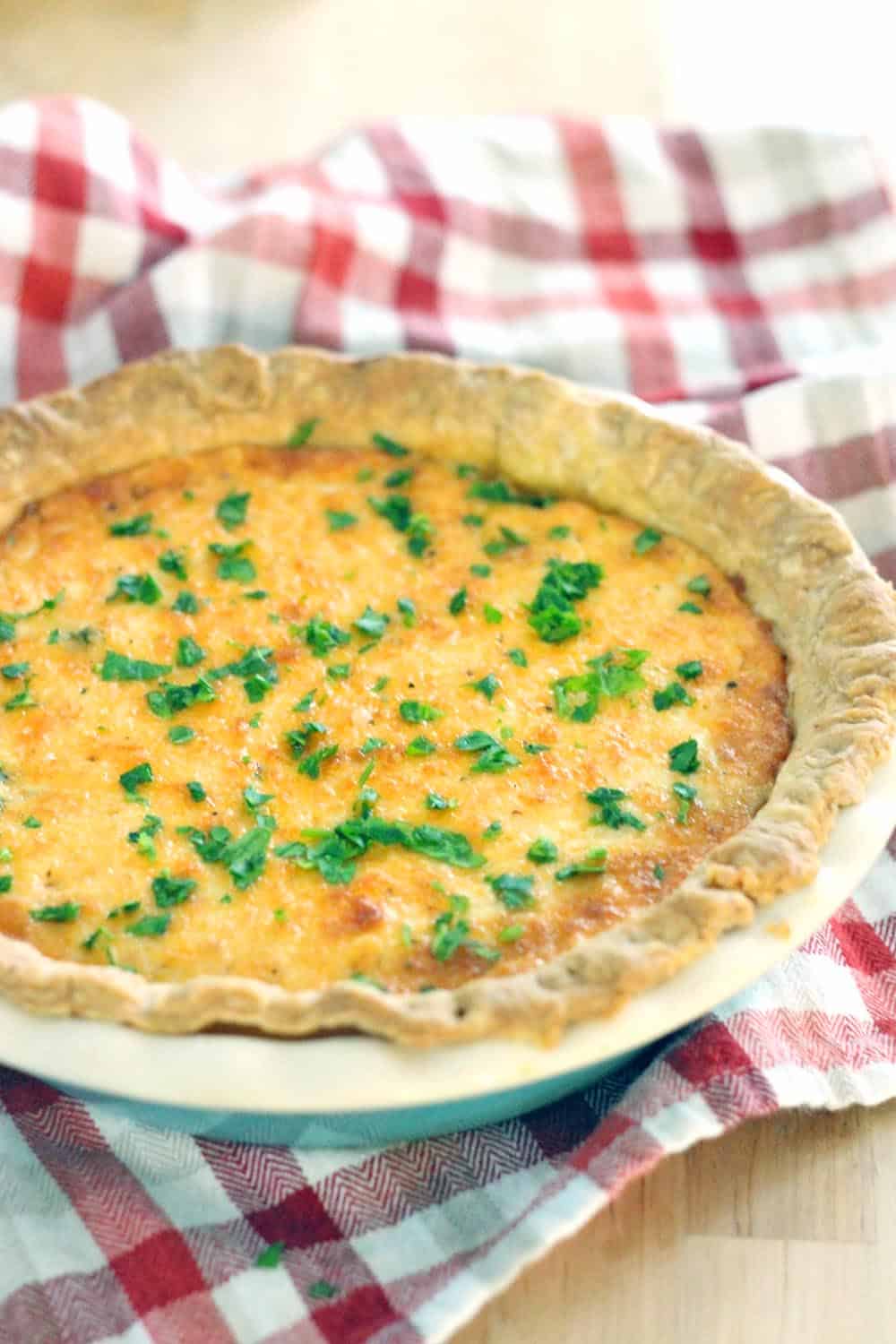 And despite the fact that it’s topped with a delicious concoction of spicy mayonnaise and mozzarella that melts into every delicious bite of the pie (if you’ve never had tomato pie before and you think this is weird, it works. Trust me.), it’s made from scratch, and it has good for you spinach and tomatoes, and it’s vegetarian…so it can’t be that bad for you, right? And if you have a small slice (or make mini tomato pies) with a side salad, you’ll be in good shape. Promise.

Now. Onto this deliciousness.

Tomato pie is very, very easy to make, especially if you have a pre-made crust. If you want to make your own, I used this recipe for traditional pie crust, but you can use a whole wheat, vegan, or gluten-free recipe if you want! Any crust will do.

The filling for this pie is a mixture of spinach, onions, and tomatoes, with a little salt, pepper, and crushed red pepper to spice things up a bit. The most important part of making the filling: you want there to be as little liquid as possible to it (so it doesn’t make the pie soggy).

Here’s what I did.

First, chop up the tomatoes and place in a colander sprinkled with a bit of salt, and allow to sit in your sink while you prepare the other ingredients. The salt will help draw the liquid out of the tomatoes.

While the tomatoes are a-sittin’, saute the onion in a skillet, add the spinach, and allow to wilt. Once the spinach wilts, some of the water from it will have distributed itself in the skillet; keep sauteing until most of the liquid has evaporated, and season with salt, pepper, and crushed red pepper.

Give the tomatoes a little pat with a clean paper towel, add them to the spinach, and viola! Your filling.

Just place the filling in a blind-baked crust (half-bake the crust with pie weights or beans for about 15 minutes, or until just beginning to brown and solidify) and top with a mixture of mayo, hot sauce, salt + pepper, and mozzarella cheese. Bake, and you’re done! 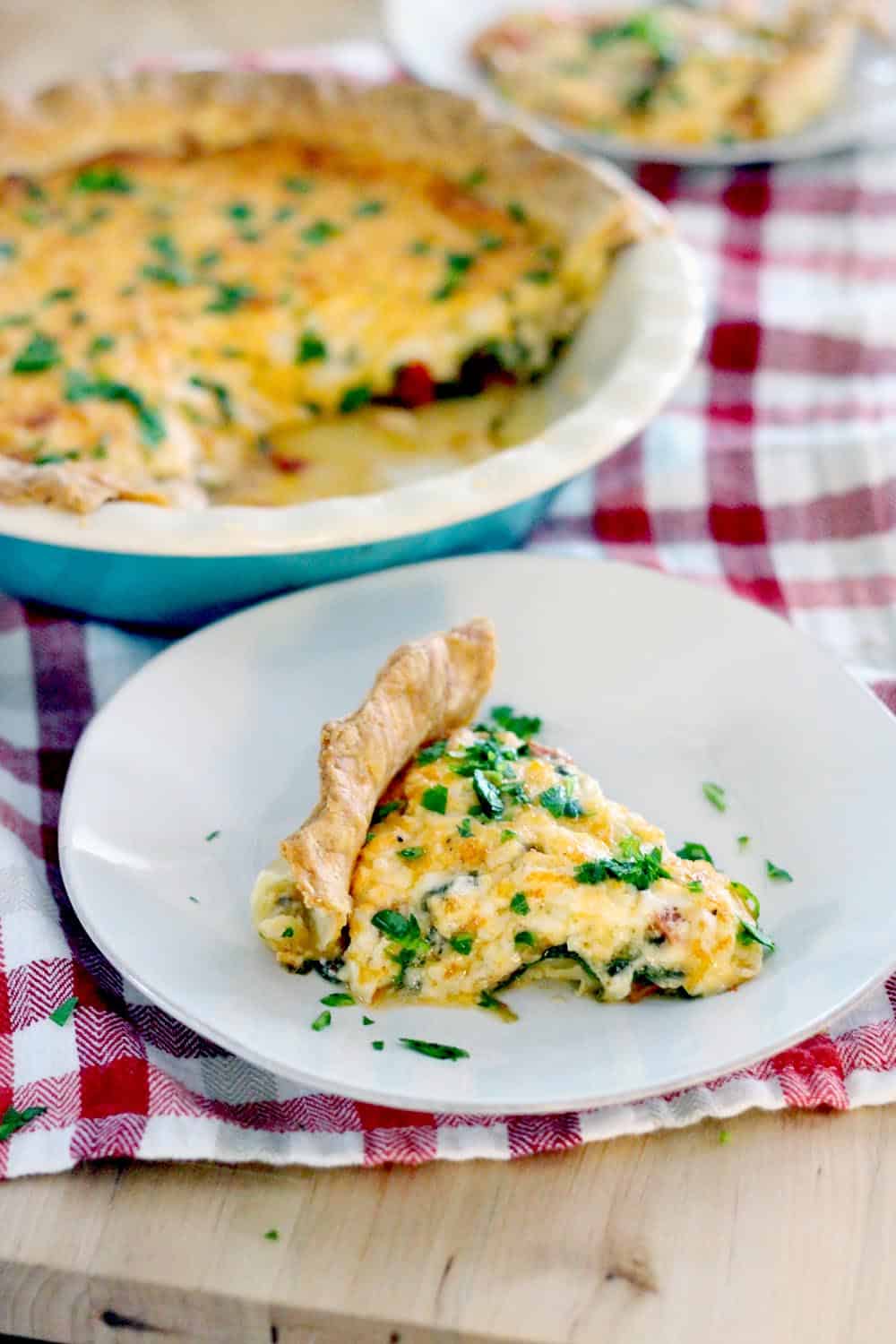 Here’s the best part about tomato pie: it can be served hot, room temperature, OR cold! It’s a great dish to make for a party or for a brunch, since you can make it ahead of time, or at least make the different parts of it ahead of time. I made this particular tomato pie at my friend Liz’s house (blogger from A Mothership Down), and I pre-baked the crust, pre-cooked the filling, and pre-mixed the mayo topping. All I had to do when I got there was assemble and bake! Super easy.

You may even say it was easy as…. PIE! Har har har har.

I guarantee this recipe is better than my jokes :-) Enjoy! 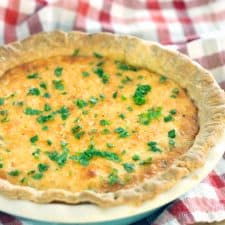 As an Amazon Associate I earn from qualifying purchases. DISCLAIMERS
316 shares
316 shares