These veggie burgers are EVERYTHING. They are hearty, full of flavor, and the texture is phenomenal. They hold together well- they aren’t mushy and they don’t crumble apart. They are amazingly healthy and packed full of veggies, whole grains, legumes, and seeds.

AND you can make them in bulk and freeze them for later. AND they are wicked easy to make, especially if you follow the tips below! 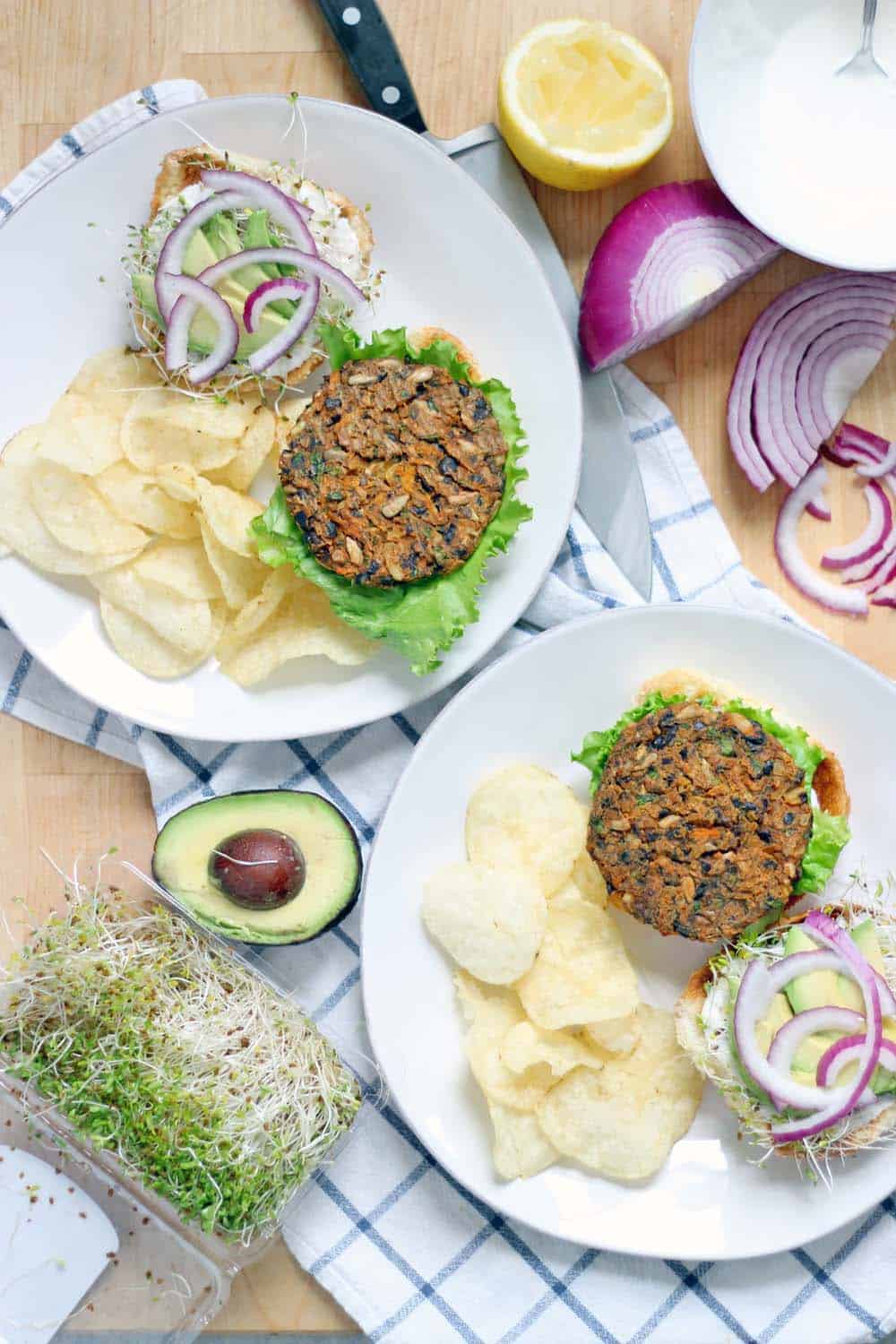 When I got the new cookbook from the well-known vegan cooking blog Oh She Glows, I was so excited to read it. Is there ANYTHING more exciting in the world than getting a brand new cookbook in the mail?!?! (answer: probably, actually… if you aren’t a food blogger) And yes, I do read my cookbooks- cover to cover- to try to figure out what to make first. When I found the recipe for her veggie burgers, I knew it was the one. I had found my veggie burger soul mate.

. Hers are 100% vegan, mine are not (since I am not a vegan, OR a vegetarian ), and I made a few other changes based on the ingredients that I had in my pantry. AND, I figured out a few tricks that will make these burgers extra great.

You may find it odd that a non-vegan would purchase a vegan cookbook, but let me explain. I believe in all things in moderation, and I believe that plants are one of the healthiest things you can eat. So eating vegan meals or mostly vegan meals frequently (with a real cheeseburger thrown in every once in a while) has been my way of eating mostly plants for a while now. And having cookbooks like this helps give me so many ideas for how to adapt many of the meals I already make to be more plant-based! 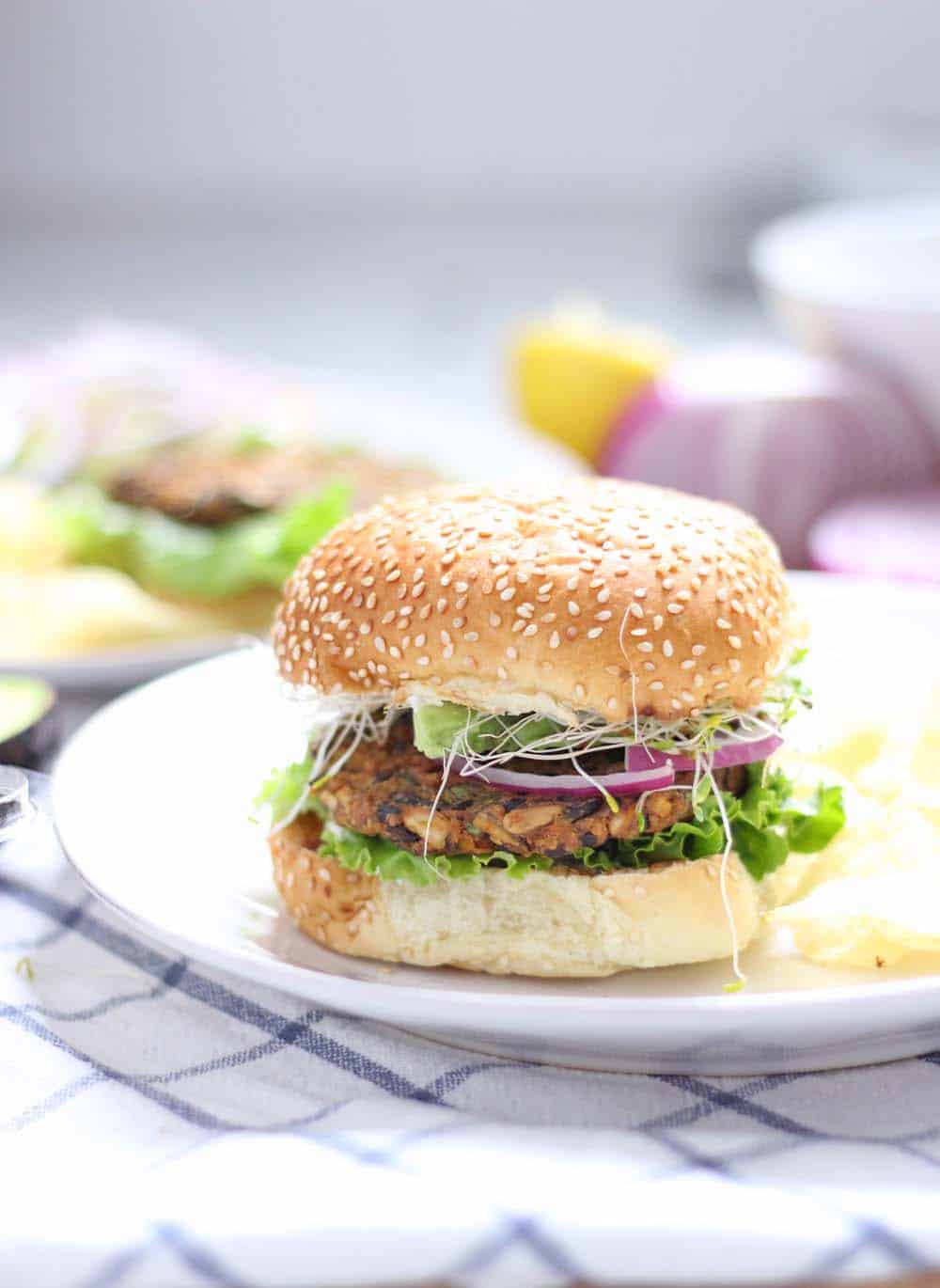 So. Here’s how to make these super healthy, super tasty veggie burgers.

First, mix together lots of things in a bowl. Cooked black beans and grated raw sweet potato are the base of these burgers, both extremely healthy and packed full of nutrients. Cilantro, garlic, olive oil, and onion add a savory, bright flavor to them, and some toasted sunflower seeds add amazing texture (you can also not toast the sunflower seeds, but it couldn’t be easier to do: simply add some seeds to a nonstick skillet

and toast over medium-high heat until fragrant and beginning to turn golden, flipping occasionally). A combination of salt and pepper, chili powder, oregano, cumin, and cayenne pepper add spice and heat (but not too much heat), and soy sauce gives it a savory umami to round off the flavors. YUM.

The remaining two ingredients are essential for a veggie burger that is firm enough to form into patties and will hold together in the oven. First: eggs. Add a couple of eggs to the batter and when the patties cook, the eggs will also cook and help bind the mixture together. (For a vegan version, use flax or chia egg substitutes.) Second: oats. Oats (or bread crumbs, like in my wild rice and black bean veggie burgers) help absorb some of the moisture of the vegetables and eggs and make the patties easier to form (plus, they add whole grain goodness to the patties!).

While this may seem like a lot of ingredients, fear not: many of the items you likely already have in your pantry, and since everything is mixed together in one bowl, it’s actually extremely simple and easy to make! All you have to do now is form the patties and bake them.

I made a couple of discoveries while making these burgers that I would like to share with you- these tricks can be used for any veggie burger you make.

First, refrigerate the batter for a few hours before forming patties. I did this by accident: I wanted to save time on a weeknight so I mixed the batter over the weekend, so all I had to do was form the patties and bake later on. Not only did this help me save time after a busy work day, but it gave the oats time to absorb much of the liquid in the batter. This, and the fact that the batter was cold, made forming the patties infinitely easier than just after mixing. While the patties can absolutely be formed immediately if you need the burgers that same day, I recommend trying to make the batter in advance and leaving it in your refrigerator anywhere from a few hours to a few days before assembling and baking!

Second, divide the batter into eight equal parts using a knife. Smooth out the batter in the bowl and when you are ready to form your patties, use a knife to cut it like you would a cake. The result is eight *almost* perfectly equal sections that will ensure your veggie burgers are equally sized and portioned (which is helpful if you are a bit OCD like me, or so that there is no fighting for the largest one). Like a bigger burger? Divide into six portions instead of eight. 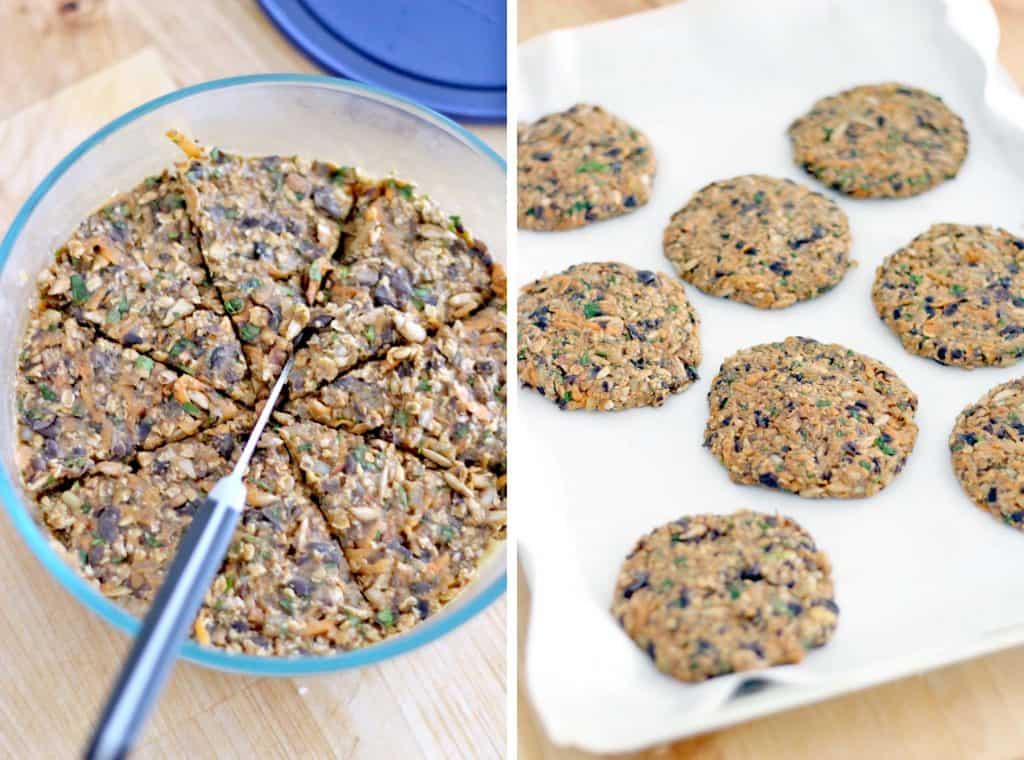 When you are ready to bake them, place the patties on a parchment covered baking sheet and bake at 350 degrees for thirty minutes, flipping halfway through.

Serve on toasted buns with toppings such as lettuce, tomatoes, red onions, sprouts, cucumbers, and avocado. I whipped together a quick batch of lemon-garlic mayo, but you can use whatever delicious spreads or condiments you want!

Well, I’m off to commence about eight hours of packing for my move (only nine more days!). Wish me luck! Recipe below- Enjoy :-)

Really into black beans? Try these Quick and Easy Black Beans and Rice. 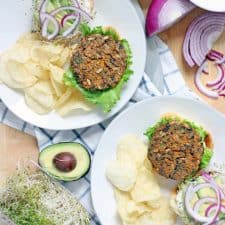 These veggie burgers are full of flavor and amazingly healthy. They have a great texture and they hold up well when you bake them without being dry or mushy! And they are SO easy to make!
4 from 1 vote
Print Pin Rate
Course: Veggie Burger
Cuisine: American
Prep Time: 20 minutes
Cook Time: 30 minutes
Optional refrigeration time: 4 hours
Total Time: 50 minutes
Servings: 8 burgers
Calories: 192kcal
Author: Elizabeth Lindemann

As an Amazon Associate I earn from qualifying purchases. DISCLAIMERS
168 shares
168 shares