This BBQ Chicken Pizza is one of those life-changing recipes that I know I’ll make again and again. And again some more. Inspired by the well-known California Pizza Kitchen recipe, but about a thousand times healthier because it’s homemade (and in my opinion, even more delicious), this will be sure to become a new favorite of yours, too!

Zach and I just sat here and ate this for dinner with no real conversation except for the occasional “oh my GOD this is good!” and “this is the best pizza in the WORLD!” Our brains literally could not register anything except for the deliciousness of this pizza.

Side note: I’m so happy I married someone who loves food as much as I do :-)

The best part about this recipe is that it uses leftover cooked chicken (any will do) and naan for the pizza crust, making it extremely quick and easy to prep (with very few dishes dirtied). And since apparently moving across the country requires, you know, lots of packing and planning, I can use all the time I can get! Quick and easy meals are my best friend lately.

Oscar is my other best friend, and he has been “helping” me pack every day by immediately placing himself inside all of the boxes (don’t let that innocent look fool you!).

First things first. Naan pizza is my favorite way to make pizza in a hurry. I love a good homemade pizza dough as well, but this is a great alternative- no rising, kneading, or rolling required! And since making my last naan pizza recipe (buffalo mushroom– also delicious), I’ve made a very important discovery to keeping the crust extra crispy and not soggy.

First, bake only the naan bread- no toppings yet- in the oven at a high temperature for 5-7 minutes or until it’s just starting to get crispy. This will help firm up the bread so it stands up to the sauce and toppings you are about to add. I use my half baker’s sheet

with an oven safe rack

nestled inside it to cook my naan pizza, but you can also put it directly on the rack in the oven (this enables hot air to circulate above and below the crust, making it crispier).

Once you’ve baked the naan for a while, remove it from the oven and add the toppings. First, a layer of barbecue sauce (any kind will do- I used the precious remaining Salt Lick BBQ sauce I had leftover from our last trip to Austin- only two weeks until I can get that liquid gold anytime I want to!).

Then, some mozzarella cheese, followed by cooked chicken mixed with more BBQ sauce, and sliced red onions. Back into the oven for 10 more minutes, with a sprinkle of fresh chopped cilantro for the final touch.

CPK’s pizza uses smoked gouda instead of mozzarella- you can use whichever you want. I prefer the simplicity of mozzarella because it doesn’t compete with the other delicious toppings. And if you’re feeling adventurous, here’s how to make your own whole wheat naan bread and homemade BBQ sauce!

Taking photographs of this and not eating it right away was one of the hardest things I’ve ever done. Oh, the struggles of being a food blogger.

Next time you want to grab a frozen California Pizza Kitchen BBQ chicken pizza, try this instead. It’s so much healthier, so much tastier, and almost just as easy as popping a frozen pizza in the oven! 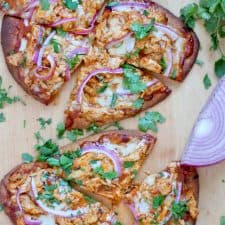 As an Amazon Associate I earn from qualifying purchases. DISCLAIMERS
16.8K shares
16844 shares