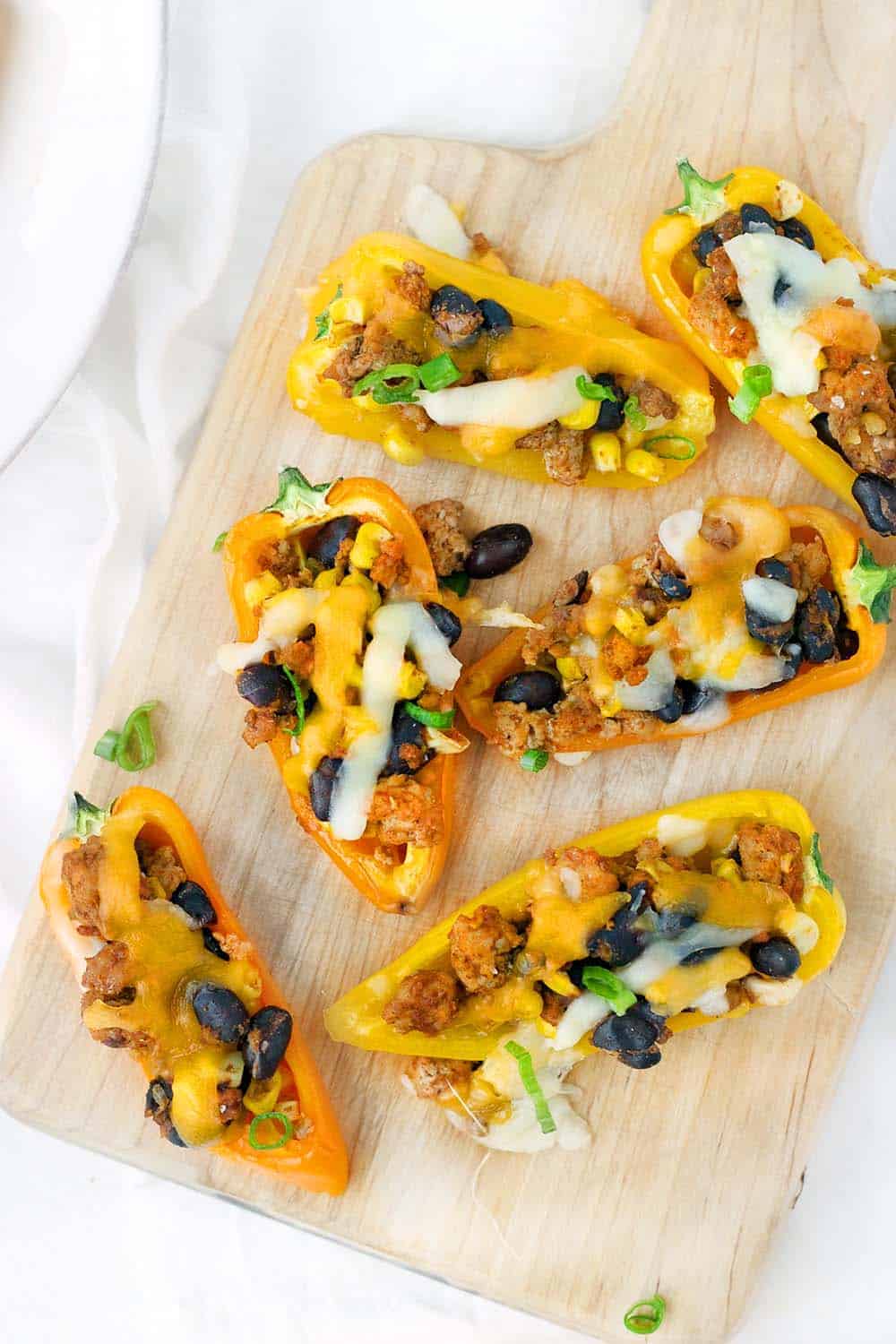 The mini sweet bell peppers have such a great sweet flavor that pairs really well with the mild spice of the taco seasoning, and the ingredients are super light and healthy. These tasted amazing, were filling but didn’t weigh us down, and also super fun to eat.

This is a great low-carb alternative to tacos in tortillas. You can make it even lower carb by replacing the beans with more meat, and omitting the corn (or replacing it with another vegetable like zucchini or tomatoes). You can also use ground beef instead of turkey, or even crumbled veggie burgers for a vegetarian version.

I also love that they are perfect for an appetizer or as a meal on their own. These mini stuffed peppers are super flexible, which is one of the best parts about them. 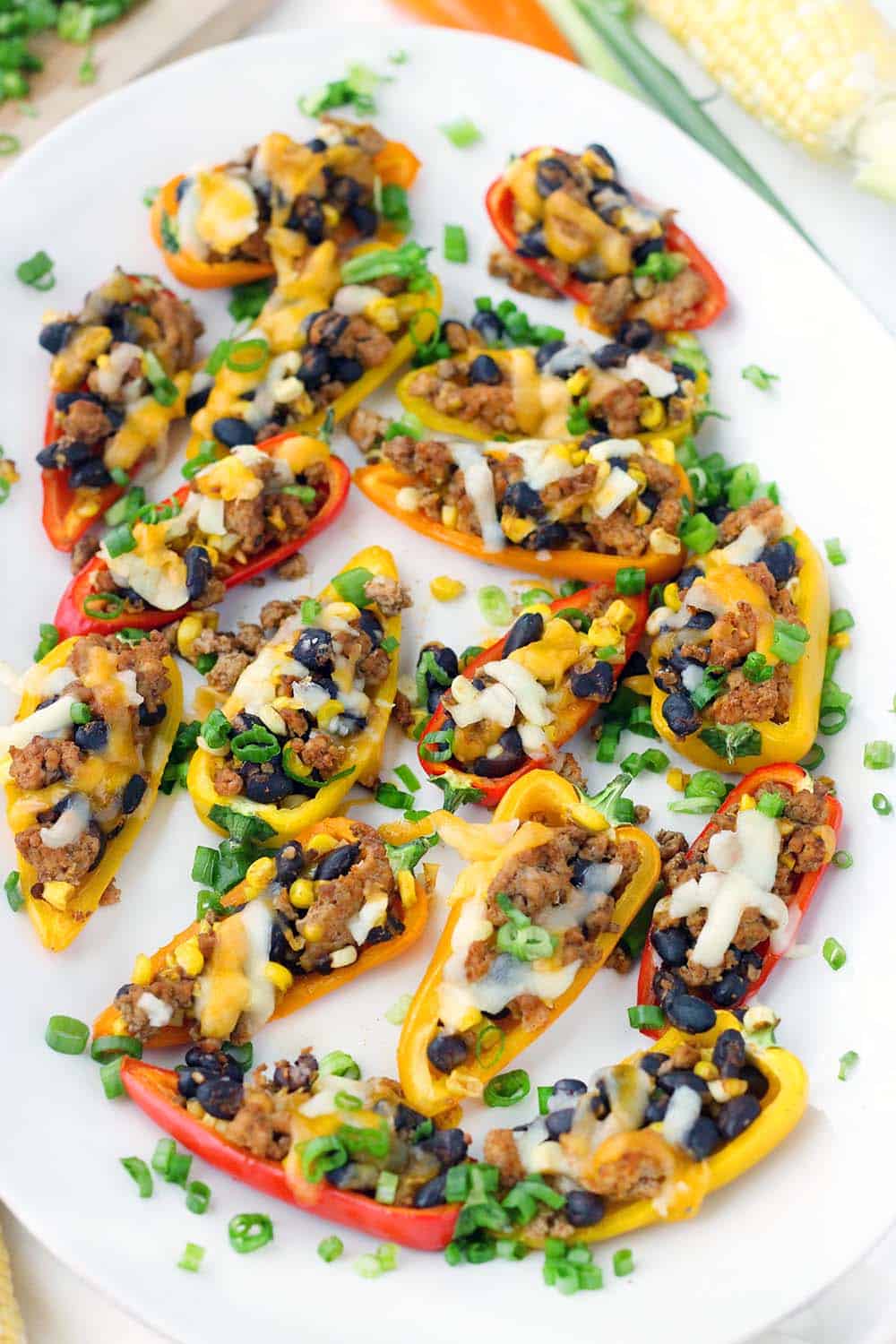 In order to fill 16 peppers (32 halves), you don’t need very much filling, since they are so tiny. In fact, only 1/2 lb. of ground turkey, 1 cup of cooked black beans, and 1/2 cup of corn is enough (making this recipe super budget friendly as well!).

But since ground turkey comes in 1 lb. packages, and a whole can of black beans is usually 1.5-2 cups, I went ahead and doubled the ingredients needed for the filling. I had extra, which I used to fill tortillas with cheese for easy tacos, and served with eggs for breakfast, throughout the week. It was perfect for my toddler!

The filling is seasoned with regular old taco seasoning. I used a homemade taco seasoning recipe, but you can use store-bought if you prefer. 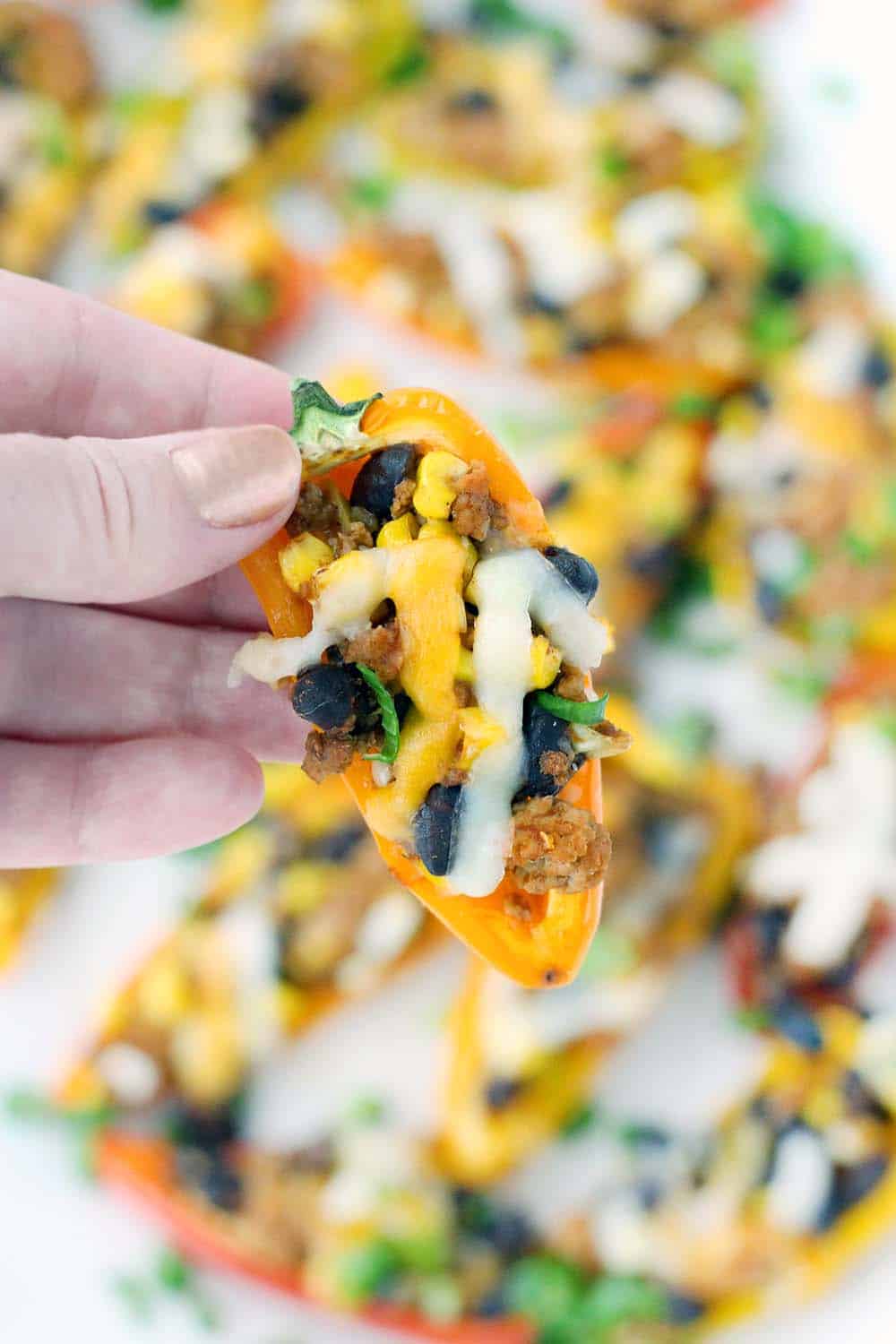 Just brown the turkey in a little bit of oil in a large skillet (I used canola for its neutral taste, but you can use olive if you want). Then, add the taco seasoning, black beans, and corn. Add a little water to thicken it up and make it saucy.

Meanwhile, cut the peppers in half and take out the seeds and ribs. I left the stems intact, which helped the structural stability of the peppers.

When you fill the peppers, it is a little bit challenging, since they are so small. I used a small spoon to scoop the filling into each one and pressed down in order to fit as much as possible. Some will spill out- that’s OK. I lined my baking sheet with parchment paper so clean up would be super easy. 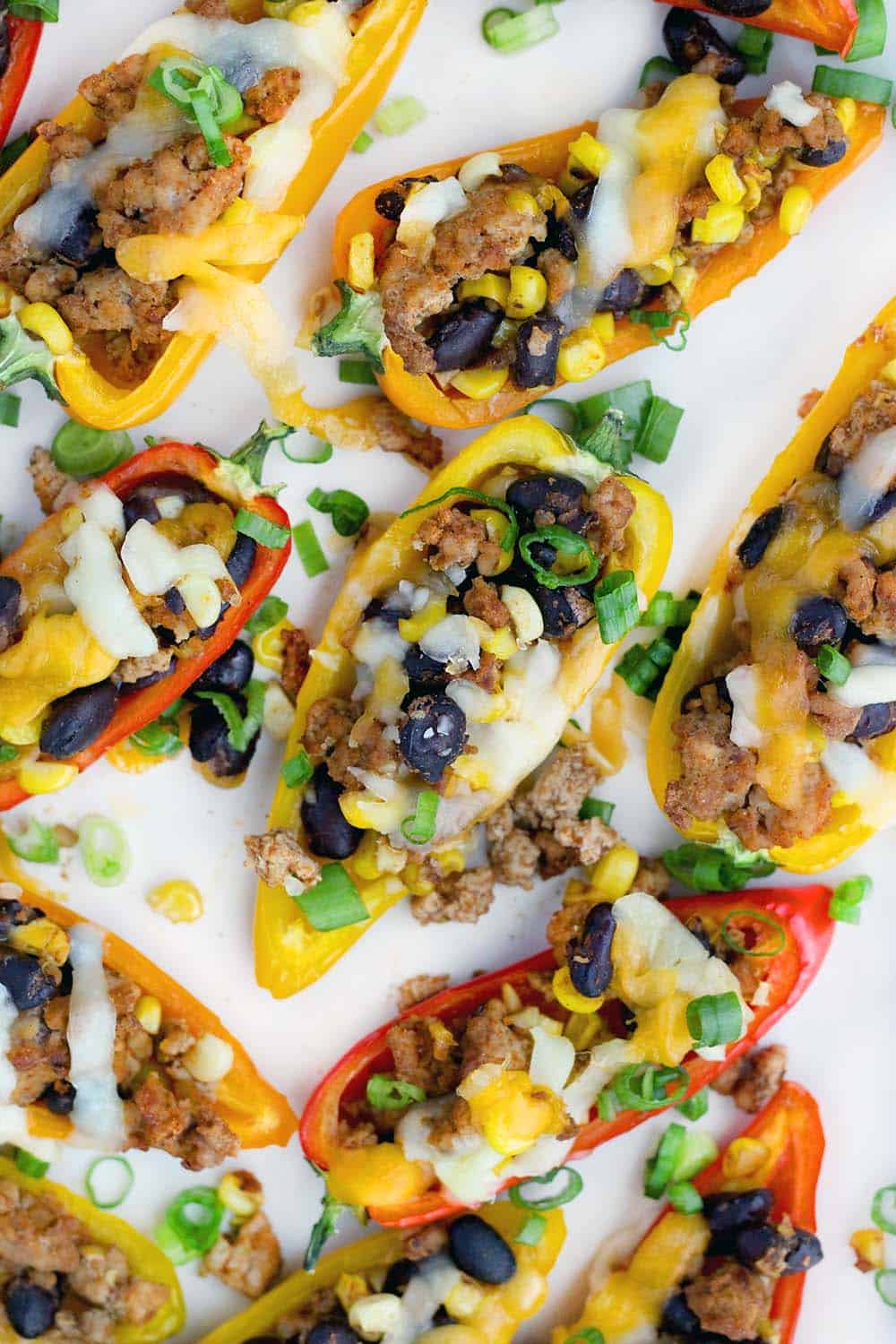 I baked the peppers for 15 minutes at 350 degrees, THEN added the cheese and baked for 5 more minutes. This caused the cheese to get melty but not too browned and crispy. I used a thick cut pre-shredded Mexican cheese blend, but next time I’ll use thinner shredded cheese in order to cover more surface area. 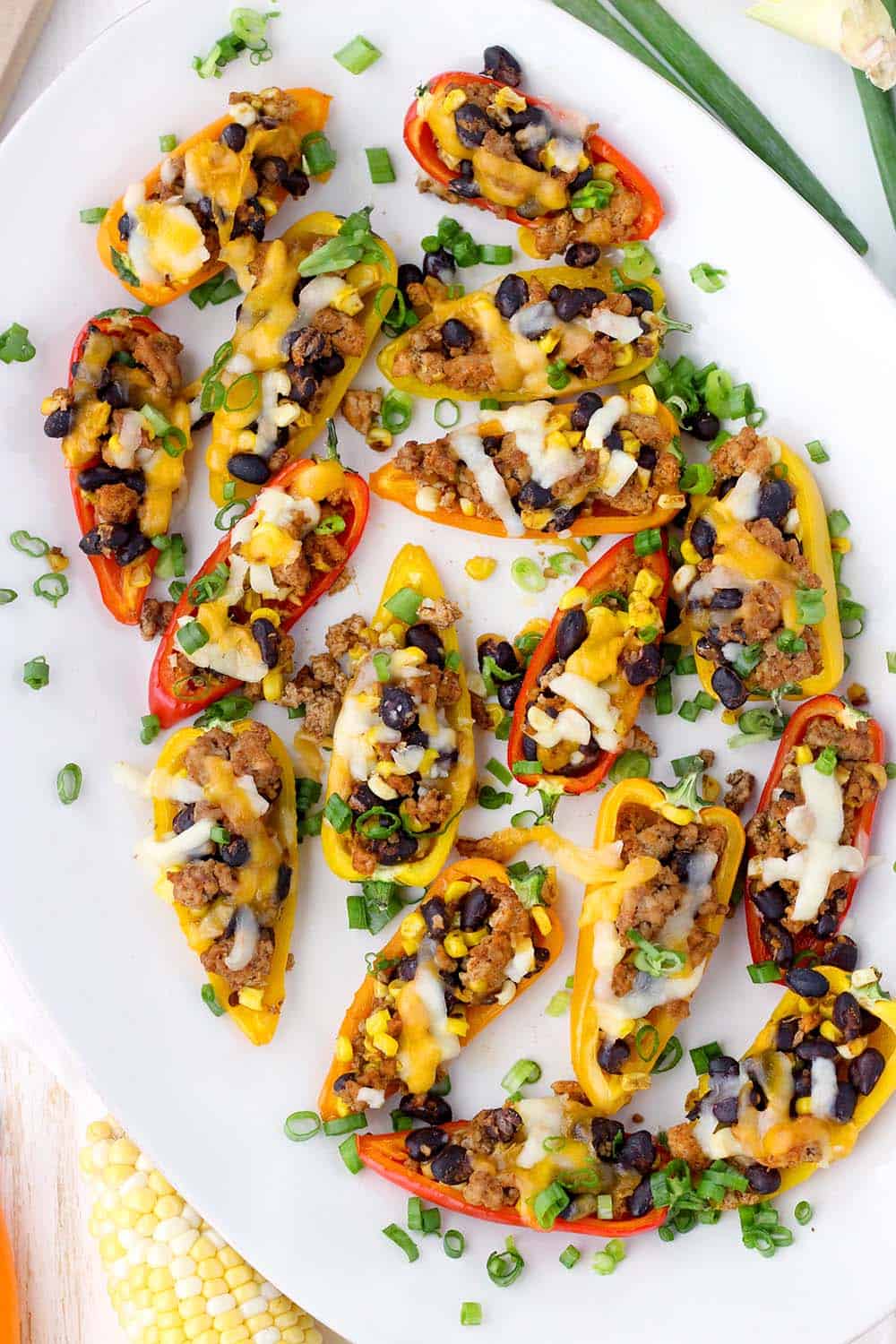 I finished these taco stuffed mini peppers off with some thinly sliced green onions. I usually do cilantro on top of almost all Mexican or Tex-Mex recipes, but since I didn’t cook the filling with any onions, I added them on top instead. Delicious!

One more thing- you can easily assemble these stuffed peppers in advance (minus the cheese) and refrigerate for up to two days before baking.

If you like this recipe, you’ll love this Veggie-Packed Southwestern Meatloaf and this Crockpot Turkey and Vegetable Chili! 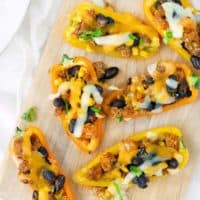 
Tried this recipe?Mention @BowlofDelicious or tag #BowlofDelicious!
« Watermelon Salad with Queso Fresco, Lime, and Cilantro
Mexican Baked Beans with Chorizo »
Did you make this recipe? I'd love to hear how it went! Comment and rate it below :-)