There’s nothing like a cold salad on a hot summer’s day. This Barley and Lentil Salad is hearty and filling, but refreshing and healthy. It’s tangy from a fresh dill vinaigrette, and SO inexpensive to make. It’s the perfect vegan side dish or light meal.

Barley is one of my favorite grains. It’s nutty, chewy, hearty, and it holds its shape without turning mushy. I like using it as an alternative to rice, such as with these Spinach and Barley Arancini and this Barley Risotto with Asparagus, Basil, and Lemon.

Read more about the health benefits and the different types of barley here.

You can use either hulled or pearl barley for this recipe, but if you want more of a nutritional punch, go with hulled. But don’t worry- I have a trick for cooking it just as quickly as pearl barley!

Simple soak the hulled barley in water overnight before cooking as you would dried beans. It will cut the cooking time in half.

At this point, the barley will take about 30 minutes to cook, while the lentils take about 20. In order to avoid getting two pots dirty, just simmer the barley for 10 minutes and then add lentils into the same pot. 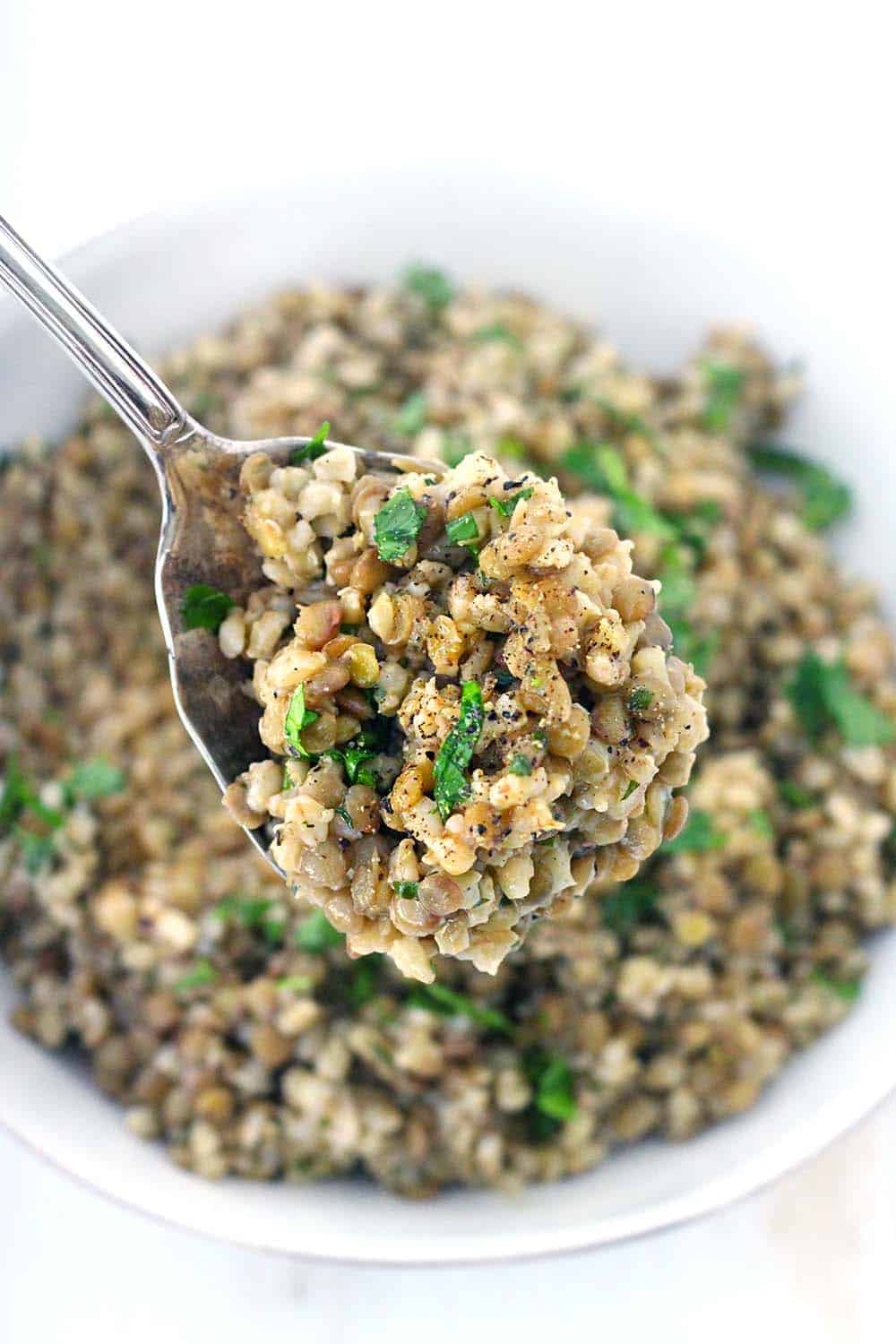 After the barley and lentils are fully cooked, simply drain them from the cooking liquid, mix them with an easy, tangy fresh dill vinaigrette, and allow the salad to cool in the refrigerator. There is more than enough dressing for the grains and lentils to soak up tons of flavor while they are hot without drying them out.

We had this on the side of lamb shanks- fresh from the farmer’s market- for dinner (we were feeling fancy). This barley and lentil salad a great dish to take to a potluck or picnic since you can make it in advance and serve it cold.

It’s also great to pack with veggies and/or another protein for refreshing, healthy summertime work lunches all week long.

Given its Mediterranean flair, I’d love to make this again with sliced Greek-seasoned chicken breasts, feta cheese, and cucumbers mixed in.

If you like this recipe, you’ll love this Egyptian Barley Salad and this Greek Lentil Soup recipe! 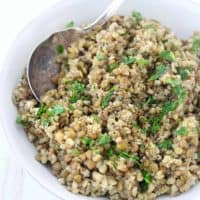 Refreshing, hearty, and healthy, this Barley and Lentil Salad is the perfect vegan side dish or light meal. It's dressed with a delicious and tangy fresh dill vinaigrette, and it's SO inexpensive and easy to make!
5 from 3 votes
Save this Recipe Saved! Print Pin Rate
Course: Side
Cuisine: American
Prep Time: 10 minutes
Cook Time: 30 minutes
Total Time: 40 minutes
Servings: 8 servings
Calories: 190kcal
Author: Elizabeth Lindemann


Tried this recipe?Mention @BowlofDelicious or tag #BowlofDelicious!
« Sautéed Green Beans with Bleu Cheese and Walnuts
Make Ahead Breakfast Pie with Lattice Bacon Crust »
Did you make this recipe? I'd love to hear how it went! Comment and rate it below :-)