Home » All Recipes » Skillet Potato Salad with Bacon and Arugula

Thank you so much to the Idaho Potato Commission for sponsoring this post! As always, all opinions and endorsements are my own.

I’ve discovered my new FAVORITE way to make potato salad! This Skillet Potato Salad with Bacon and Arugula is served warm with a sweet and tangy vinegar-based dressing. It’s similar to German potato salad, Paleo and gluten-free, and the perfect side dish all year round. And like most of my favorite foods tend to be, it’s made extra delicious from cooking in a cast-iron skillet. 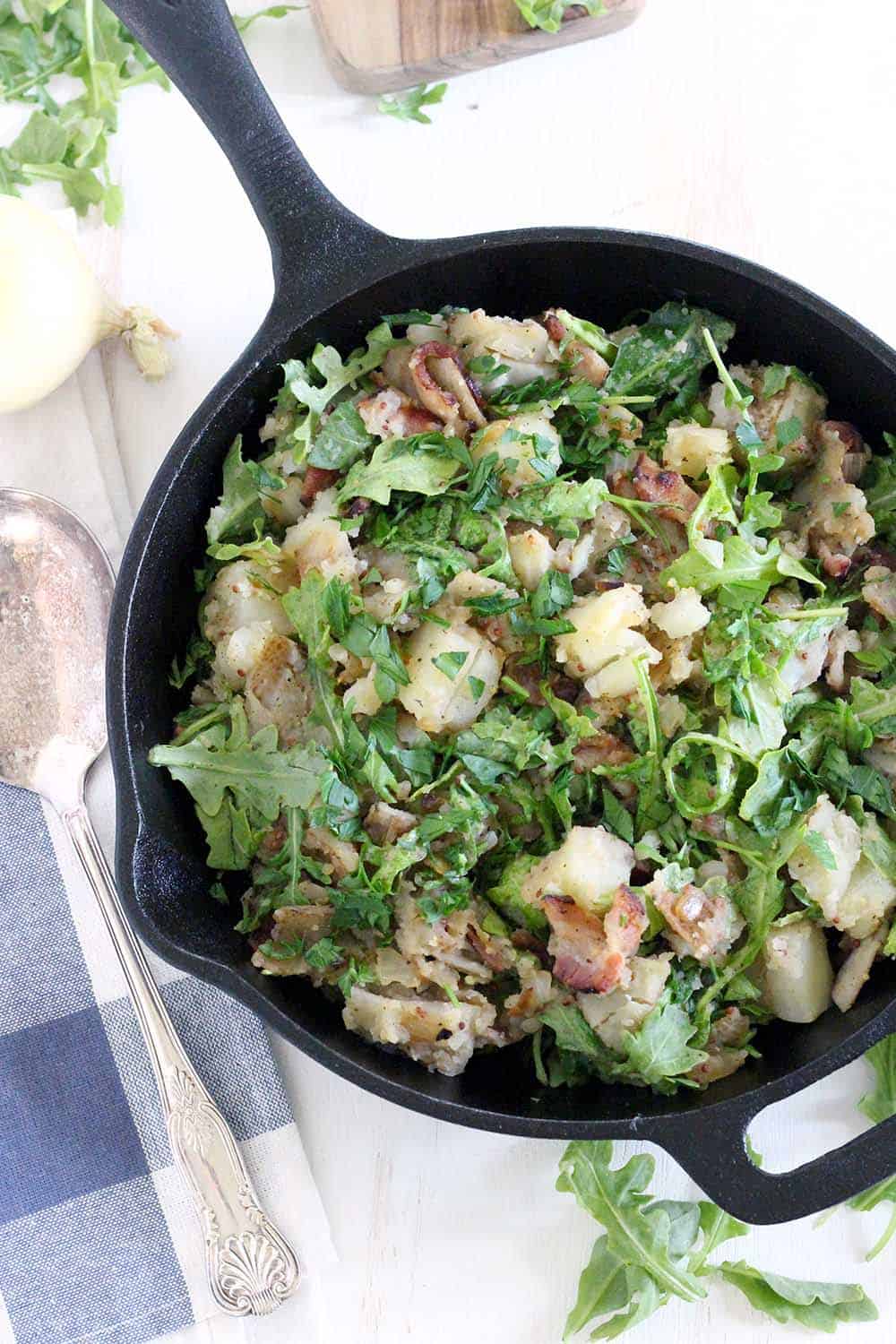 I’ve been in a bit of a creative slump this week, which is difficult when your job depends on being creative. Coming up with a recipe for the blog was HARD, especially because I didn’t plan ahead like I usually do. I had a serious case of the “don’t wannas.” I spent about a half an hour putzing around my kitchen, staring blankly into my fridge and pantry, looking for inspiration.

In my fridge was a half a carton of baby arugula that if I didn’t use quickly, would go bad. I had two russet potatoes in my pantry that were threatening to sprout at any moment. And I had an open package of uncured thick-cut hickory smoked bacon that I wasn’t about to let go to waste. No, I told myself. NOT THE BACON! 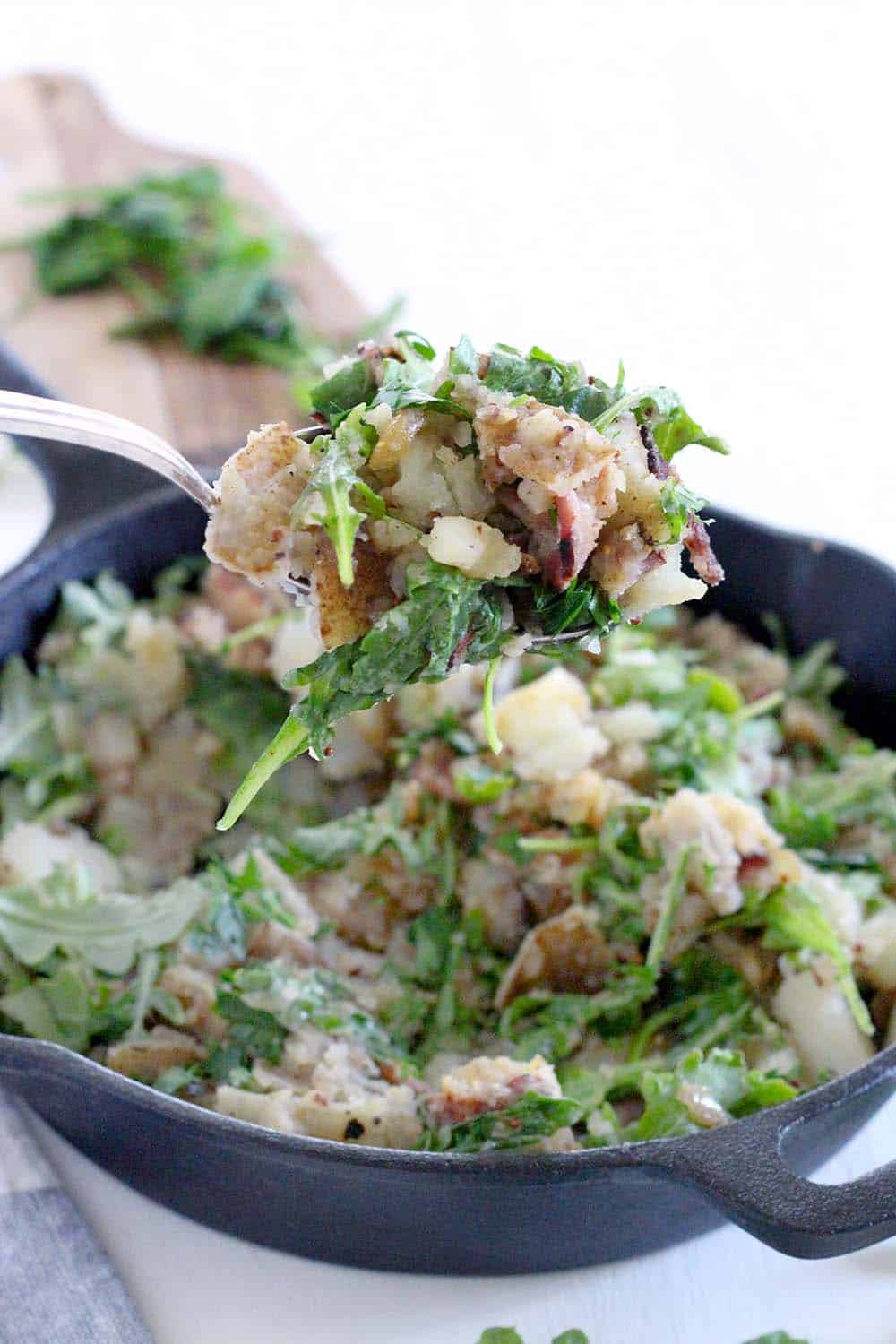 So I did what any responsible bacon and argula and potato lover would do: I used all three to make this recipe. It was like an episode of Chopped (but with normal ingredients).

That’s what I love about cooking and creating recipes. It’s often a creative challenge and so many times, accidental recipes make some of my favorites. I’m DEFINITELY making this potato salad again and again and again.

And I’m also DEFINITELY eating the leftovers right now as I type this. I couldn’t resist. Om nom nom… 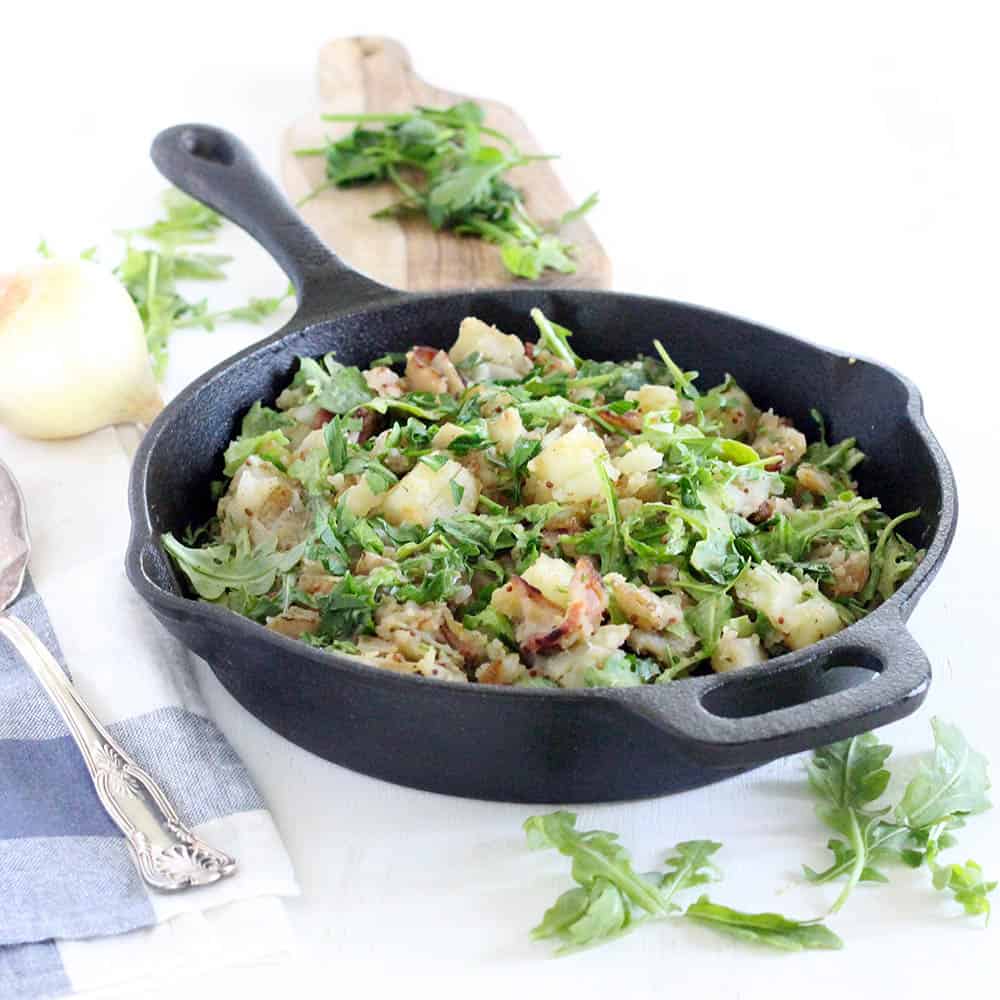 You can use another kind of potato for this recipe, but I loved the texture of russets in this. I left the skin on, which provided some structure. The flesh got partially mashed up, which helped thicken the dressing and distribute it equally throughout the salad. I recommend leaving the skin on no matter which potato you choose, both for texture and for added nutrition.

If you don’t have a cast-iron skillet, no worries: you can definitely make it in any other, preferably heavy, skillet. BUT, also, you should probably get one. Right now. It’s my favorite piece of cooking equipment. It cooks food evenly because it retains heat throughout the entire surface. The more you use it, the more flavor will develop from the layers of seasoning, especially from recipes like this that use bacon. It’s cheap. It will last forever. Go ahead, treat yo’ self.

If you are a potato salad lover, make sure to try this Nepalese Potato Salad and this Cold Potato Salad with Buttermilk Dill Dressing!

Here’s the printable recipe for Skillet Potato Salad with Bacon and Arugula. 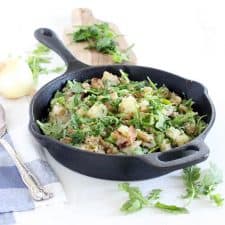 As an Amazon Associate I earn from qualifying purchases. DISCLAIMERS
653 shares
653 shares