Homemade Turkey Gravy made from the drippings of roast turkey is an absolute MUST at my Thanksgiving table. It’s easy to whip up a batch of classic turkey gravy in only 15 minutes, and it tastes SO much better than store-bought!

I like to think of all the parts of the Thanksgiving meal as vehicles with which to eat gravy. I smother my turkey, mashed potatoes, and stuffing with it, and I always make sure to mix a little cranberry sauce in each bite too.

And of course, I make a “gravy lake” in my mashed potatoes by creating a hole in the center and filling it with gravy. It wouldn’t be Thanksgiving without it!

You really only need two ingredients for turkey gravy: flour and turkey drippings.

And some salt and pepper, for seasoning.

I always find that I have at least two-three cups of drippings at the bottom of my roasting pan after cooking the turkey. This recipe is for 2 cups of gravy, but let’s be serious: you’re going to need more than that.

So you may have to supplement with some butter and homemade turkey stock in order to   quadruple this recipe.

If you plan on roasting a turkey for Thanksgiving, you absolutely need to make gravy from the drippings.

If you throw those gorgeous drippings away and opt for store-bought instead, you and I are NOT friends anymore.

There is so much flavor in the liquid at the bottom of the roasting pan, and it makes the perfect base for turkey gravy.

First, you’ll need to separate the liquids from the solids. I usually just pour the drippings through a mesh sieve. If you want the drippings to be EXTRA clean, you can add a layer of cheesecloth to the mesh sieve to really catch everything.

After pouring the drippings, I usually wait for about 10 minutes for them to cool off a bit and for the fat to really separate and float to the top. Then, it’s easy to skim off the fat for the base of the gravy using a spoon.

To make the gravy, you’ll first heat up the turkey fat in a large skillet. If you don’t have enough, you can supplement with butter.

Then, you’ll add some flour. Whisk the fat and flour mixture continuously and continue to heat over medium-high heat for 2-4 minutes to make a roux. The texture will become similar to wet sand, and the color should change to more of a tan.

You can continue cooking for longer if you like- the color will become darker and the flavor richer. However, the thickening power of roux decreases the darker the color becomes, so you may need to adjust your ratios.

Speaking of ratios, it’s really easy to increase or decrease the amount of gravy you are making. In general, the ratio for gravy is for every 1 cup of liquid, use 2 tablespoons flour and 2 tablespoons fat.

After your roux is done, just pour in the rest of the drippings (supplementing with homemade turkey stock if needed) and bring to a boil, whisking, then simmer on low until it’s thickened. Season with salt and pepper, and you’re done!

If you are planning on making more than 2 cups of gravy, you’ll almost certainly need to supplement with stock, since there won’t be enough liquid from the drippings.

Before cooking the turkey, you’ll remove the neck and giblets from the package. Just place them in a medium pot (minus the liver- it’s too strong in flavor) along with a couple of carrots and celery ribs cut into pieces, and an onion, quartered. No need to peel anything!

Season with just a little salt and throw some peppercorns in there, too. Then, bring to a boil, cover, and simmer on low for two hours, or for as long as your turkey roasts. Strain through a mesh sieve and you’ll have delicious homemade turkey stock to add to your homemade gravy (or to use in soups or stews later).

One final thing- it’s possible to make turkey gravy from cornstarch instead of flour. This will provide a gluten-free option. Here’s a great recipe that will show you how to do it!

For a vegetarian gravy option, try this mushroom gravy.

And if you for some obscure reason happen to have any leftover gravy, it can be frozen up to 6 months in an airtight container.

Here’s the recipe for how to make classic turkey gravy from drippings! 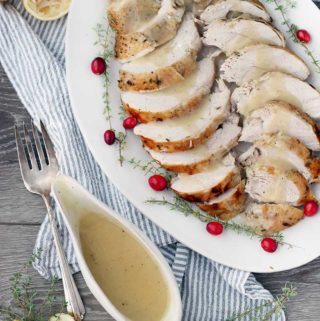 Making classic turkey gravy from scratch from the drippings at the bottom of the roasting pan is so easy and SO much better than store-bought gravy! Whip up a batch in only 15 minutes with this easy recipe.
5 from 25 votes
Print Pin Rate
Course: Sauce
Cuisine: American
Prep Time: 5 minutes
Cook Time: 10 minutes
Total Time: 15 minutes
Servings: 4 servings
Calories: 121kcal
Author: Elizabeth Lindemann

As an Amazon Associate I earn from qualifying purchases. DISCLAIMERS
487 shares
487 shares