I’m like Pavlov’s dog. Except- instead of when a bell rings, I salivate at the mere mention of the word “gravy.” And with Thanksgiving coming, I’ve got gravy on the brain. Oh, and of course- family, gratefulness, turkey, stuffing, vacation from work, and all the other things that come with the holiday.

Here is an AWESOME gravy recipe I made with Crispy Oven Roasted Chicken Thighs and mashed potatoes. (See? Promised the recipe was coming soon!) If you are either: a) looking to switch up your gravy beyond the traditional kind for Thanksgiving, or b) needing a yummy vegetarian/vegan gravy option for the holiday, look no further than this Easy Mushroom Gravy. 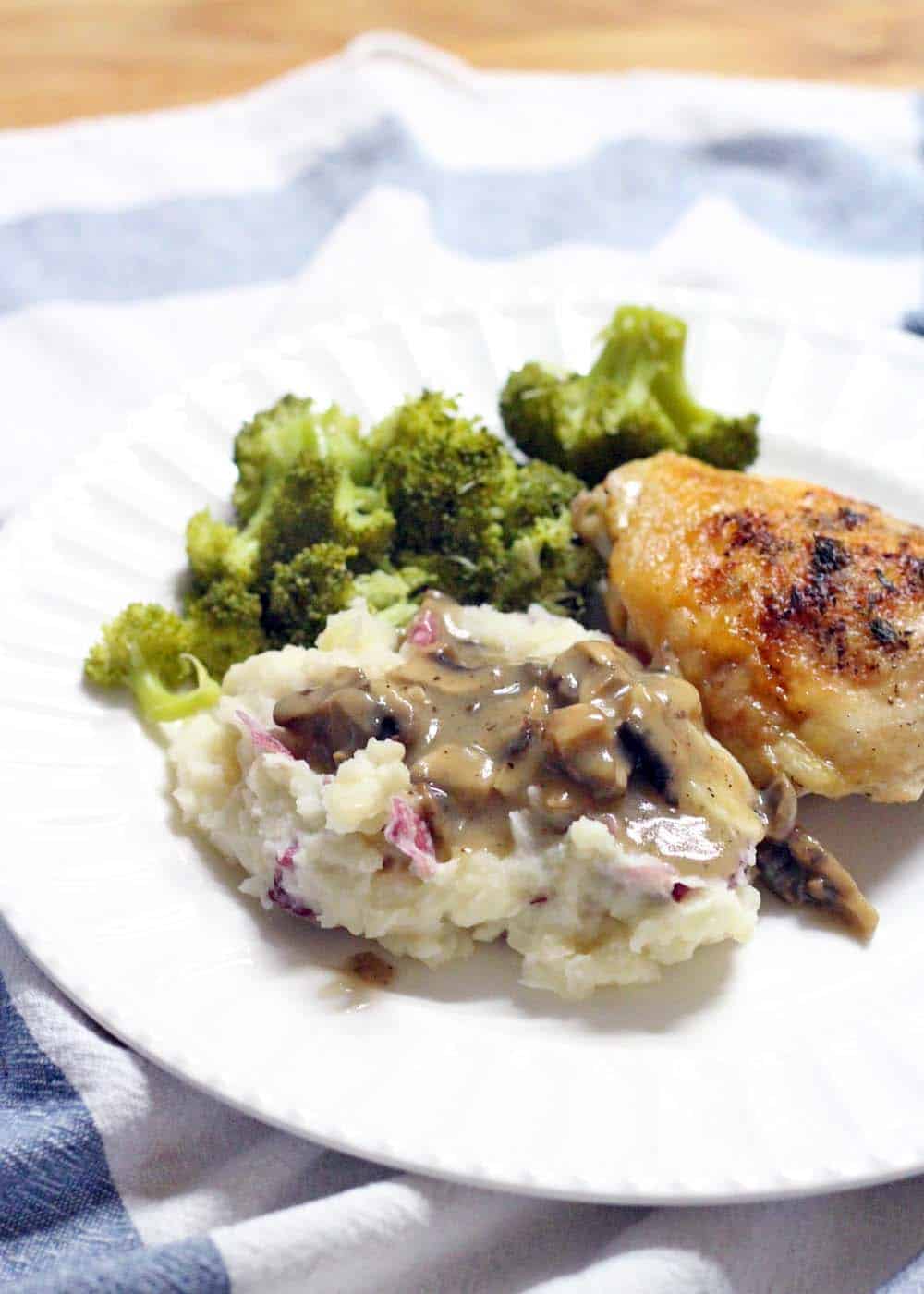 The thing I love about gravy is how versatile it is. You can make it out of a lot of different kinds of ingredients. People usually think of it as meat-based, and indeed- many of the tastiest and most traditional gravies are made with the drippings of roast meat (such as turkey on Thanksgiving!).

But gravy can be vegetarian, and even vegan, and still very very tasty.

There’s a simple ratio to making the perfect gravy every time: 1 tablespoon of fat to 1 tablespoon of flour to 1 cup of liquid. And liberal amounts of salt and pepper, of course! The recipe below doubles this ratio. 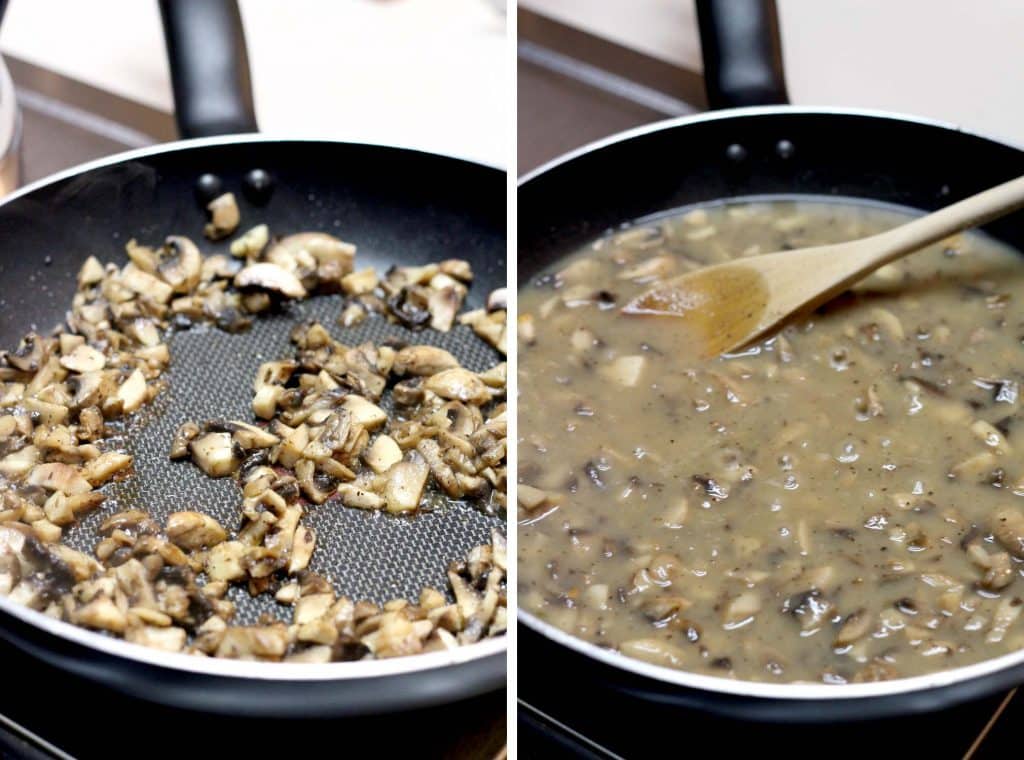 The traditional (non-vegetarian) way of making gravy involves saving the drippings from roasting a turkey or chicken. When you are done cooking it and the meat has been removed from the roasting pan, transfer the drippings to a Pyrex Measuring Cup

or a fat separator

Use the rest of the drippings for the broth, mixed with more broth if necessary (or diluted with water, since these drippings pack a ton of flavor!).

And to make this delicious mushroom gravy: just sauté some chopped mushrooms in the fat, add some flour to thicken, add some broth, salt, and pepper, and viola! Gravy. Easiest thing in the world. 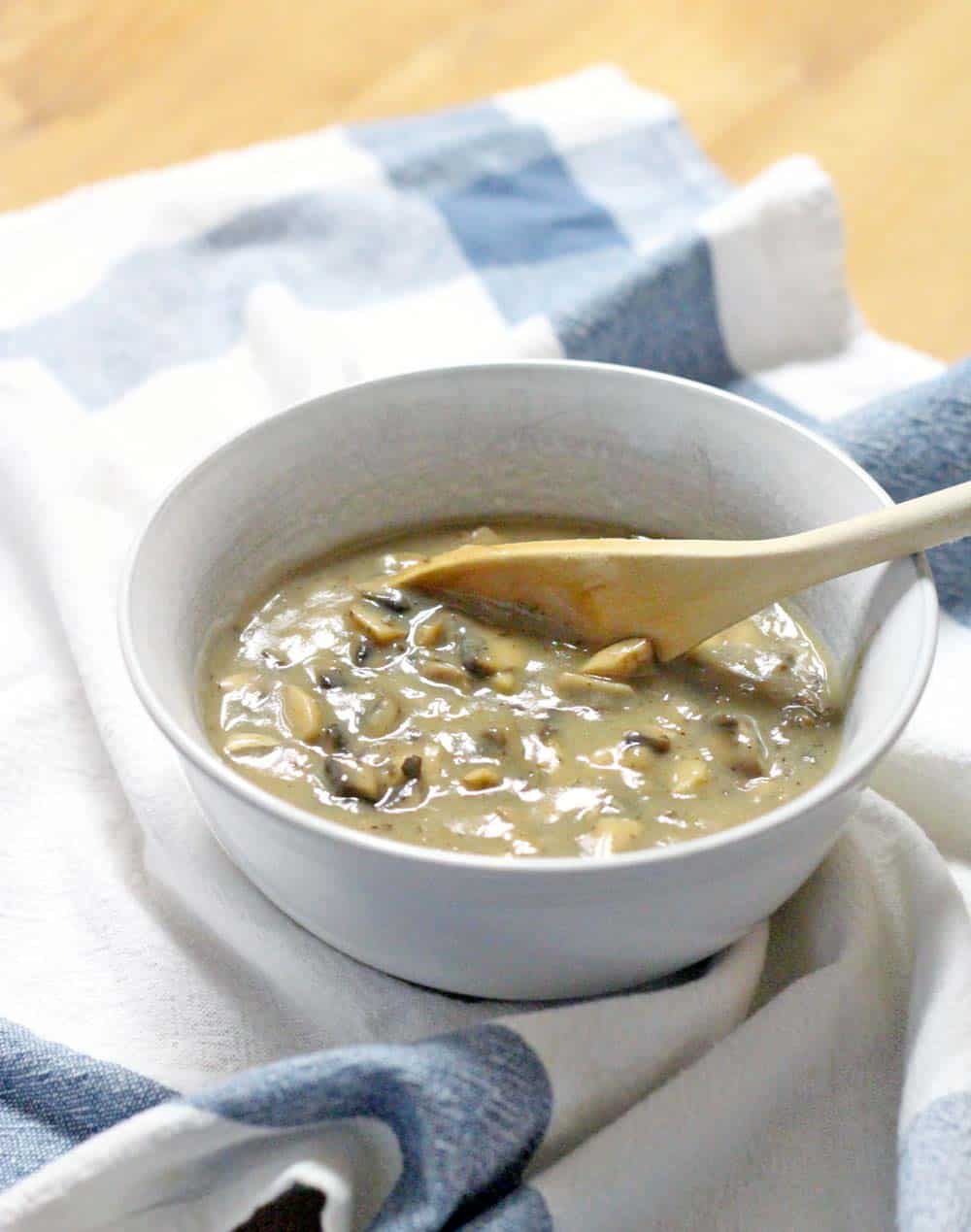 This can also be used as a base for anything that requires cream of mushroom soup. Just add some cream or milk and you have a staple ingredient that’s MUCH healthier and tastier than its canned counterpart.

or another grain-free thickener.

Now, this is the MOST IMPORTANT PART. Are you paying attention? Good. Serve this gravy over mashed potatoes, but be sure to make a gravy lake by forming a crater in your potatoes in which to store an obscene amount of gravy. It’s the only way to eat it. Promise you won’t be disappointed. 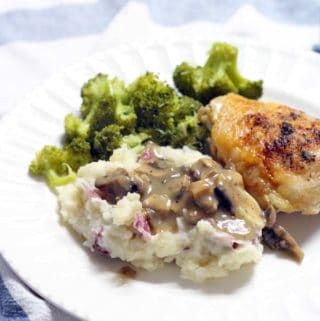 As an Amazon Associate I earn from qualifying purchases. DISCLAIMERS
160 shares
160 shares