I just LOVE this quick and easy chicken noodle soup recipe. It’s packed with flavor but so easy to make from scratch- so even when you’re feeling under the weather, or on a busy weeknight when you just want some comfort food, you can whip it up in only 30 minutes. 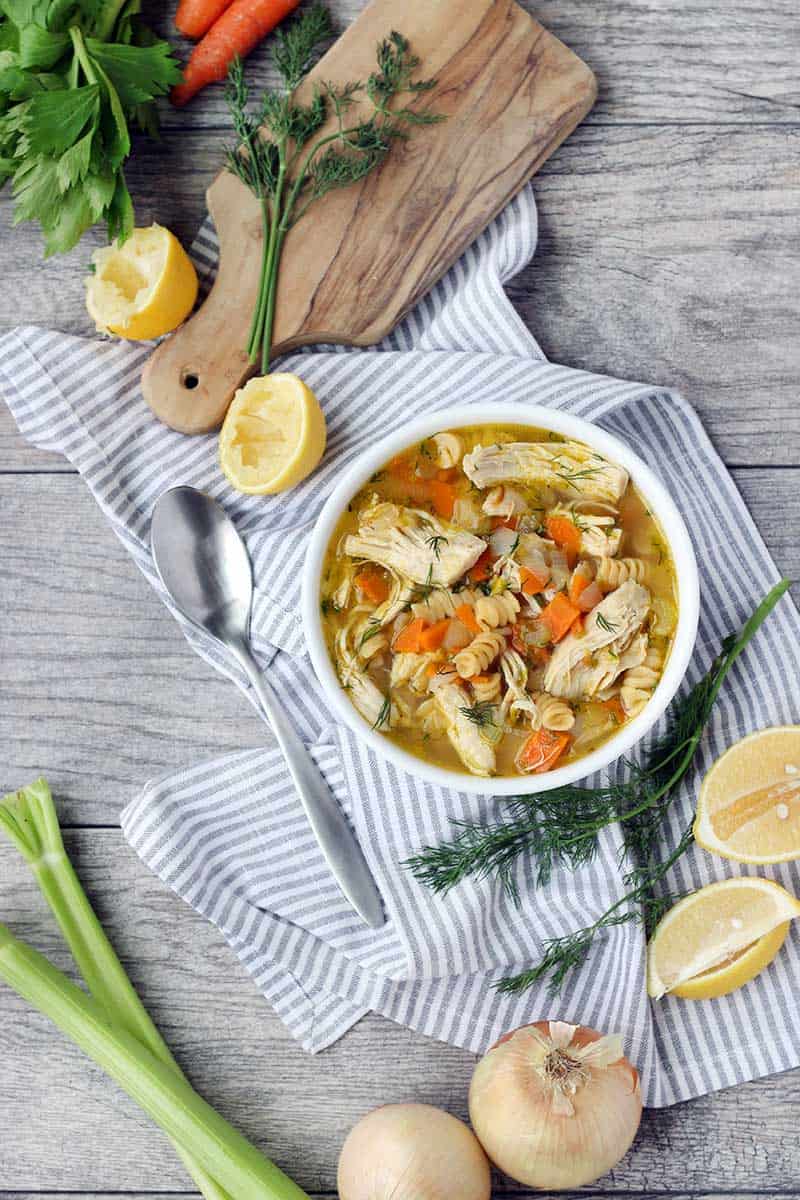 If you cook chicken noodle soup from scratch, usually it involves boiling a whole chicken in water, removing the chicken, letting it cool, removing the meat, and adding it back into the pot. It’s labor intensive and takes quite a bit of time, but it does taste excellent.

I wanted to develop a chicken noodle soup recipe that was fast and easy but still had deep, delicious flavor with a from-scratch feel. There are a few tricks I used to get awesome flavor in a short time, as well as make it a little healthier and lower in fat! 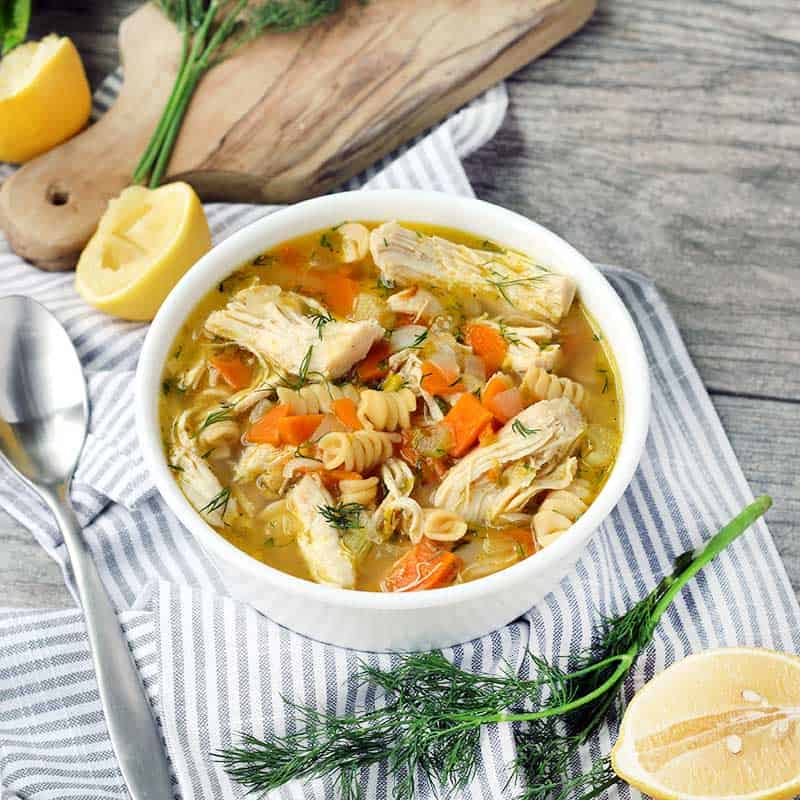 To save a lot of time, I used store-bought, already made chicken broth.

I often have homemade chicken broth in my freezer – I save vegetable scraps and chicken bones in a gallon sized plastic bag in the freezer and when it’s full, I boil everything together to make stock. If I’d had any, I would have used it for this.

But store-bought chicken broth is a great alternative when you’re in a hurry. Unfortunately, it usually has less flavor than homemade.

So here are a few tricks to boost the flavor.

First, I browned the mirepoix in butter.

Mire-what? Mirepoix. It’s just a fancy name for the vegetable base of this chicken soup- and many other soups and stews. A simple mixture of finely diced onions, carrots, and celery. And do make sure those carrots are finely diced, so they cook all the way in a short amount of time.

Sautéing these veggies in 2 tablespoons of butter until they were browned helps enhance their flavors. As you sauté, the water evaporates from the vegetables, leaving behind a more concentrated flavor with a better texture. And when browning occurs, it means the sugars in the veggies are caramelizing, which adds an almost unnoticeable hint of sweetness to the soup and deepens the overall flavor.

And the browned parts get incorporated all into the soup, which tastes sooooo good. 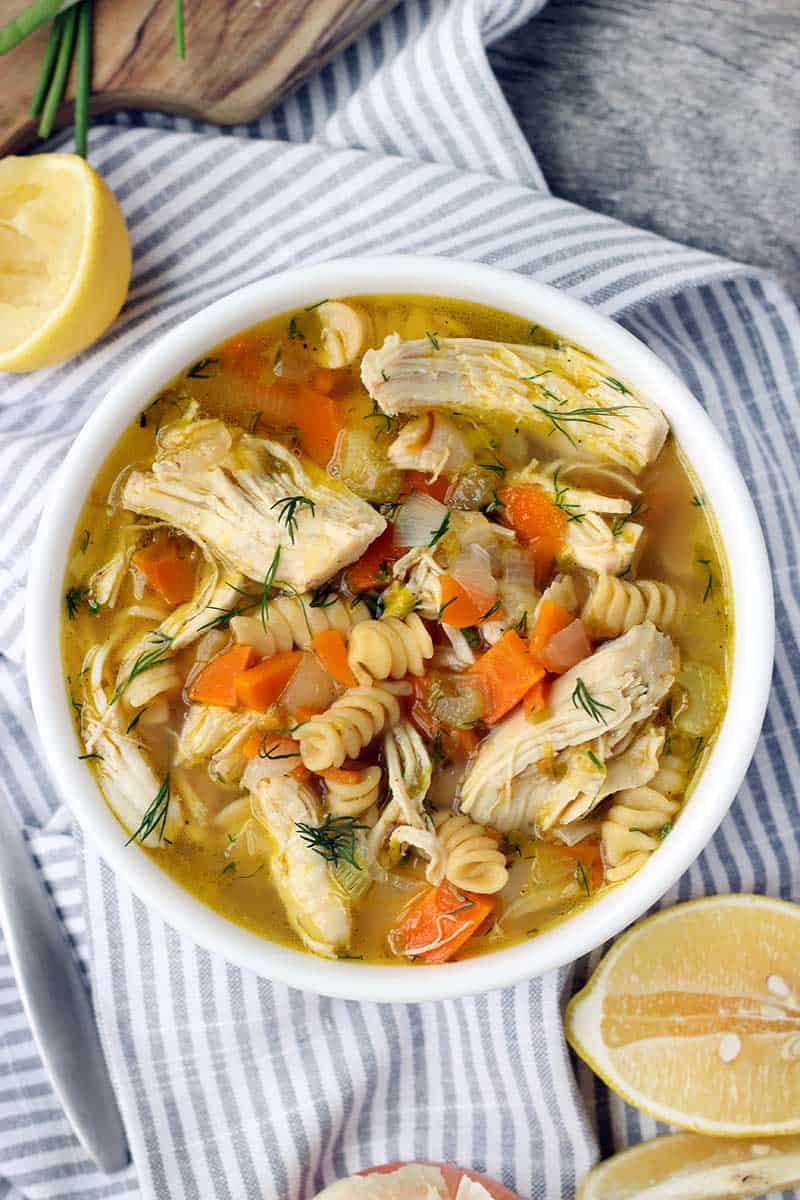 Second- I poached chicken breasts directly in the broth after adding it to the sautéed veggies, along with some salt and pepper.

Cooking with boneless, skinless chicken breasts ensures you are using all lean meat. And since there are no bones, and it’s already pretty well trimmed with no skin, there’s NO prep involved. Just plop the chicken breasts right in the liquid and let them boil away until they are cooked, which only takes about 15 minutes!

Chicken-ey? Is that a word? It is now.

And do make sure you add salt and pepper at this point- the chicken will absorb it as it cooks, flavoring the meat.

You can also use any cooked chicken meat you want- from a slow cooker whole chicken, a roast chicken, etc. 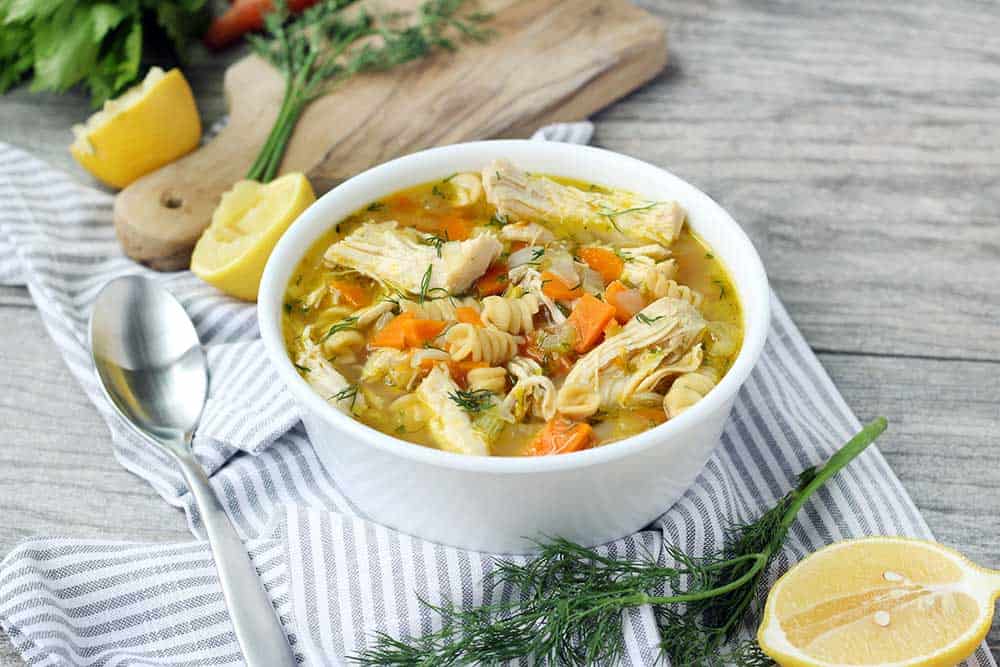 Third- after the chicken finished cooking, I shredded it into large chunks.

I don’t know- there’s something more “homemade” tasting about chicken soup with large chunks of chicken. Maybe because when you eat the canned version, it only has like four teeny microscopic pieces of actual chicken meat.

I wanted the soup to be hearty and filling, so large chicken pieces it is.

While I shredded the chicken, I usually throw some pasta into the soup to cook, which only takes about 6 minutes. You can use ANY kind of pasta you want. Whole wheat, regular, and any shape.

But this time, I was feeling super lazy and used an already cooked store-bought rotini!

I’ve made this chicken noodle soup with spaghetti before, but I broke up the noodles before adding it in so it would be easier to eat.

For a gluten or grain free option, you can use something like chickpea pasta or rice pasta. Or, use actual rice instead of pasta! Just make sure to add it with the chicken so it has time to cook, rather than after. 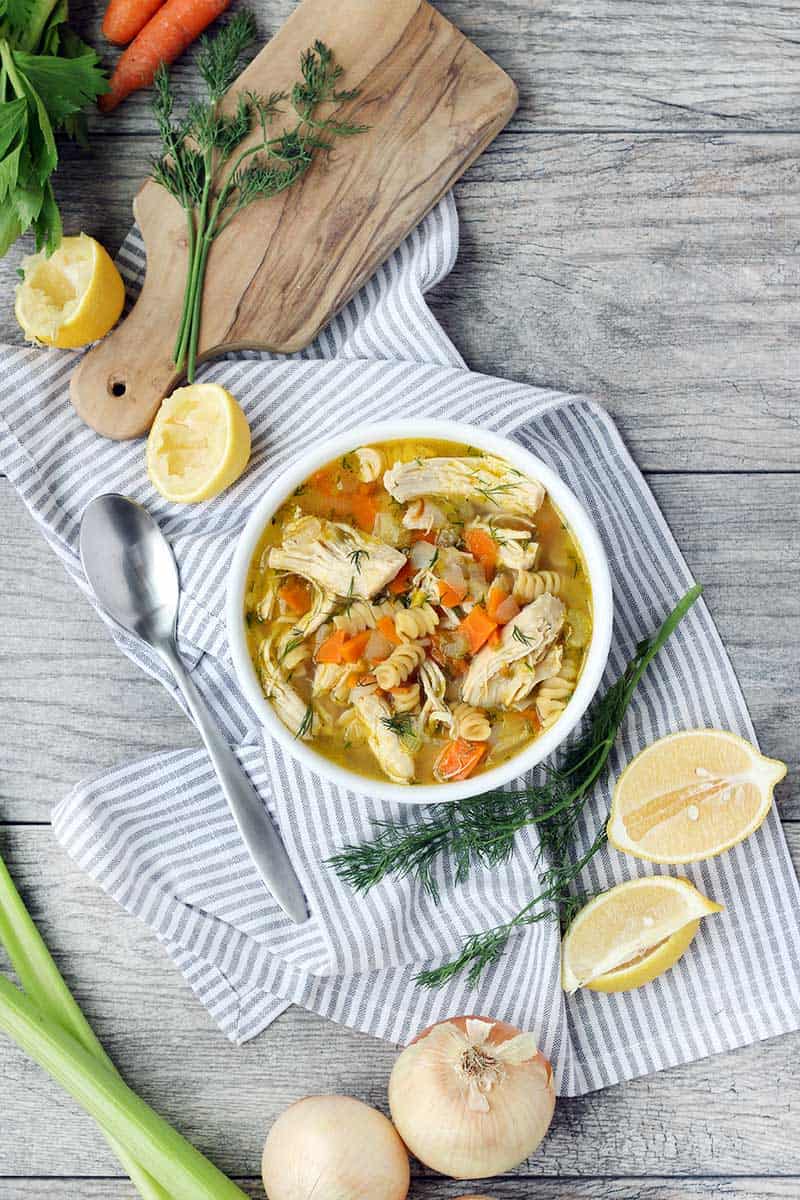 Finally, after the soup was completely done and I had turned off the heat, I added some fresh lemon juice and fresh dill to the pot.

Gosh. There is just something about chicken soup with lemon and dill. The flavors are a match made in heaven.

And as an added bonus: lemon juice is high in vitamin C, which is great if you are having this soup when you’re sick!

Before I go, let’s talk about making this ahead of time and freezing, shall we?

I always get asked the question: “can you freeze chicken noodle soup?” Yes, with some adjustments.

The thing about the pasta is that it will get very, VERY mushy if you freeze it. Still edible, but not the tastiest.

If you want to freeze this, I recommend making the soup exactly as directed but without the pasta. Then, when you are ready to make it, you can defrost it, heat it up, and cook the pasta as it heats directly in the soup. It should be perfect and ready to go! 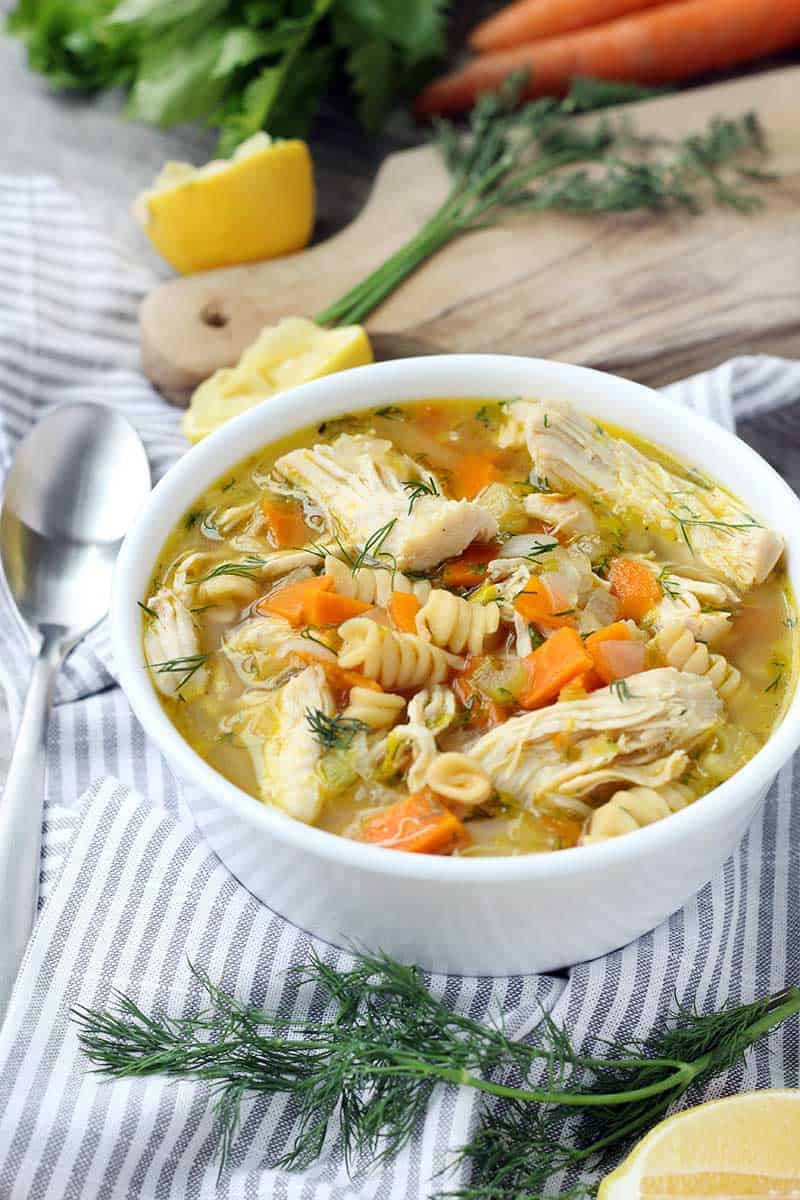 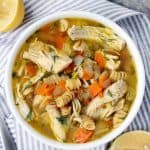 As an Amazon Associate I earn from qualifying purchases. DISCLAIMERS
636shares
636shares