Home » All Recipes » 24 Classic Thanksgiving Recipes in your Crockpot!

I’m going to say something right now, and I don’t want you to freak out. Maybe you should sit. Are you sitting? Good.

Thanksgiving is in ONE WEEK.

There. I said it. The cat’s out of the bag. How, by the way, did that possibly become a saying? What cat was in a bag and then got let out and therefore spilled the beans about a big secret? Sorry. Sometimes I get distracted. (Ooo look! Something shiny!)

But don’t worry- Thanksgiving doesn’t have to be stressful if you are hosting or in charge of bringing something! Especially if you have a slow cooker! You can cook LITERALLY ALL of your favorite classic Thanksgiving dishes using your trusty Crockpot, saving you labor, stress, and most of all- oven space.

Here are 24 Classic Thanksgiving Recipes that you can make in your slow cooker! (And don’t forget to check out last year’s round-up of 15 Make-Ahead Thanksgiving Dishes for a Stress-Free Holiday.) 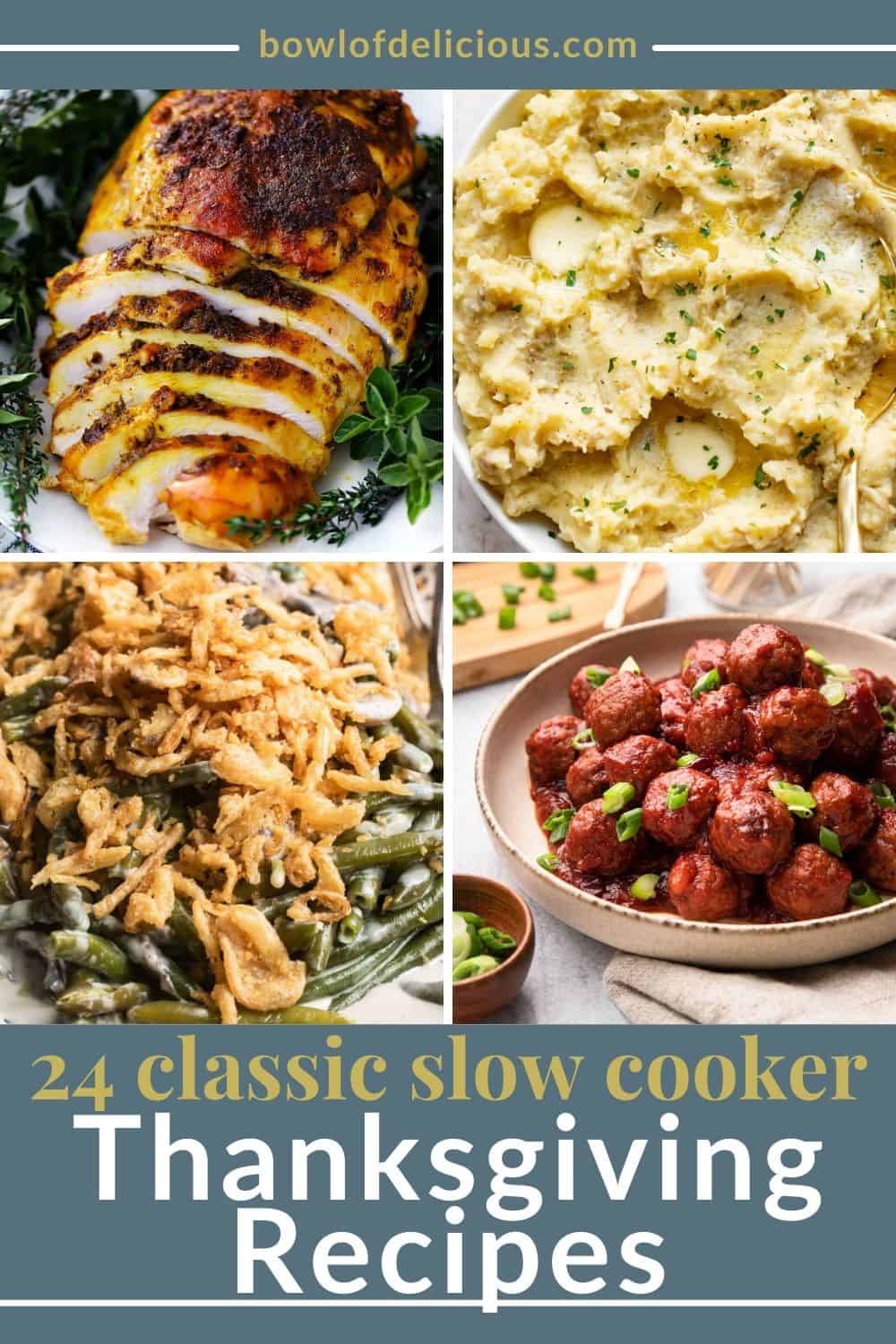 from Amazon.com is only $29.99! And it comes with handy latches that secure the lid, so you can take it to someone else’s house full of delicious, hot food.

Note: I usually post 100% real food recipes. But, this is THANKSGIVING we’re talking about! While many of the following recipes are made with clean ingredients, I also included some that have regular old sugar or other processed ingredients.

Oh, no. This is not just for your side dishes! In fact, why don’t you fill up the oven with your side dishes (which, in my opinion, are frequently better than the turkey) and let your slow cooker make perfectly juicy turkey. This is particularly a good idea if you are having a small get together for the holiday, since a slow cooker won’t fit a monster-size turkey. 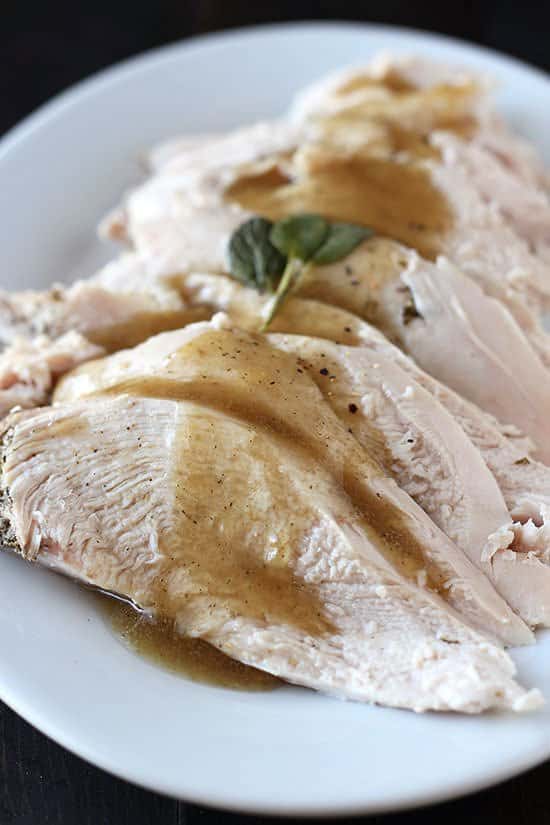 Handle the Heat has a great recipe for a turkey breast cooked in the Crockpot, and here’s one from Hamilton Beach that uses loads of herbs to flavor it. Practical Stewardship even has a recipe for an ENTIRE whole turkey cooked in the slow cooker! It’s smaller than your average Thanksgiving turkey, to be fair, but it looks amazing. Even when it’s not Thanksgiving anymore, I fully intend on doing this just to make turkey for sandwiches- much more affordable than buying sliced deli meat.

And no one is going to judge you if you decide to make a whole chicken in your crockpot instead of a turkey. You’re a grown-up and you can do what you want.

One quick note: if you are looking for deliciously crispy skin, the slow cooker is not the route you want to take with the turkey. In that case,use your oven for the main event and your Crockpot for a side- or for a dessert!

Or, “dressing,” as they call it in the South. Stuffing is a staple at any Thanksgiving table and don’t you dare skip it. I’ve never actually cooked stuffing IN the turkey- always separate. And if you’re going to make it separate anyway, why not use your slow cooker? 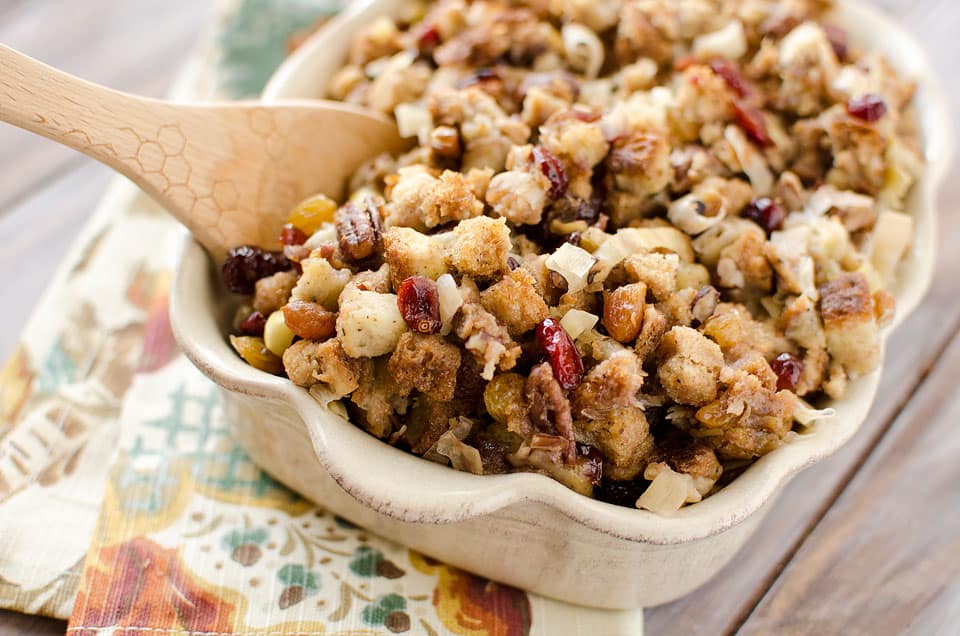 This Crockpot Cranberry Pecan Stuffing from The Creative Bite is an awesome seasonal twist to a classic. If you’re looking for a “real food” version, Nourishing Joy has a great recipe that is simple, classic, and in which you can use any kind of bread you want (whole wheat, gluten-free, etc.). And since I now live in the South, I would be remiss if I forgot to include a classic cornbread dressing in this post! Miz Helen’s Country Cottage has put together a simple cornbread dressing recipe– adding sausage is optional, but highly encouraged.

Delicious AND extremely healthy, sweet potatoes make an awesome addition to any Thanksgiving meal! They are super high in vitamins A and C. This clearly means that when you load them up with butter and sugar, the good cancels out the bad… right? No, that’s not right, but it’s Thanksgiving, so don’t think about it too much :-) 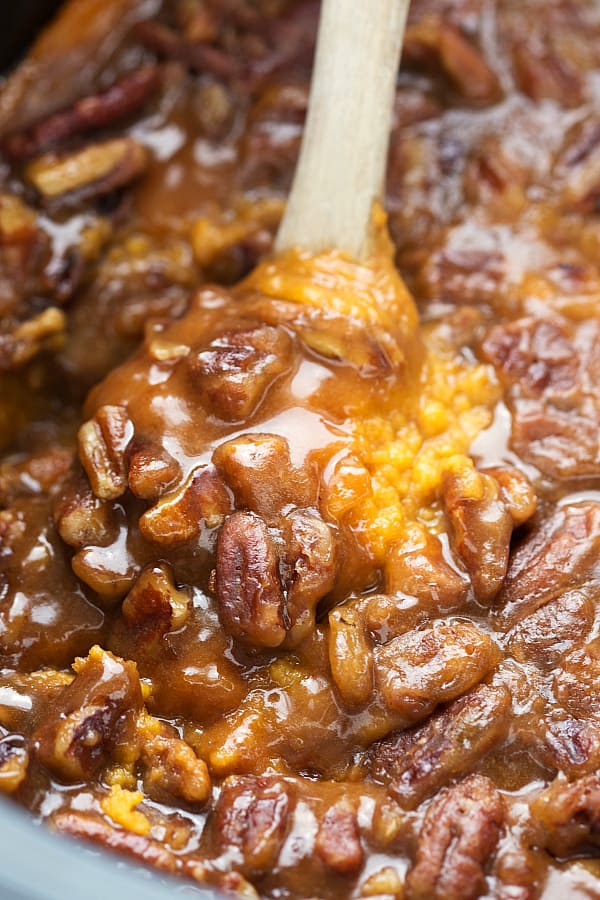 This classic sweet potato casserole from Chelsea’s Messy Apron is loaded with all the good stuff- brown sugar, pecans, butter, and whole milk. For those of you who prefer more savory options (I certainly do!), this spicy version from Kalyn’s Kitchen and this healthier garlic mashed version from Skinny Taste are excellent choices.

Love ’em or hate ’em, Brussels sprouts are a staple in many households on Thanksgiving. Generally, I think that roasting them in the oven is the way to get the best flavor out of these delicious little cabbages. But, there are some slow cooker versions that beg to differ! 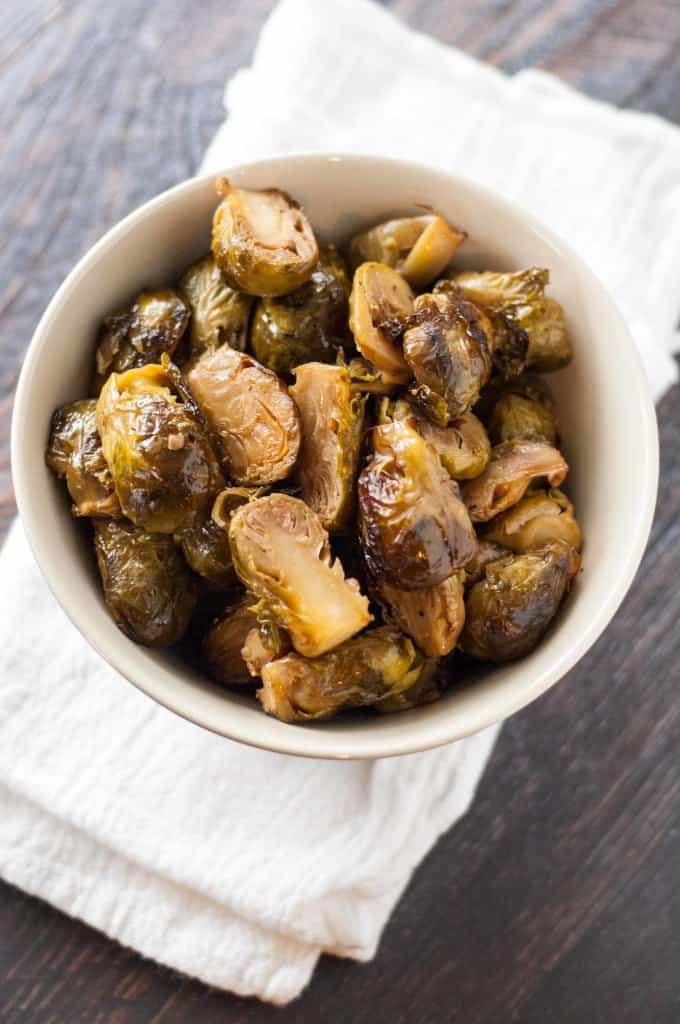 This simple version from Crockpot Gourmet uses only three ingredients, plus salt and pepper, to get perfect Brussels sprouts in the slow cooker. Looking to add a bit more flavor? These slow cooker balsamic Brussels sprouts from Damn Delicious add a bit of sweet and tangy to the naturally bitter flavor of the sprouts and are finished with a bit of freshly grated Parmesan cheese. YUM. Or, try a version made with Dijon mustard and butter!

Ah yes. Cranberry sauce. The only time of year you will ever eat it is on Thanksgiving. And even though it’s one of the easiest things to make from scratch, so many people frequently buy the canned stuff! If you prefer canned cranberry sauce, I won’t judge you. But there is absolutely no excuse to not make it from scratch with these easy crockpot versions. Whatever you do, be sure to make extra so you have some for leftover turkey sandwiches. 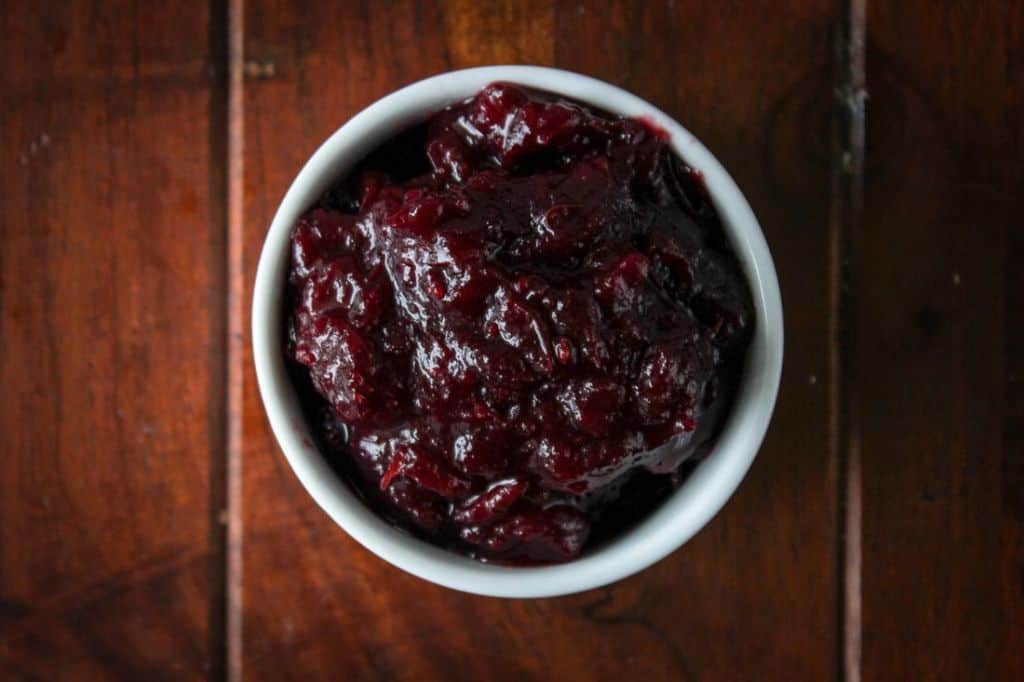 Here’s a traditional recipe for cranberry sauce in the slow cooker from Bakes in Slippers that uses very few, simple ingredients (with a hit of citrus from orange and/or lemon zest). This version from The Lemon Bowl adds a bit of spicy zing with ginger (which, by the way, can help promote good digestion after you inevitably eat far too much for Thanksgiving dinner). Finally, an important part of making cranberry sauce is adding sugar to balance out the tartness of the cranberries. This real food version from Real Food Real Deals uses maple syrup and apples to naturally sweeten the recipe.

I must be the only person in America that didn’t grow up with Thanksgivings that had green bean casserole. Go ahead. You can feel bad for me if you want (but let it be known that I was certainly not deprived, since my Greek family made enough delicious food to feed at least ten times the amount of people present!) Now that I’ve tasted the glory of this classic Thanksgiving staple, I don’t think I can go another holiday without it! Luckily, it’s another dish that’s super easy to make in the slow cooker. 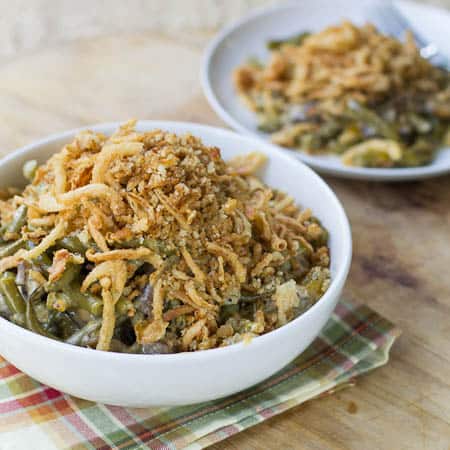 Here is a from scratch version from Spicy Southern Kitchen that uses no canned soup. The only pre-made ingredient is the French fried onions (which, let’s be serious, MAKES the casserole). If you want a version with canned cream of mushroom soup, I will certainly not judge you- in my opinion, all food rules go out the window on Thanksgiving! This version from Crystal and Co. is a simple canned soup version. And if you want a healthier option, try this from scratch recipe from Livestrong- it suggests sauteing onions for the top rather than using canned fried ones.

Perhaps the most vital part of any Thanksgiving meal, mashed potatoes have been eaten by Americans for over two centuries by gently forming a depression in their center and filling it with gravy until it overflows, thus creating the holy grail of Thanksgiving dinner: a gravy volcano.

But seriously- you CANNOT have Thanksgiving without them- gravy or not! Luckily, they are extremely easy to make in your slow cooker. And another plus- keeping your slow cooker on warm will ensure the potatoes stay nice and warm for anyone who wants several helpings. 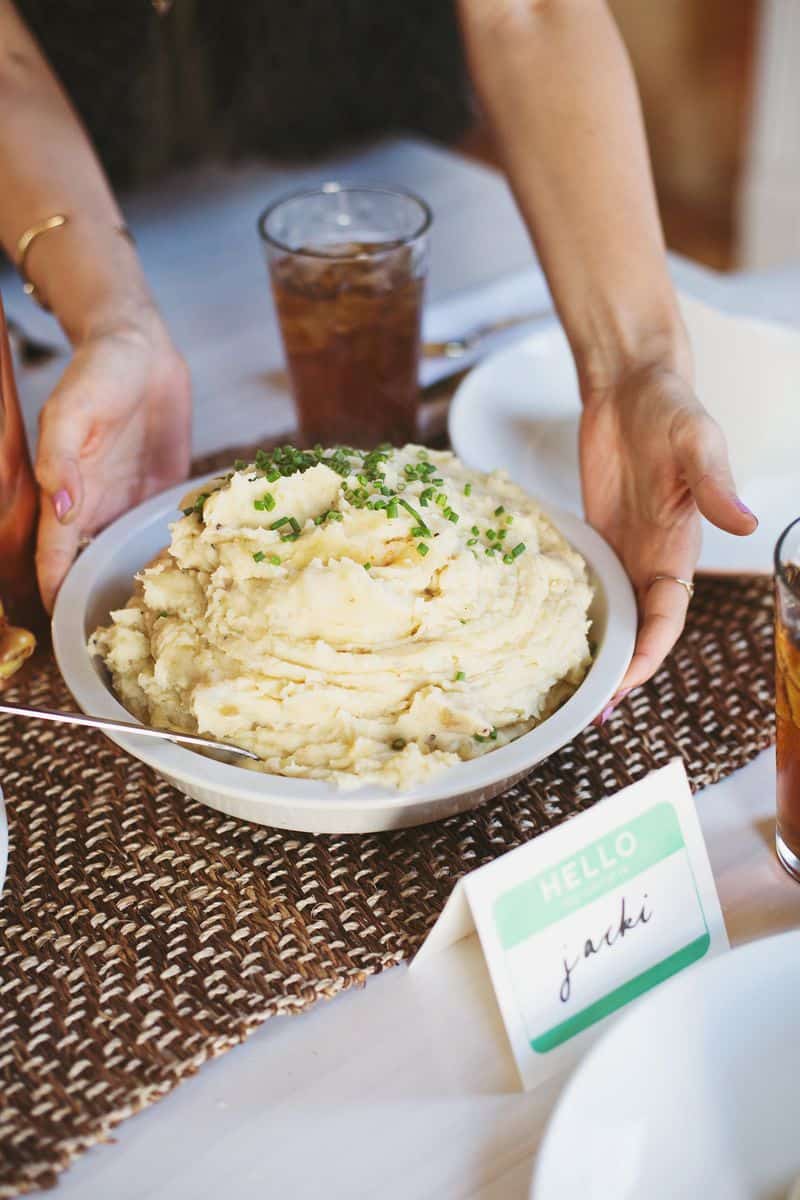 I may not have grown up with green bean casserole on Thanksgiving, but my family more than made up for it with desserts. I’m talking an average of a pie per person. One person would say they were making dessert, and they would make about three pies, and inevitably other people would bring cookies, more pie, and more pie. The Greeks know how to get it done!

You can use your slow cooker to make at least one of your desserts to make your life easier. 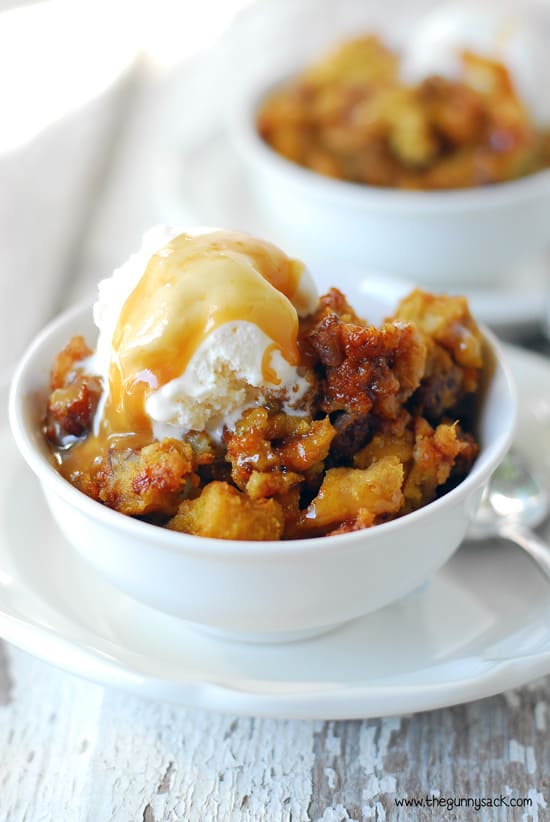 Here’s a bit of a non-traditional idea: bread pudding. I know pie is the usual festive dessert of choice, but this slow cooker pumpkin pecan bread pudding from The Gunny Sack has all the flavors of Thanksgiving and switches it up a little from the usual. Plus, vanilla ice cream on top of warm bread pudding… oh goodness. Delicious!

And if you’re more of a traditionalist, here’s a pumpkin pie by Recipes that Crock and a pecan pie from Spicy Southern Kitchen- both done in the crockpot! Super easy.

That’s all, folks! Have a WONDERFUL Thanksgiving, everyone! May it be filled with family, friends, fun, and of course… food :-)

Did you make this recipe? I'd love to hear how it went! Comment and rate it below :-)
Previous Post: « Easy Mushroom Gravy (Vegetarian/Vegan Optional!)
Next Post: Spicy Mexican Maple and Molasses Hot Chocolate »

As an Amazon Associate I earn from qualifying purchases. DISCLAIMERS
201shares
201shares