If you’ve never had Greek Stuffed Peppers (or Gemista / Yemista), you’re in for a treat! These inexpensive beef and rice stuffed peppers are packed with flavor from onions, herbs, and tomato, with plenty of olive oil. Blanching the peppers before stuffing them ensures that they’re soft, with no overpowering pepper flavor and a homogenous texture throughout. This is a wonderful make-ahead dinner (that just happens to be gluten and dairy free!).

This is my family’s recipe (with some liberties taken to make them easier) and once you try these stuffed peppers, you’ll have a hard time going back to any others. My husband, a self-proclaimed stuffed pepper hater, can’t get enough of these. Neither can my kids. Neither can I. So much yum.

Not only is the stuffing absolutely delicious (and can be used for all sorts of things!), but these peppers are light years better than other stuffed pepper recipes because of how soft the bell peppers are.

Other stuffed pepper recipes stuff raw peppers and heat in the oven until warmed up, but the peppers don’t cook enough. You’re left with a crunchy pepper with a flavor that overpowers everything else.

Not with this recipe! The halved peppers are blanched before stuffing, resulting in a super soft texture and just-enough pepper flavor.

And the best part? You can easily make these ahead of time and they’re cheap to make! Let’s get to it.

Can I use the stuffing for veggies other than bell peppers?

Yes! The greek word Gemista refers to stuffed vegetables, not just peppers. Hollowed out tomatoes (which don’t need to be blanched first), zucchini, or stuffed cabbage is perfect for this stuffing. And the stuffing is absolutely delicious on its own as well – eat it in a bowl with crumbled feta, chopped cucumbers and tomatoes, and tzatziki on top!

What kind of rice is best for this?

My family has always used converted rice (aka parboiled rice, such as Ben’s original). It’s not starchy, so it holds its shape without getting mushy, and I love the texture in this recipe. But you can use any rice you want – white, brown, or even wild. Different rices have different cooking times and liquid requirements, so keep that in mind. Arborio rice, for example, requires more liquid and more time than short grain white or basmati rice, which is the fastest to cook. To save time, grab some already cooked rice from the store!

Can I freeze stuffed peppers?

Yes! You can freeze stuffed peppers assembled and ready to cook (either in a roasting pan or individually, for easy meals for one or two people). Defrost completely before cooking as instructed. You can also freeze them once they are already cooked. Here’s more on how to freeze stuffed peppers. 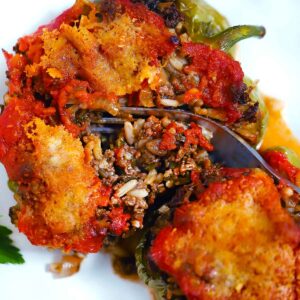 
Tried this recipe?Mention @BowlofDelicious or tag #BowlofDelicious!
« Caprese Sandwiches
Healthy Green Goddess Dressing / Dip »
Did you make this recipe? I'd love to hear how it went! Comment and rate it below :-)