This Bacon and Swiss Chard Quiche has the most decadently creamy texture thanks to the genius inspiration of Julia Child! It’s the perfect make-ahead breakfast, brunch, or even lunch or dinner served with a side salad.

This recipe was created out of the need to use up a bunch of Swiss chard I harvested from my garden before replacing my raised beds. A friend brought over some eggs from his backyard chickens, and I had exactly four slices of bacon in my fridge, just enough heavy cream leftover from another recipe, and a random frozen pie crust in my freezer.

I LOVE when the stars collide and you have everything you need to make something delicious without having to go to the store! Especially when you can clear out space in your fridge and freezer in the process.

This recipe is a bit more complex and takes a little longer than my usual recipes, but here’s the advantage: it’s a great make-ahead meal that reheats beautifully. You can make it on the weekend and take slices to work for lunch all week long, or you can make it early in the morning and serve it room temperature a couple of hours later for brunch.

And it’s so delicious, it’s definitely worth the extra couple of steps, including blind baking the pie crust halfway and cooking the bacon and chard separately before adding them to the filling.

What is “blind baking” a pie crust?

Blind baking refers to the process of cooking a pie crust without any filling in it. It’s generally used when you need to fill a pie with a filling that doesn’t cook, such as with pudding or cream pies.

But for pies with a very wet filling, such as with this quiche, half-baking the pie crust before filling it helps the pie crust to not be too soggy on the bottom.

The process is simple: just line a pie dish or quiche dish with a pie crust and crimp the edges, just like you normally would for any pie. Then, place some parchment paper inside it and fill it with pie weights, or, if you’re like me and don’t have any, some dried beans (I used pinto since they were the cheapest at my store!).

You can also use rice, lentils, or other grains/legumes. I actually save my pinto beans for future makeshift pie weights. Keep in mind- you don’t want to actually cook with anything you use as pie weights!

Then stick the pie (on a rimmed baking sheet so it’s easy to get in and out of the oven) in a 400 degree oven for about 15 minutes. The pie crust will be perfectly half-cooked so you can fill it with the rest of the goodies that make this bacon and Swiss chard quiche so delicious.

What’s in the filling?

There’s so much goodness happening in the filling of this bacon and Swiss chard quiche.

I broke out the big guns for inspiration for this recipe by looking up Julia Child’s recipe for Quiche Lorraine in Mastering the Art of French Cooking. Her recipe called for a cup to a cup and a half of heavy cream. Who am I to argue with Julia?

So a cup of heavy cream, mixed with just three eggs, was the base for this custard. You can use milk if you want, or a combination, but really the cream makes the texture so dreamy.

The traditional Quiche Lorraine has only bacon, cream, and eggs. Super simple. I added a little cheddar cheese to the cream and egg mixture, along with some salt and pepper.

While the pie crust was blind baking, I cooked up some bacon in a skillet, removed it, then sautéed some onions and the chard (stems, finely chopped, and leaves, roughly chopped) in some of the bacon grease.

Then, the half-baked pie crust is filled with the chard mixture, spread out evenly on the bottom, and the cream/egg/cheese mixture is poured evenly on top. Use a wooden spoon to spread all the cheese out evenly, since it has a tendency to clump together.

Can I freeze quiche?

While I personally haven’t tried it (because I eat it all way too fast to freeze!), the consensus around the internet is that yes, you can easily freeze quiche.

You can freeze it before baking– cover it and wrap it tightly with foil and keep it in your freezer for up to two months. When you bake it, just stick it in the oven frozen and add another 10-20 minutes to the baking time.

Or, you can freeze it after baking– just bake it at 350 degrees F for 20-25 minutes until it’s warmed through. Or, you can also start it in a cold oven set to 400 degrees, so it gradually defrosts as the oven warms up, then bake for an additional 15-20 minutes after the oven has come to temperature.

One word of caution: glass or ceramic pie dishes will NOT work well for this method, since they can shatter under extreme temperature changes. If you use a glass or ceramic dish, I recommend defrosting the pie completely before cooking. Otherwise, a metal pie dish will be your best bet.

Next time, I’m definitely making two of these and freezing one.

Finally, if you don’t want to use Swiss chard in this quiche, no worries! You can easily substitute spinach or kale or your other favorite leafy green (the tops of beets would be great here) instead. And you can easily omit the bacon for a vegetarian version (use butter to sauté the veggies).

Like this Bacon and Swiss Chard Quiche recipe? You’ll love these other easy-to-make quiche recipes that can be made ahead of time: Crustless Spinach, Tomato, and Feta Quiche, Easy Zucchini Quiche, Mini Mushroom, Goat Cheese, and Rosemary Quiches, and Crustless Broccoli, Bacon, and Cheddar Quiche. 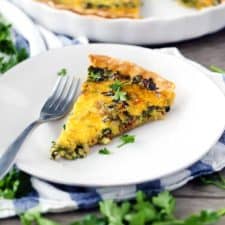 
Tried this recipe?Mention @BowlofDelicious or tag #BowlofDelicious!
« Irish Potato Leek Soup
20-Minute Honey Mustard Chicken »
Did you make this recipe? I'd love to hear how it went! Comment and rate it below :-)