This post is sponsored by Tyson Foods, Inc. All comments and opinions are my own.

This Bacon Wrapped Pork Loin with Apple Cider Gravy is a beautiful and DELICIOUS main course that can be assembled ahead of time! It’s sure to impress at a dinner party, but it’s easy enough to make for a casual Sunday dinner. 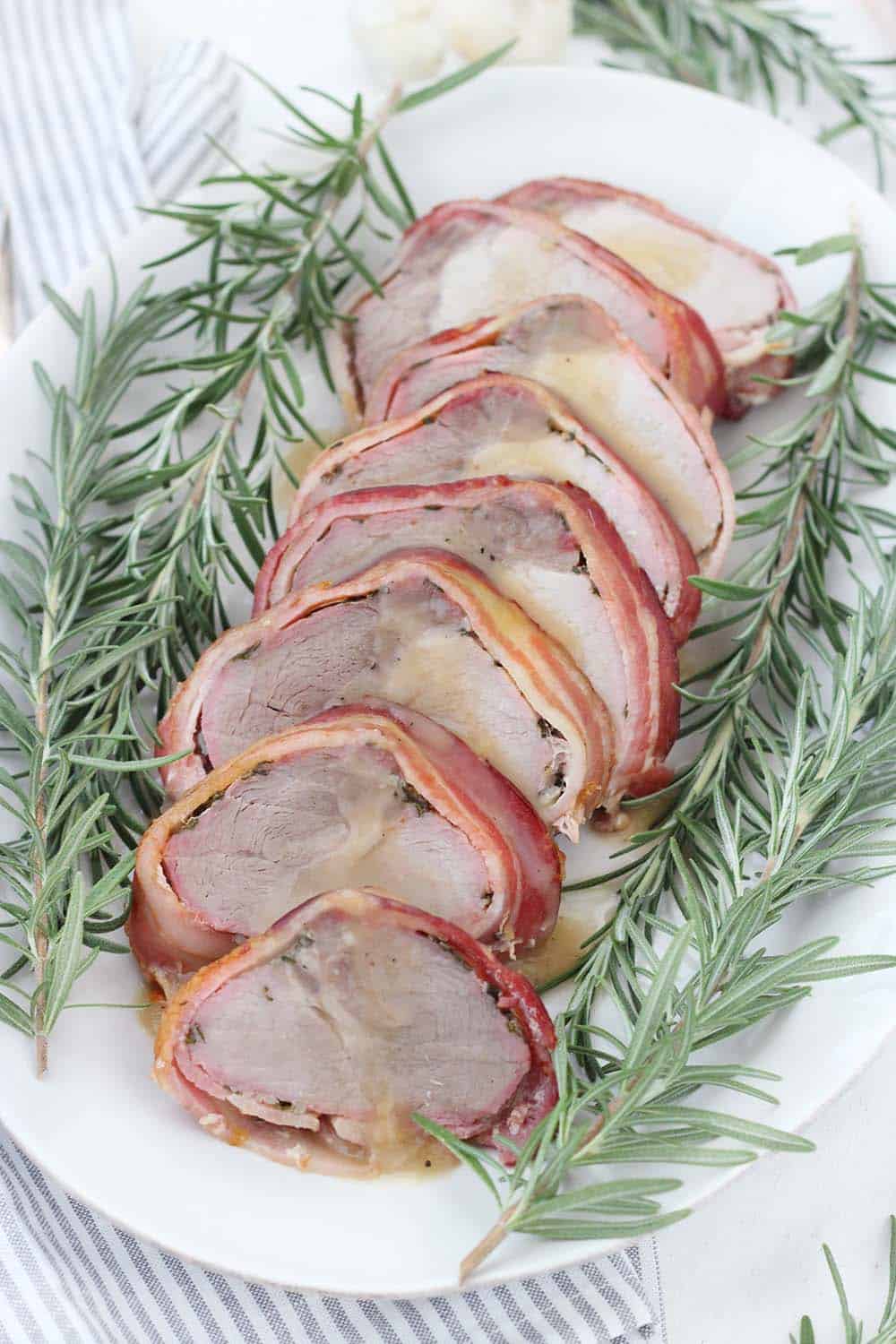 When I think of fall, and specifically fall food, I don’t think there’s anything more quintessential than pork with apples. And the flavor of the Wright® Brand Bacon is the perfect complement to slightly sweet apple cider gravy and juicy savory pork.

I used Wright® Brand Naturally Hickory Smoked Bacon for this recipe. If you follow my blog, you know I’m a fan of it.

Wright Brand Bacon delivers a high quality product in a few different flavors (including Applewood and Double Smoked, in addition to Natural Hickory Smoked) and the bacon is always thick-cut, hand trimmed, and hand selected.

I was able to easily find the bacon in the refrigerated aisle at my local H-E-B. And here’s something exciting: you can get a coupon for a dollar off from 8/30-10/8!

You know how I love a bargain. 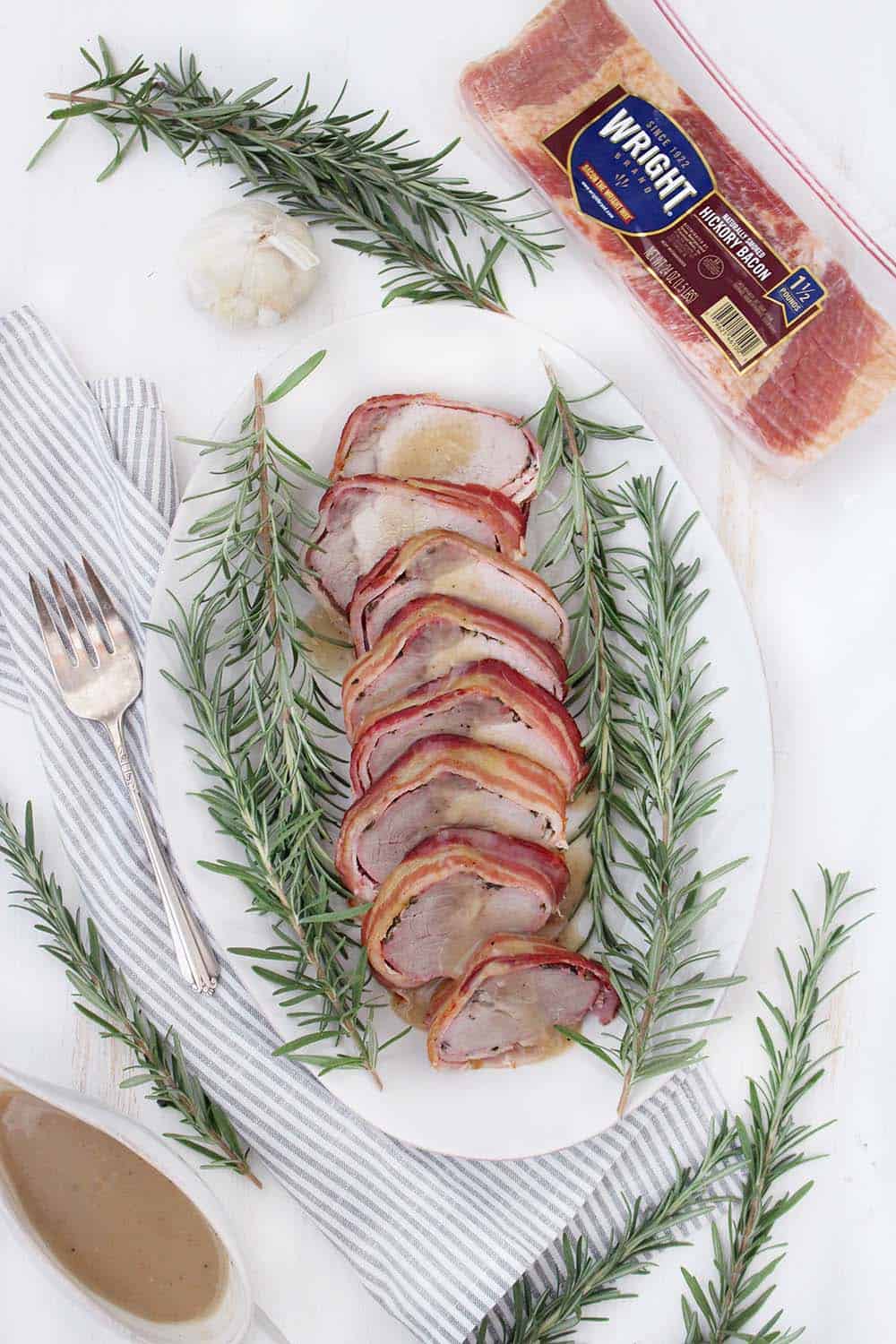 First, let’s talk about the pork.

You can read more about the difference between a pork loin and a pork tenderloin here. And there is a big difference, believe it or not!

Before doing anything, I marinated the pork in a mixture of fresh rosemary, garlic, olive oil, and salt. My favorite way to marinate meat is to put it in a freezer bag and push as much air out as you can. This way, the marinade coats all parts of the meat and you won’t have to turn it while it soaks in all the delicious flavor.

Alternatively, you can use an airtight container to marinate the pork loin. 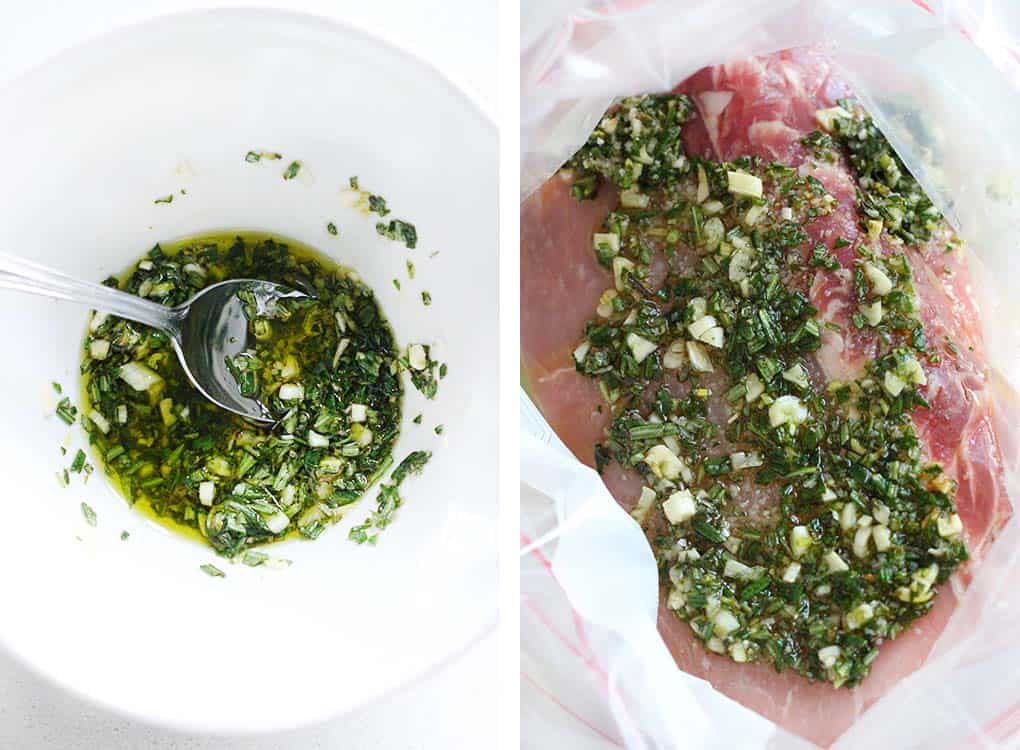 I marinated the pork overnight, but if you’re short on time, an hour will do the trick.

Wrapping the pork in the bacon is so easy. All I did was drizzle a little bit of olive oil in the bottom of a baking dish, place the pork on top, and drape the bacon over it.

I overlapped the bacon slightly, as it will shrink a bit as it cooks. I didn’t want to leave any part of the pork loin uncovered.

Then, just tuck the ends under and roast!

The BEST part about this recipe is that you can assemble it ahead of time. Get the pork all wrapped in its bacon blanket in the baking dish, cover with foil, and roast when you are ready, up to 24 hours later! 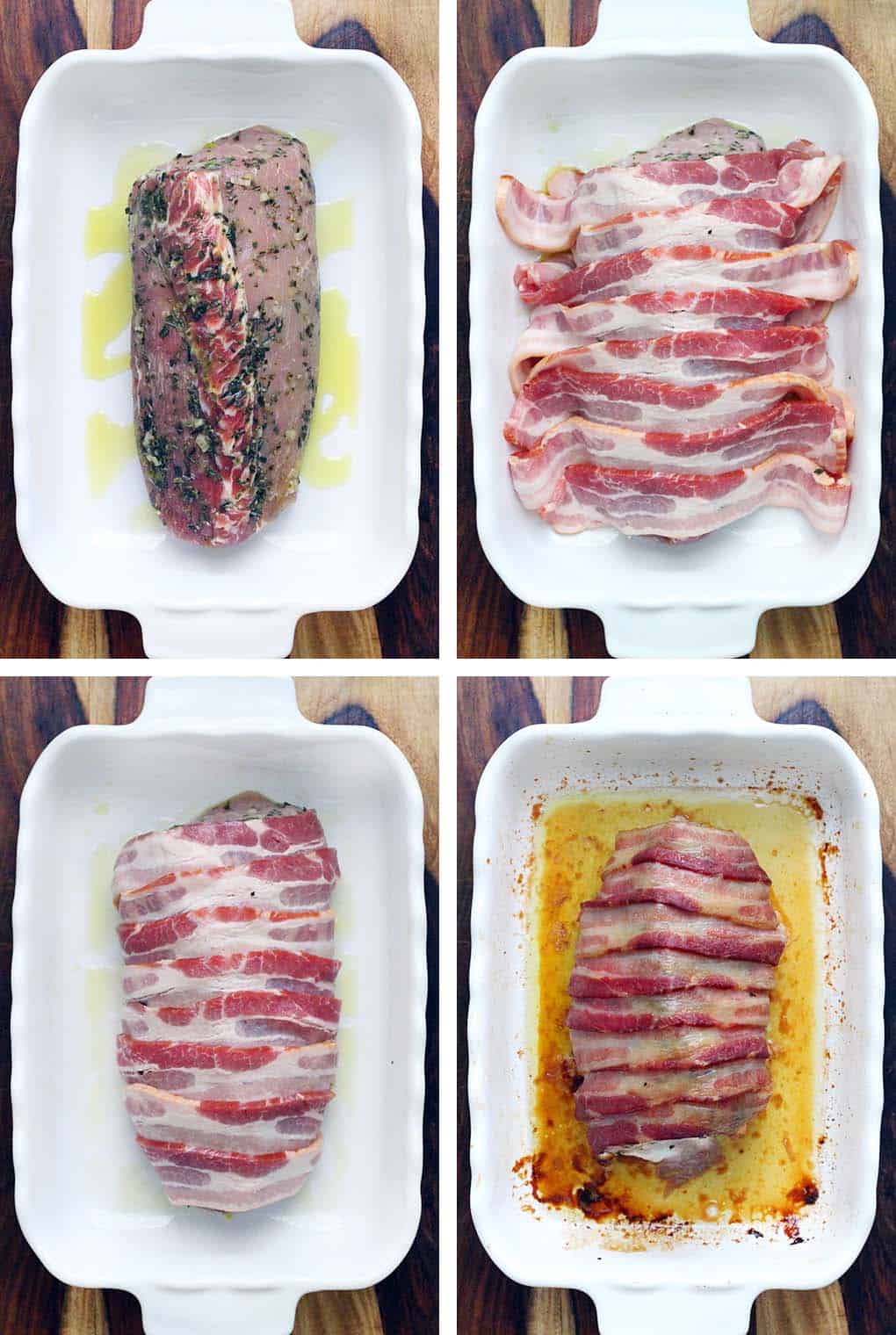 Now, let’s talk about the gravy.

The apple cider gravy made with the pan drippings is deliciously sweet and savory at the same time and pairs so perfectly with the succulent, juicy pork and the smoky, thick-cut bacon.

I collected the drippings from the pan with a baster- it was easy to skim the fat off of the surface and place it in a tablespoon.

The gravy has a base of pan drippings and flour, like your usual gravy, but I used half chicken stock and half apple cider to make it. The result was a delicious, slightly sweet, savory, and tangy gravy. I want to put it on everything!

And by the way, if you want to make the gravy for another recipe and don’t have the yummy pan drippings, just use some butter. 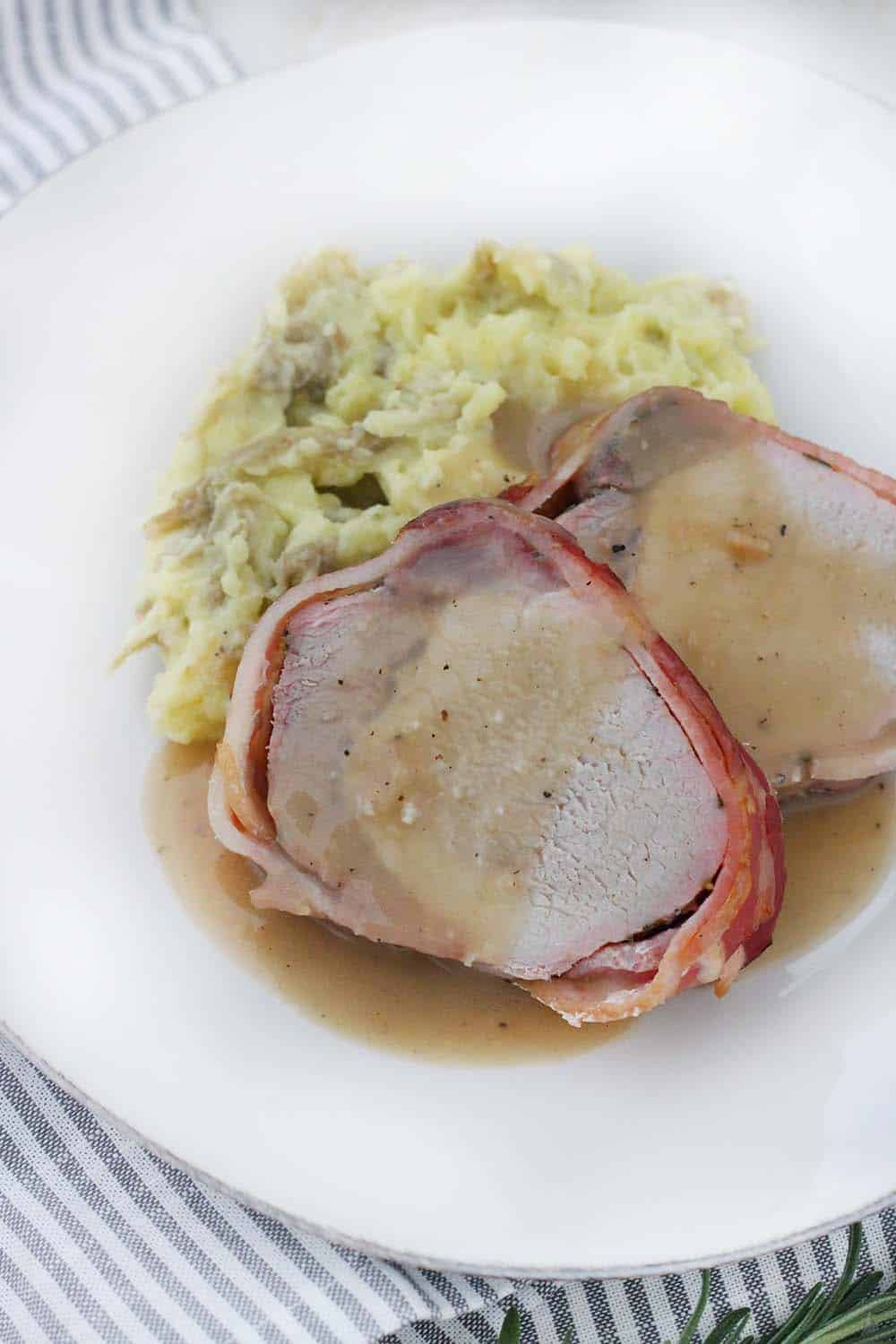 We had this bacon wrapped pork loin with good ol’ classic mashed potatoes. I mean, how can you NOT have mashed potatoes when gravy is involved? It would be blasphemous.

I recommend this Rosemary Infused Potato and Cauliflower Mash if you want to mix things up a bit!

One important thing about making this recipe- make sure to let the pork rest after it finishes roasting. You need to give it at least 10 minutes, and up to about 30, before slicing into it.

Similarly to when you make roast chicken, it’s important to let the meat rest so the juices have a chance to redistribute. If you cut into it too soon, the juices will escape and the meat will be dryer.

Luckily, the resting time gives you just the right amount of time to whip up the apple cider gravy! 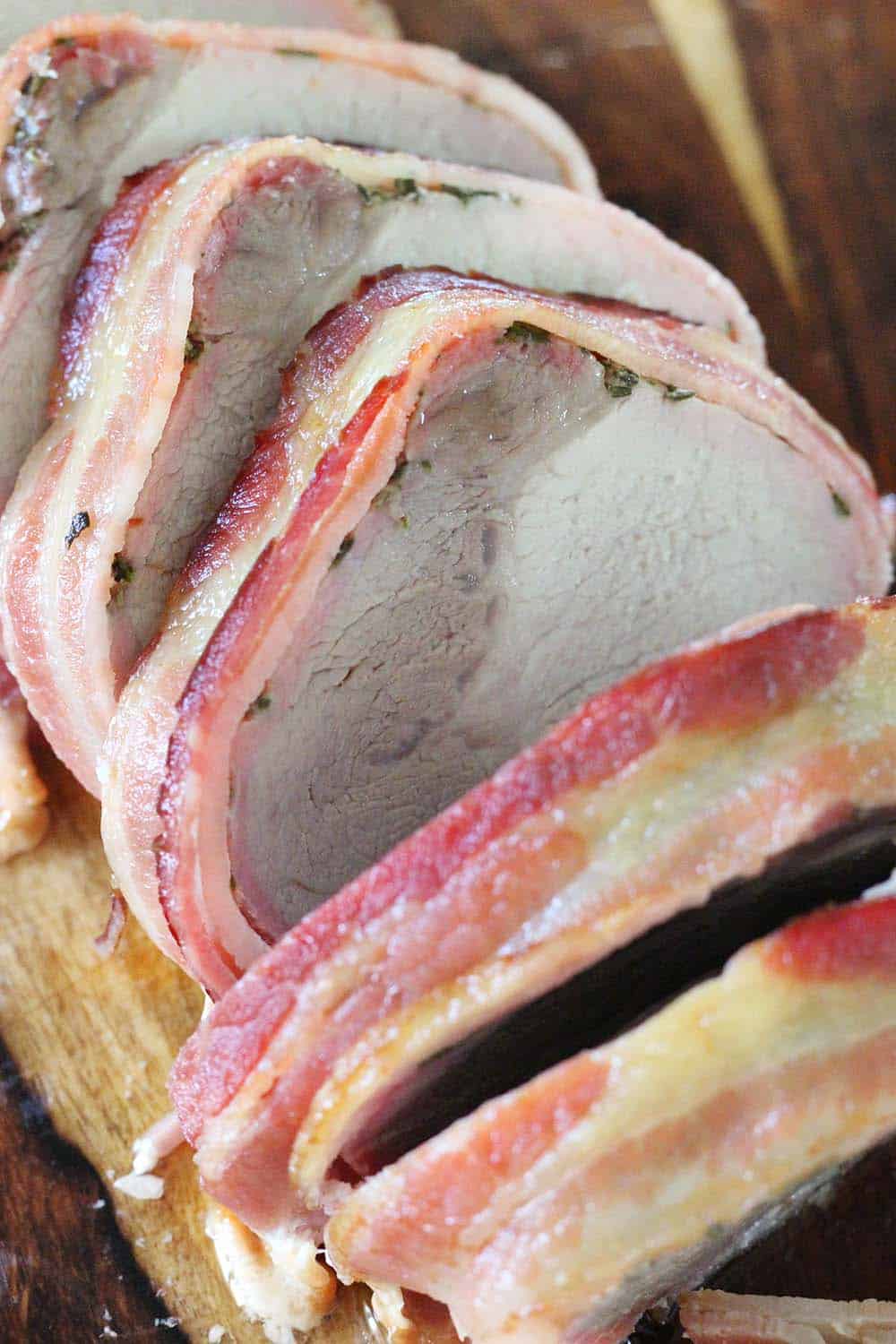 If you love the combination of pork with apples, make sure to try this Roast Pork Tenderloin with Apple Vanilla Chutney and this Instant Pot Pulled Pork. 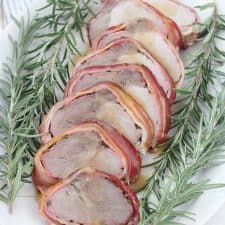 For the Bacon Wrapped Pork Loin:

For the Apple Cider Gravy: