This Rosemary Infused Potato and Cauliflower Mash has fewer carbs AND less fat than traditional mashed potatoes, and it has the wonderful, earthy flavor of rosemary imbibed in every bite. But don’t let that fool you. It’s still rich and super flavorful, and it’s a DELICIOUS alternative for Thanksgiving and holiday meals to regular mashed potatoes! 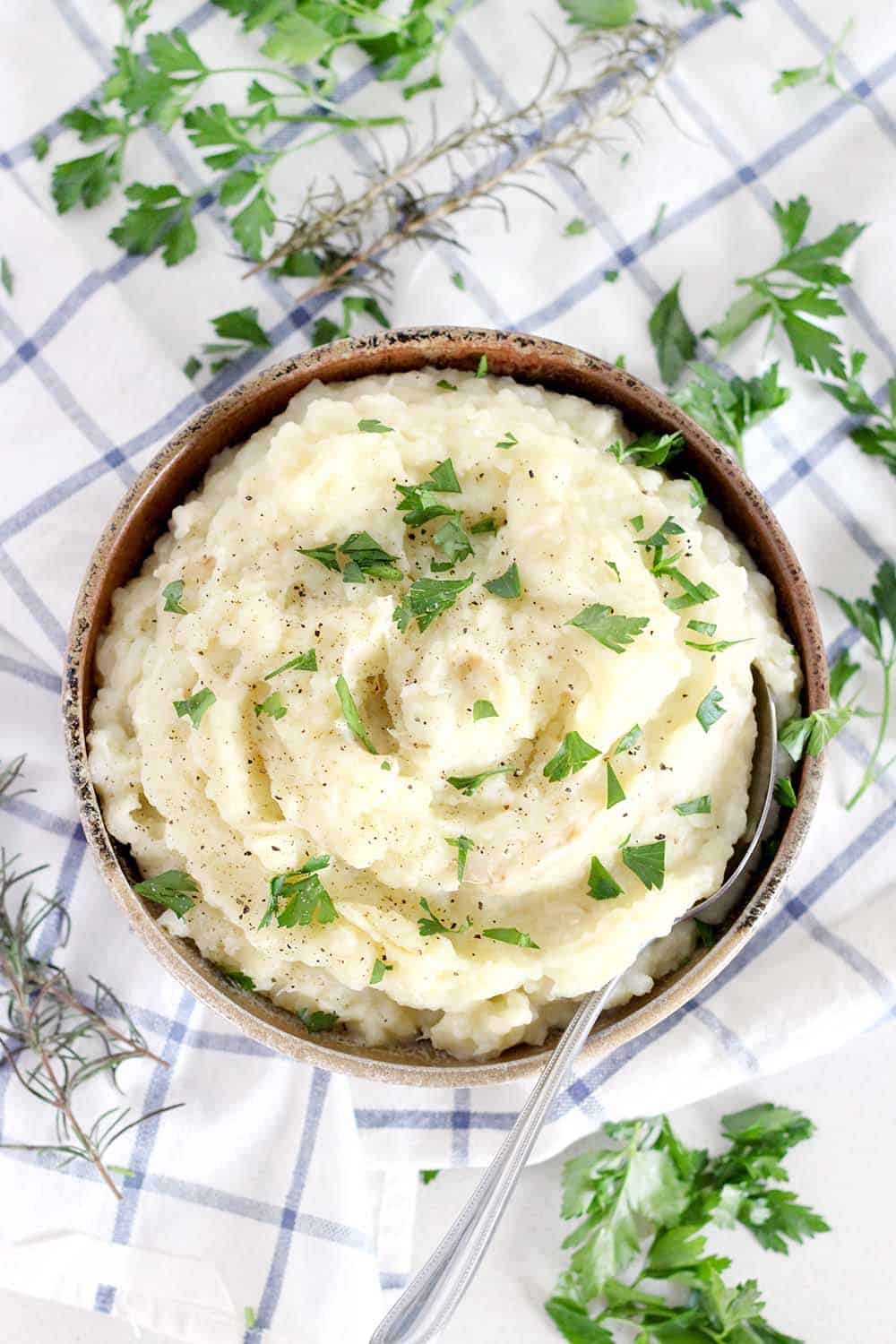 Have you ever had mashed cauliflower as a low-carb alternative to mashed potatoes? I’ve made it once or twice and, while it was certainly edible and tasty for a weeknight dinner, in my opinion it lacked in texture and flavor.

For important dinners like a Thanksgiving meal, mashed cauliflower will just not cut it. But when you use half cauliflower and half potatoes… it’s just amazing.

The texture still holds up well to the fountain of gravy you can (and should) add to it at your Thanksgiving meal. It’s a bit less creamy than the smoothest mashed potatoes, but in a good way- the texture of the cauliflower and the skins from the potatoes (which are left on- yay! no peeling!) make it absolutely delicious with a little bit more bite.

And there’s a subtle flavor from the cauliflower that isn’t overwhelming and goes SO well with the rosemary infusion.

There are two ways the deep, earthy flavor of this dish is achieved.

First, the vegetables are boiled/steamed in chicken broth (vegetable broth can also be used for a vegetarian version) rather than water.

Second, an intact sprig of rosemary is placed on top of the vegetables while they are being cooked, imbibing the flavor into the dish without adding any tough rosemary leaves to the creamy mash. 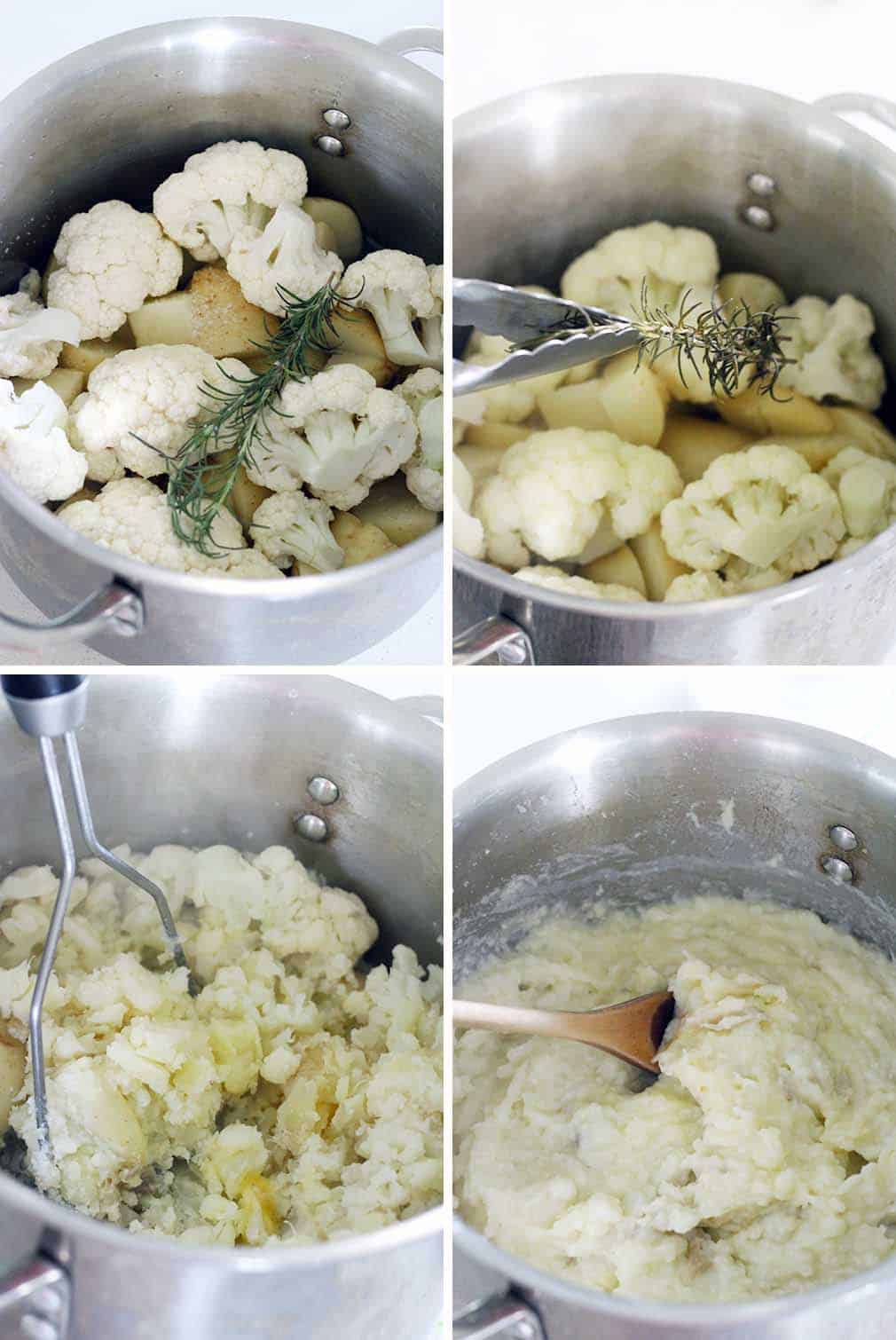 This recipe seriously is SO easy to make.

First, put the cauliflower, potatoes, and chicken broth in a large pot, along with some salt. Don’t worry that the liquid doesn’t cover the vegetables completely- some of the veggies will boil in the broth and the other will cook from the steam in the pot.

Then, place the sprig of rosemary on top and simmer away. When the vegetables are tender, discard the rosemary sprig, drain the vegetables, and mash with butter, milk, and salt just like traditional mashed potatoes.

The whole process only takes about 30 minutes, so it’s easy to whip up while you are waiting for your turkey to be cool enough to carve.

Because the cauliflower and potatoes are cooked in chicken broth and with the rosemary sprig, there’s a lot of flavor to the vegetables before you even add the milk and butter. That, coupled with the fact that cauliflower is naturally less starchy, is why I was able to use less milk and butter.

The recipe still makes for a deliciously decadent mash without quite as much fat as your average mashed potatoes.

Finally, the lower carb count, and the fact that the nutritious potato skins (which have a ton of fiber) are left on, helps make this a healthier dish with TONS of taste that you can feel great about serving for an important occasion. Or, on any random weeknight :-) 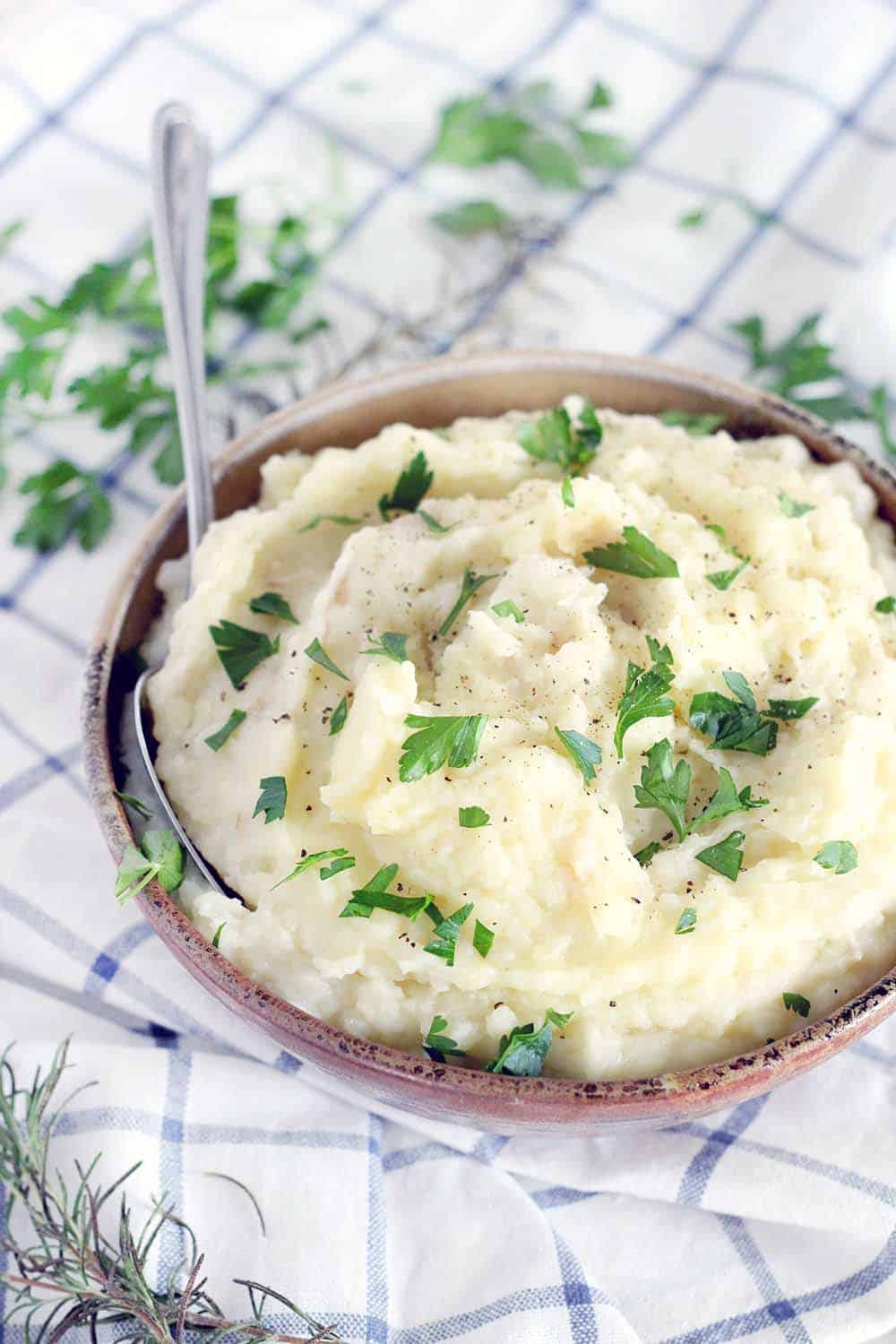 What to serve with potato and cauliflower mash

Recipe for Rosemary Infused Potato and Cauliflower Mash below. 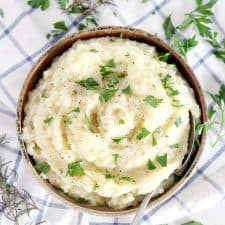