Jump to Recipe - Print
5 from 6 votes

This classic, Easy Salisbury Steak is smothered in a thick, luscious Mushroom Gravy and is a fast, easy, and inexpensive comfort food recipe to make in only 30 minutes! 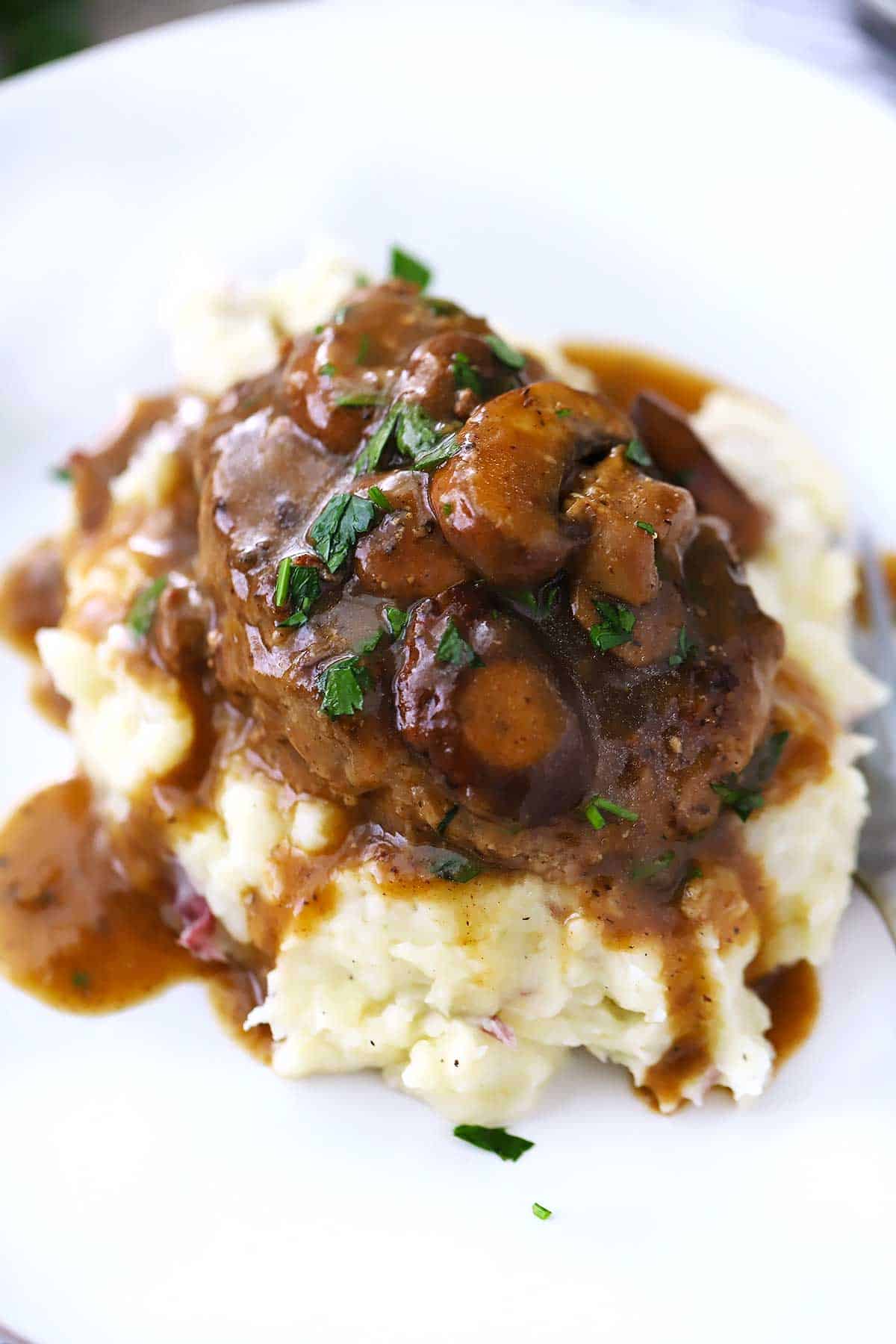 Salisbury steak is one of those ultra-comforting recipes that you can’t help but love. I mean, what’s not to love about it? Especially when it’s covered in a thick mushroom gravy and served with creamy mashed potatoes. It’s like a fast and easy version of meatloaf but WITH GRAVY. Can’t beat that!

I grew up near a town called Salisbury in Massachusetts. When I was little, I used to think Salisbury Steak was named for that town. And until only recently, I thought it was a British recipe named for the town of Salisbury in the UK. Nope.

It’s actually an American recipe developed by a physician named James Salisbury in the Civil War era who recommended eating it as a treatment for digestive issues- he was an early proponent of a low-carb diet. Fascinating!

But enough with the history lesson. I want to get to the good stuff, and let you know what exactly a Salisbury Steak is and how EASY it is to make these salisbury steaks and mushroom gravy in one skillet. 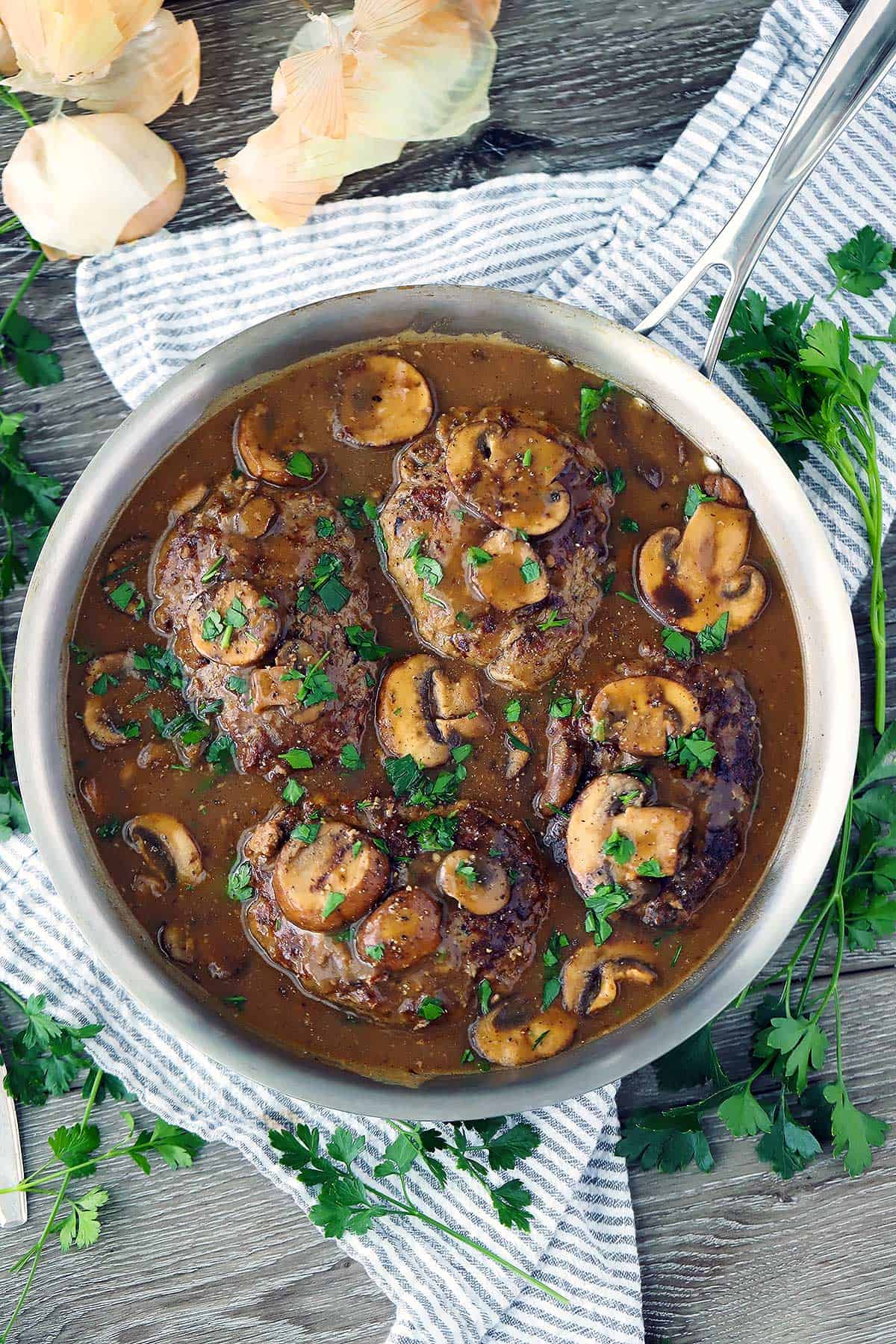 What is Salisbury Steak Made From?

OK so the name is pretty misleading, but a Salisbury Steak is not made from a steak. It’s actually made from ground beef.

It’s basically a big ol’ meatball that’s formed into an oval patty and cooked in a skillet.

But it’s also not a hamburger steak or just a burger served with gravy. A good burger or hamburger steak is nothing more than ground beef seasoned with lots of salt and pepper. A salisbury steak consists of a mixture of ground beef, breadcrumbs, egg, and seasoning.

I used a simple mixture of onion, salt, and pepper for the seasoning, but other recipes often add Worcestershire sauce or other spices to the mix.

So here’s what I love about it: ground beef is cheap! Which makes this Salisbury Steak a super budget-friendly recipe. It’s also easy to work with– you won’t have to worry about overcooking this recipe. 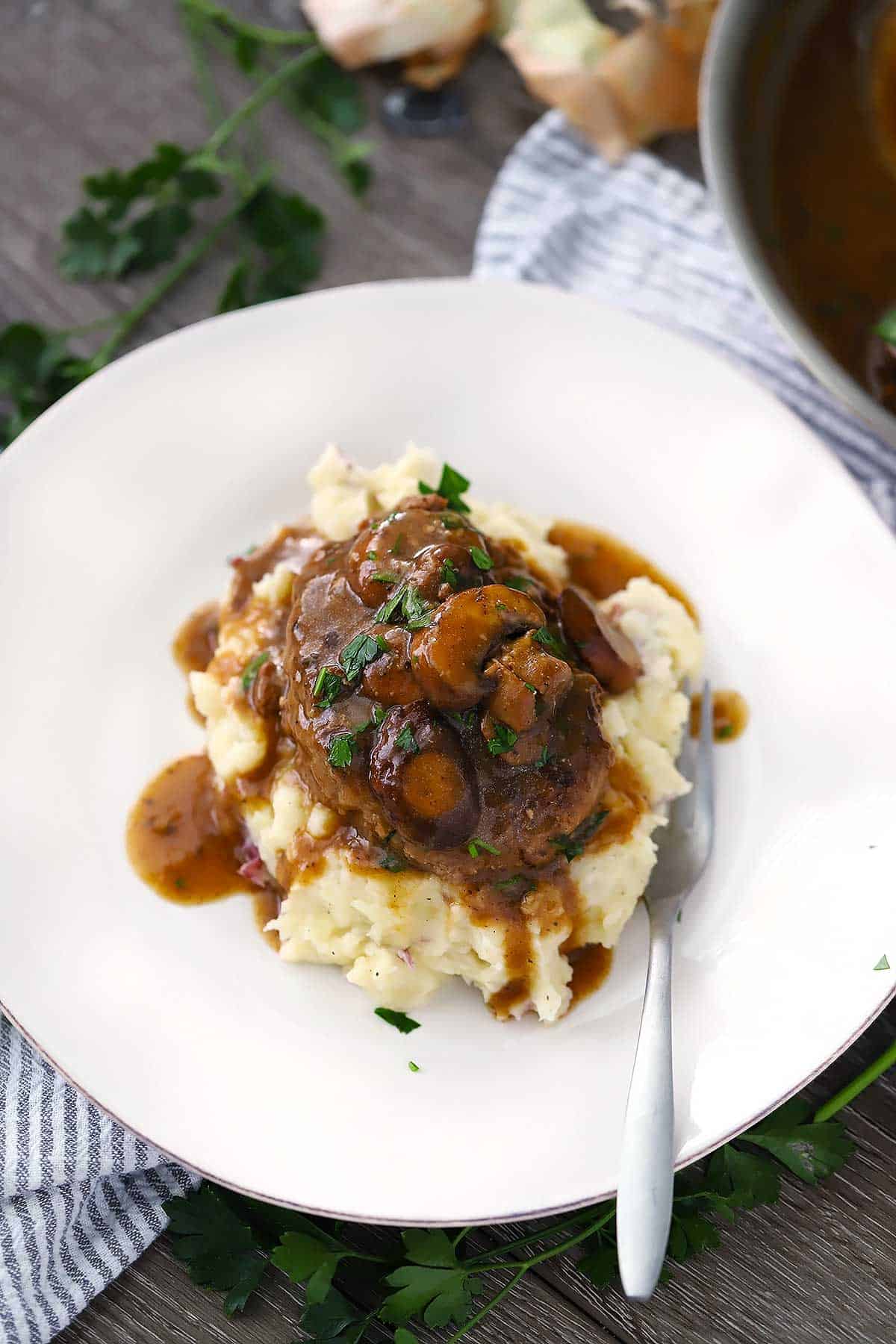 How to make an awesome Salisbury Steak mixture

I’ve got a few tricks for getting a super flavorful result in as little time as possible with only a few ingredients. 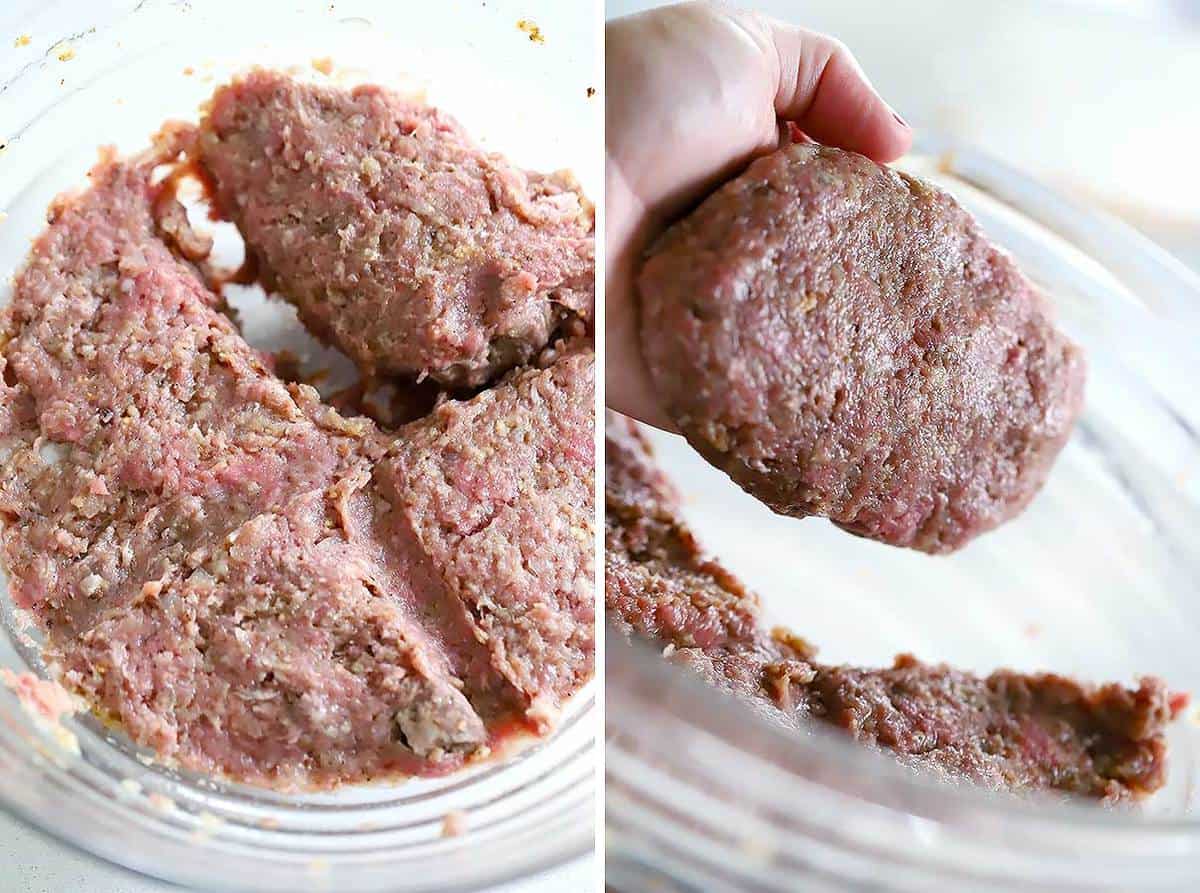 How to cook everything in one skillet

Cooking the Salisbury Steak and the Mushroom Gravy in one skillet enhances flavor AND saves time. 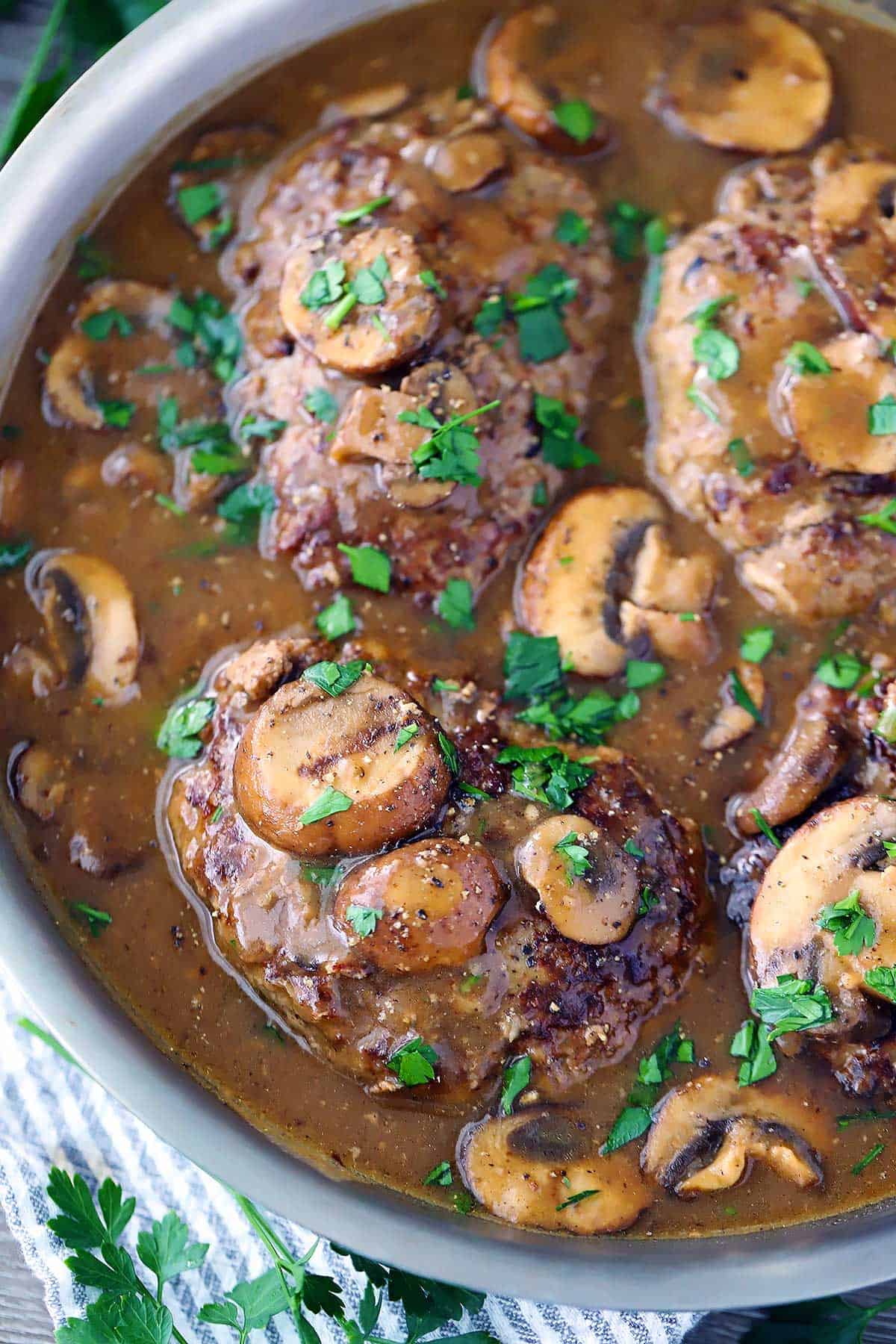 What to serve with Salisbury Steak:

Did you make this Classic Salisbury Steak with Mushroom Gravy Recipe? Please comment below and Rate this Recipe! 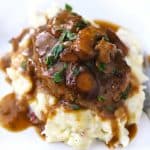 For the Mushroom Gravy:

As an Amazon Associate I earn from qualifying purchases. DISCLAIMERS
3.3K shares
3311 shares