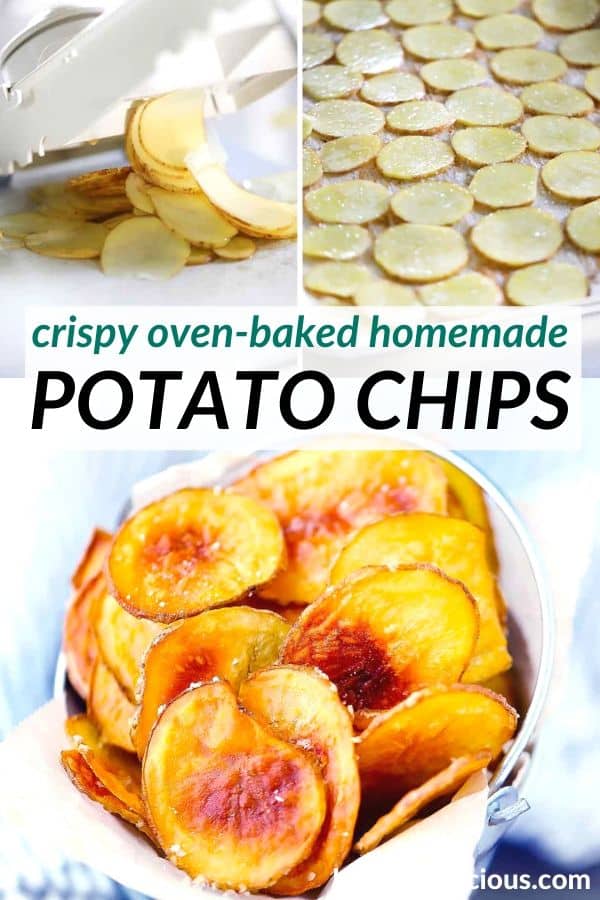 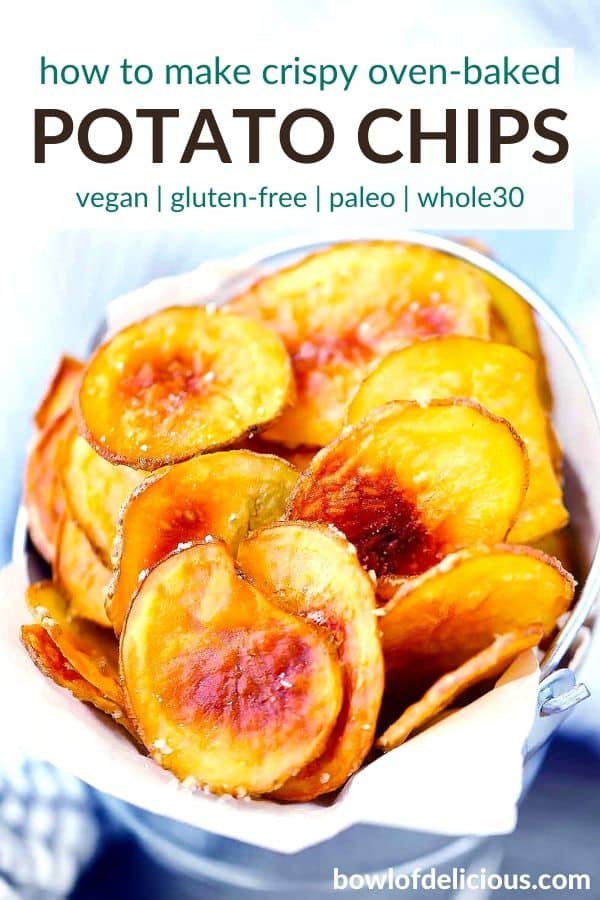 Making Homemade Potato Chips is so easy and healthy, especially when they’re baked in the oven! You only need 25 minutes and three ingredients– potatoes, oil, and salt- to make these crispy, crunchy, addictive potato chips. Eat ’em plain or dunk them in your favorite dipping sauce! 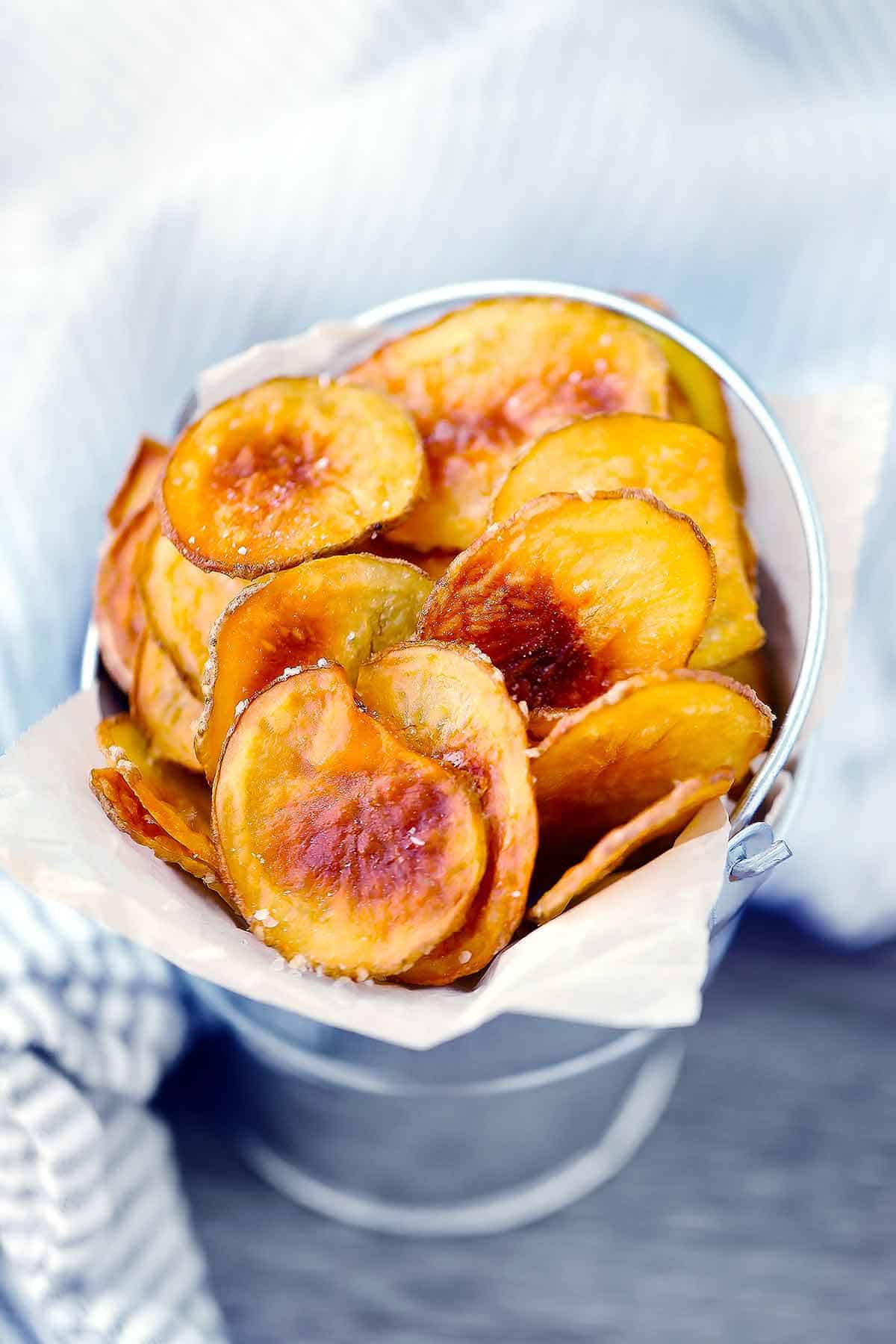 If you have potatoes in your pantry and you aren’t sure what to make with them, I recommend trying out homemade potato chips.

I just love them. They’re everything you love about potato chips- crispy, salty deliciousness- but without the guilt you get reaching for that bag of store-bought chips! These are no unhealthier than roasted potatoes.

In fact, there’s only 1 tablespoon of extra-virgin olive oil in the whole batch!

These homemade baked potato chips are a bit thicker than your average potato chip, which also makes them a bit heartier (read: you might actually fill up on them rather than mindlessly eating chips from the bag until they’re all gone).

And while this recipe calls for only salt as a seasoning, you can add any seasoning you want to these chips!

Here are some tricks for making PERFECT homemade baked potato chips in your oven.

How to slice the potatoes

It’s important to slice the potatoes very thinly and uniformly. Luckily, there’s a handy device that will let you do this perfectly in only a couple of minutes!

A mandoline slicer is your best bet for cutting the potatoes. A mandoline is a handy kitchen tool- you can use it to thinly slice potatoes for chips, cucumbers for pickles, carrots, and any number of ingredients.

And it often comes with attachments for different kinds of slices, such as a grater and a wavy blade that will slice potatoes or cucumbers into ruffles!

What if I don’t have a mandoline slicer?

No worries. You can use a sharp chef’s knife to slice the potatoes as thinly and uniformly as you can. Or, you may have a side on your box grater that will do roughly the same thing!

How to make oven-baked potato chips 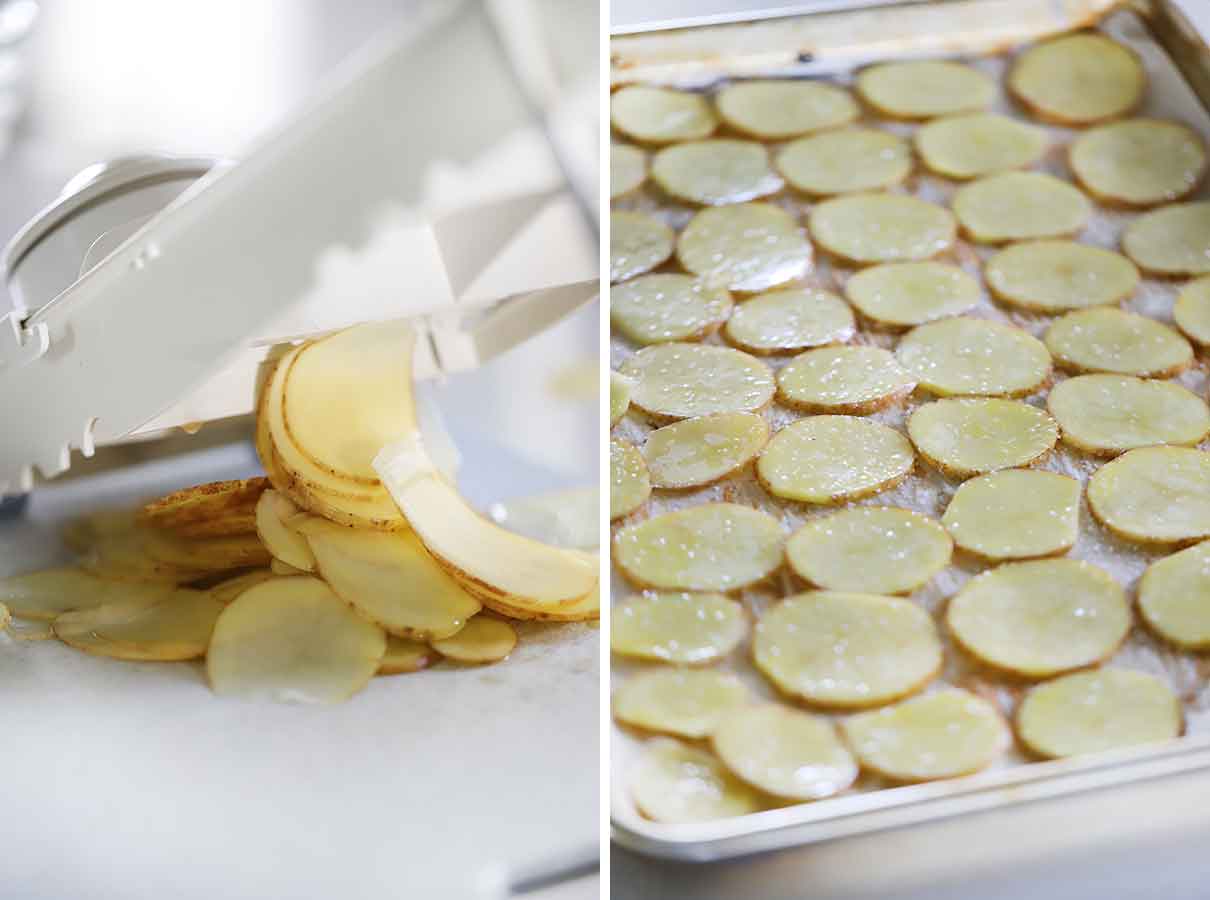 What kinds of potatoes should I use for homemade potato chips?

You can use any kind you want! I used gold potatoes. And best of all, you don’t need to peel them. Just give them a good scrub with a vegetable brush.

Can I use sweet potatoes?

Yes! Follow the same method, but know that because sweet potatoes have less starch and more liquid, they will never get quite as crispy as white potato chips.

They may take a little longer to cook, so keep an eye on them. And if you like, you can flip them halfway through cooking to try to get them to crips up a bit more evenly.

I think sweet potato chips would be delicious with some cinnamon sprinkled on top. YUM. 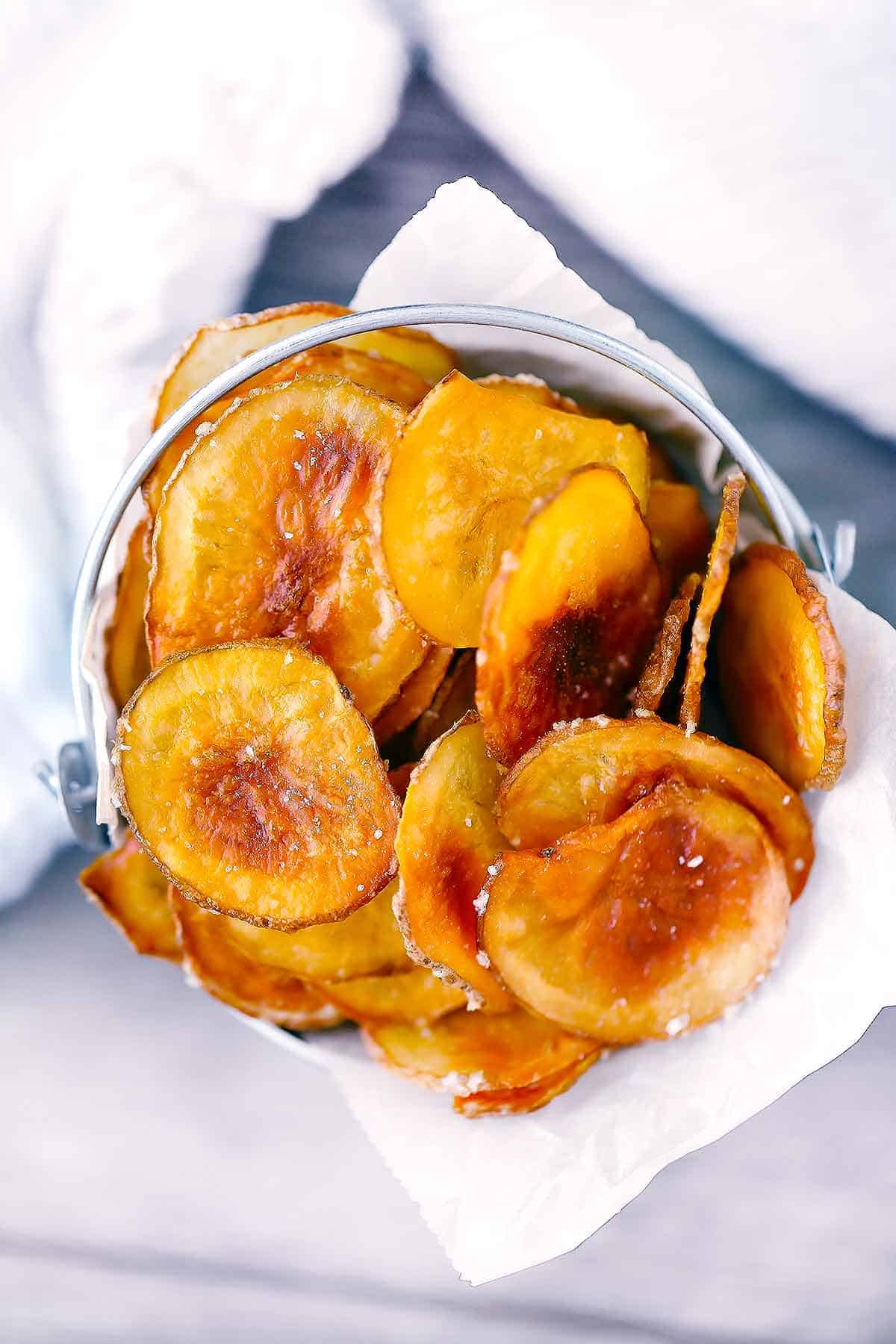 Can I store these for a few days?

But, as long as you dehydrate them really well and they’re super crispy, you can keep them in an airtight container at room temperature for 2-3 days.

What to serve with homemade potato chips

Here are all my homemade appetizer and snack recipes.

Did you know commenting and rating recipes is one of the best ways you can support your favorite food bloggers? If you made these homemade baked potato chips, please click the stars below to comment and Rate this Recipe! 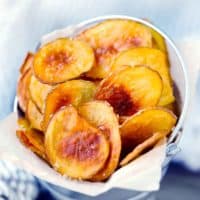 
Tried this recipe?Mention @BowlofDelicious or tag #BowlofDelicious!
« Instant Pot Pulled Pork
20 Easy Pasta Salad Recipes »
Did you make this recipe? I'd love to hear how it went! Comment and rate it below :-)